Tonika Johnson's Folded Map exhibit at the Loyola University Museum of Art gives visitors a look at the disparity between the North and South Sides of Chicago. (Photo: Lukas Keapproth) 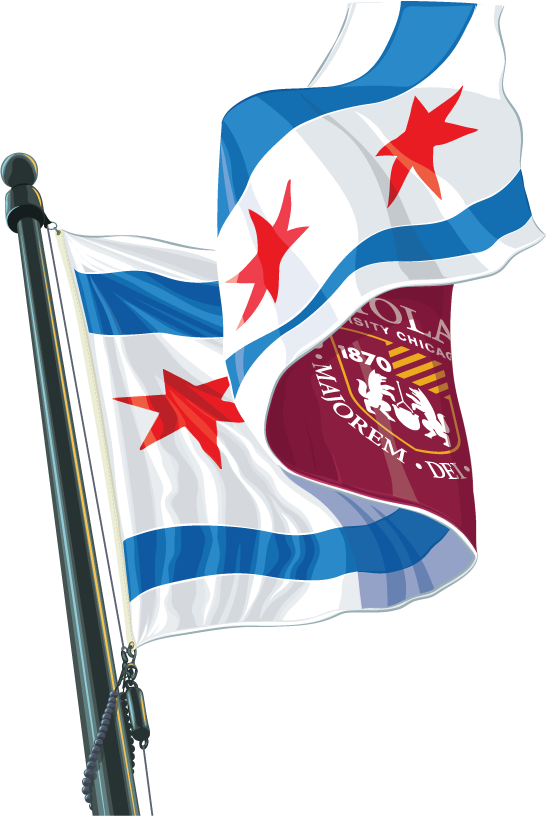 As a teenager, Tonika Johnson traveled every morning morning from her home in Chicago’s Englewood neighborhood to Lane Tech High School in the North Side neighborhood of Roscoe Village. The disparities between the North and South Sides were striking to her then, and as she got older, that experience served as the inspiration for Johnson, a photographer and community activist, to create Folded Map, a project that connects Chicagoans on the South Side with residents at corresponding North Side addresses. Natasha Ritsma, curator at the Loyola University Museum of Art (LUMA), helped Johnson accelerate the ongoing project, which ends its run at LUMA on October 20.

Johnson’s exhibit Everyday Englewood was previously shown at LUMA, but Johnson’s family has an even longer history at Loyola. Two of her cousins are alumni, one of whom played on the women’s basketball team. Her aunt, Kathy Bell, worked at the University for nearly two decades in multiple departments, including the Office of the Provost, until she passed from cancer in 2016.

Here, Johnson discusses her family’s long relationship with the University, how the exhibit came together, and when she finally found hope for Chicago’s future.

So, what made Loyola University Museum of Art (LUMA) the right place for Folded Map?

Well, several reasons—I think that the reason my family connection to Loyola is so strong is also the reason that my artistic connection to Loyola is the same: the commitment to educate people about social justice issues and advance their understanding of Chicago and our society. I know those were strong factors in why my cousin decided to go to Loyola. Those same values are what I share as an artist.

When I was lucky enough to have Natasha approach me to exhibit at Loyola, it just made complete sense to me. I’ve heard nothing but great things about Loyola my whole life through my family, and now I’m being presented with the opportunity to exhibit at Loyola? It was just a no-brainer for me. I was well-aware of Loyola’s very strong commitment to social justice issues. I love to be able to contribute and be a part of Loyola’s legacy, especially since I wasn’t able to be a student like my cousins.

As Chicago’s game-changers: We strive to work, research, and serve by being people for and with others. Find out how we make a difference beyond the classroom. 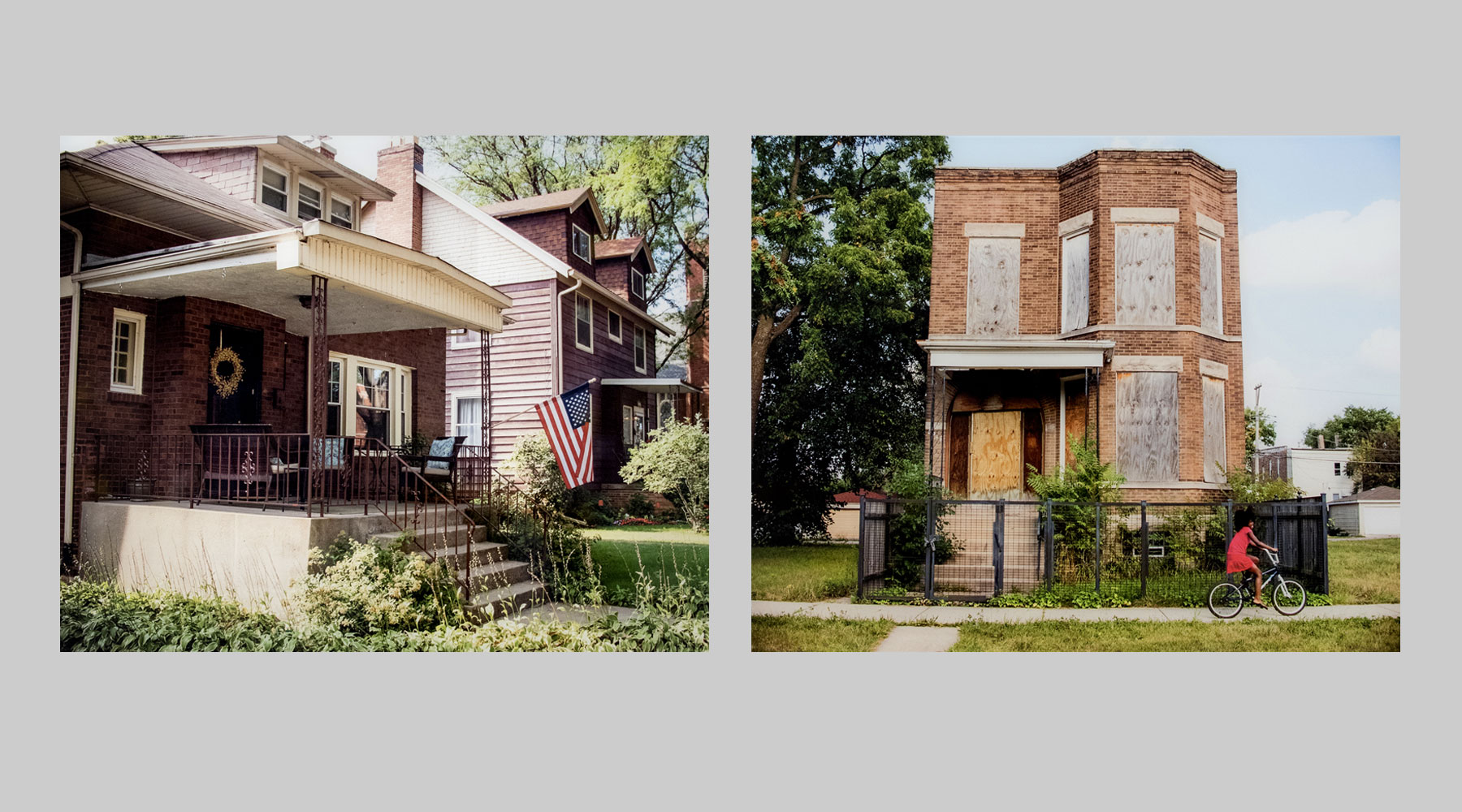 Images from Tonika Johnson's Folded Map exhibit show houses on the 6300 North and 6300 South block of Paulina Avenue. Johnson hopes that her exhibit will bring together people from the North and South sides of the city to have a deeper conversation about segregation in Chicago.

What kicked off the project in the first place? It sounds like there were a number of phases.

The concept for the project started when I was a teenager traveling from my neighborhood of Englewood all the way up north to my high school, Lane Tech. That’s when the observations of Folded Map made an impression on me. I didn’t realize what I was going to turn it into, or if I was going to turn it into anything, until I started getting more active doing community work in my neighborhood. As a parent who’s in Englewood, an adult who’s in Englewood, and as a former homeowner in Englewood, I realized that the observations I had made as a teenager were really critical to the conditions that Englewood is struggling with today. A lot of my fellow residents and community members are actively trying to resolve and work towards solutions for the very same things, so that is what propelled my urgency to do Folded Map.

Personally, I began working on Folded Map last year as a fellow with City Bureau, which is a civic journalism lab. I was finally ready to get it out of my brain, and I wanted to capitalize off of the recognition I had gotten for the Everyday Englewood exhibit and utilize that to really bring awareness to the issues raised in Folded Map. The fellowship is just about eight weeks, and of course, in eight weeks, I didn’t finish the project.

When I told Natasha about Folded Map and she offered to also have that exhibited, I was just really ecstatic. I knew that would be a great pathway to our city having a larger discussion about segregation and inequity. Working with her helped accelerate it, because I was at a point with Folded Map where I had a lot of my Englewood participants identified, but I really needed help securing the North Side “Map Twins.” What I was doing was going up north on the weekends, writing letters, dropping them in mailboxes, probably looking very creepy—and no one responded. So, I asked Natasha if she could help and she brought on board the Center for Urban Research and Learning. We created packets, and some interns in that department actually delivered those packets to the specific block that I wanted to secure a resident from. Within two weeks, people were calling. Loyola was really essential in me securing the North Side participants to Folded Map. I know for a fact that if I were just doing it by myself, it would have taken even that much longer.

Do you see this continuing to grow?

Oh yes—in my mind, I thought I was happy to be done for the exhibition. I was like, oh finally, I can take a breather. But, it has gotten so much attention. I already wanted to do more of the interviews and photos, but I just didn’t imagine how I would secure more people. Thanks to the exhibition and the attention it has received, I have so many people interested and wanting to see more. So, what I did was create an online contact form for people who were interested in participating, because if Folded Map is going to be exhibited and people are going to be learning about it at Loyola, let me capitalize off of that. That’s exactly what happened, and now it’s about 200 people who want updates and want to be a participant.

All of those things made me decide to start the Kickstarter campaign, because everything that I’ve done with Folded Map has pretty much been on my own—me asking friends to help, to donate their videography services. I was borrowing audio equipment from my friends at City Bureau. In order for me to expand it, I really need to secure some funding—not only to do more Map Twin interviews and more photos but to eventually have a curriculum and do Folded Map dinners. I’d love to invite the North Side of the city to Englewood to discuss these things. Folded Map has kind of grown beyond my equipment capacity, so I started the Kickstarter campaign just so I can continue to expand it.

After it leaves Loyola, I don’t know where it will be. My ultimate goal is not only to continue doing Folded Map but to have the exhibit actually online, to have a virtual presence, so it won’t just disappear. Because I think the conversation that we’re starting to have around segregation and people really trying to dismantle it on the individual basis is relevant and it shouldn’t leave with the exhibit.

“I think the conversation that we’re starting to have around segregation and people really trying to dismantle it on the individual basis is relevant and it shouldn’t leave with the exhibit.”Tonika Johnson

Visitors to the Folded Map exhibit at LUMA can plot their own locations on a map of Chicago to indicate that they are interested in participating in the Folded Map project as it continues to grow. (Photo: Lukas Keapproth)

What lessons do you hope viewers will gain from their time in the space looking at the exhibit and interacting with the map at LUMA?

I hope they walk away with an expanded perspective of Chicago. Regardless of what side of the segregation and privilege and inequities they are on, I hope they come away from the exhibit with expanded thinking and a deeper understanding of how history contributed to the present-day conditions of neighborhoods. Even if they are contributing to Chicago’s segregation on a systemic level, we all must know that we’re operating within a system that was ultimately designed to segregate us. Just being aware of that can help people learn how to challenge stereotypes. It can help broaden their sense of engagement with Chicago. It can help people who are told to not go to the South Side and help them challenge that. It can help people who are from the South Side know that there are people who live up north who are willing and want to bypass the stereotypes that have been pushed about the South Side—but they don’t know how. They don’t know who to visit or where to go.

It can really show people that it will require individual one-on-one interaction for us to begin to desegregate our city, because clearly the history of housing policy won’t get us there. It hasn’t gotten us there. As a matter of fact, we’re probably more segregated now than we were before, and it’s really going to take that intimate, personal connection with people for it to happen. And, that’s what I want to show people, give them a model of how to have those uncomfortable, awkward conversations, you know? People can be friends, coworkers in these few integrated spaces in Chicago, but how often do people really talk about the neighborhoods where they live? And what they feel is missing? Separate from politics, just on a personal level as a resident in the city, what don’t you feel like your neighborhood receives?

We don’t have space to have those conversations with different people who have a completely different perspective or life experience, and I just hope that Folded Map becomes that space for people and a model for how they can begin to connect with other residents in Chicago.

Are you seeing now that people are responding to this project and the Kickstarter? Are you surprised by how willing people are to be a part of this conversation?

I was so surprised. Doing this project has restored some of my hope in people and the city, because I was losing it. For me personally, doing this project as a test, really just, it restored my hope to know that people really were seeking this different learning experience. Every time people agreed or called me to say they wanted to be a part of it, I was just like, “Really?” Because I know the questions that I was asking. They are simple but it’s uncomfortable to answer in front of people who you know have a different experience. I just was like, “Oh my gosh, people are really open and honest, and this proves that people want to help change it—and just sometimes don’t know how.”