Mundelein College was founded in 1930 by the Sisters of Charity of the Blessed Virgin Mary (BVMs) in response to a call by Cardinal George Mundelein for a Catholic women’s college in Chicago.

For the next 60 years, Mundelein College offered its students a comprehensive Catholic liberal arts education, enrolling students from many ethnic and socio-economic groups who were often the first females in their families to attend college. In 1991, Mundelein affiliated with neighboring Loyola University Chicago. Today, the legacy and records of Mundelein College are preserved by the Women and Leadership Archives, and the Gannon Center continues Mundelein’s tradition of educating and empowering female leaders.

A brief history of the Gannon Center:

The Gannon Center for Women and Leadership is created.

The newly renovated Piper Hall becomes the home of the Gannon Center and WLA. 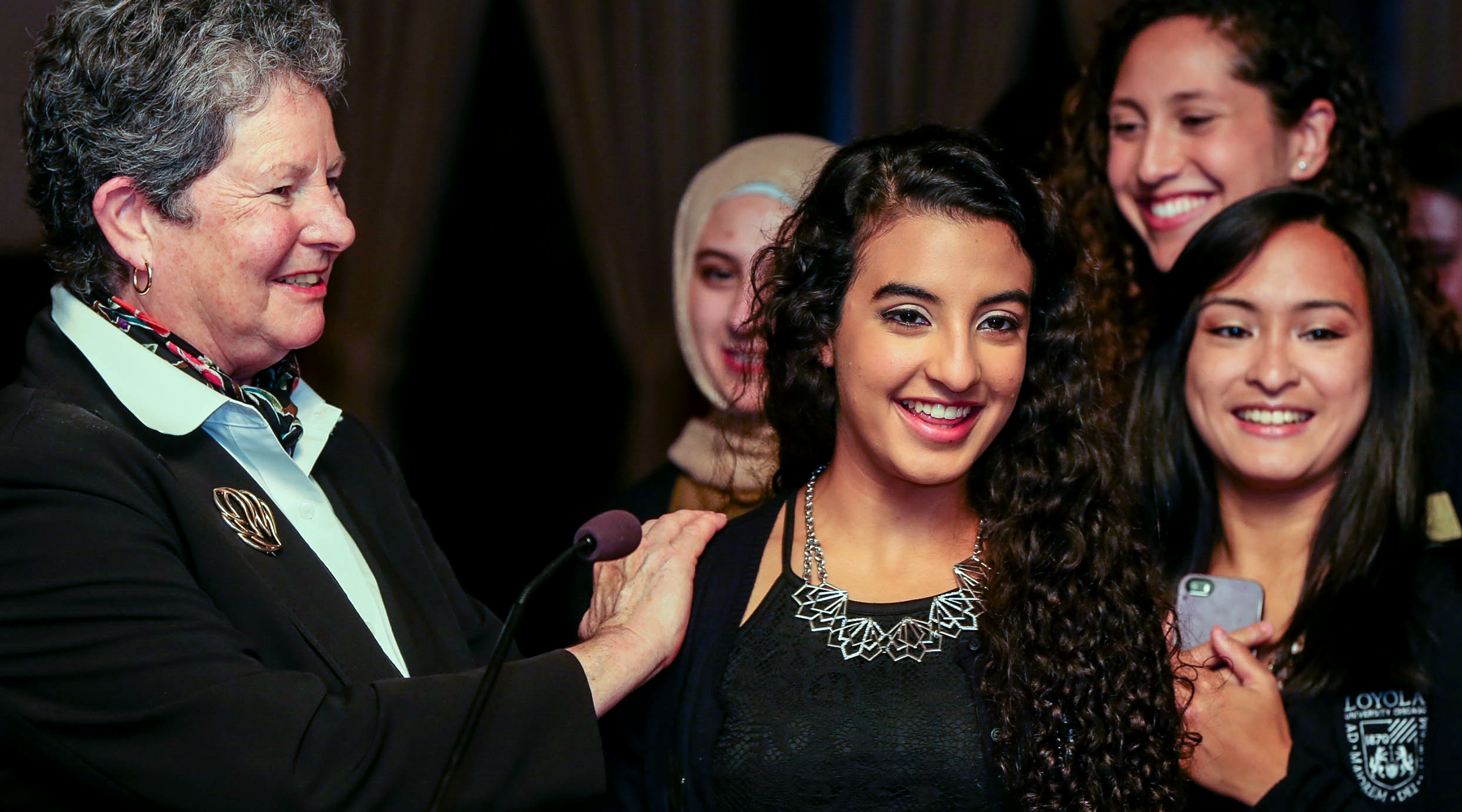 ‘ “It is so heartening to see how these students have their minds and their career opportunities opened in a way that integrates social justice. We want them to be solution builders, not just raising awareness about an issue, but asking, ‘How are we going to address it?’”

The Gannon Center is one of Loyola's centers of excellence, featuring a variety of programs focused on scholarship, research, and the promotion of social justice. Here are some of the Gannon Center's signature programs:

Learn more about the additional work and programs of the Gannon Center here.

alumnae of the Gannon Scholars program since its inception

applicants in 2018 for the program's 10 available spots

Former Gannon Scholars explain how the program influenced them at Loyola and beyond:

“As a first-generation college student, the Gannons were very formative in a time when I needed it most.” 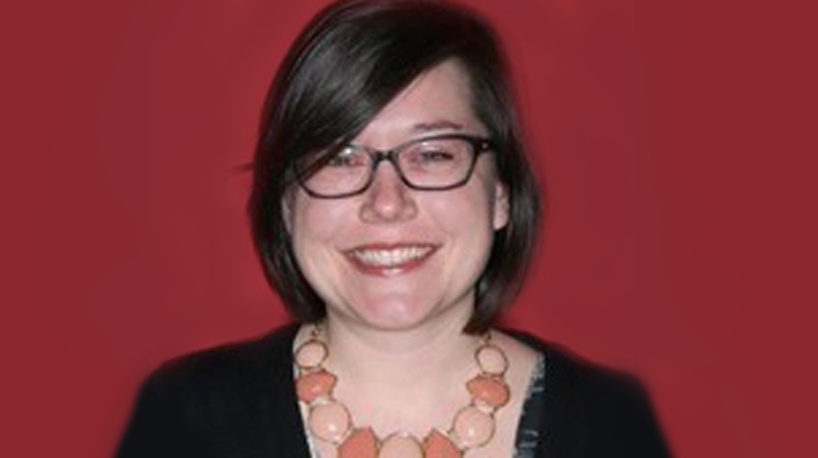 “Being surrounded by such strong women helped me develop my leadership skills and a keen understanding of the difference that I can make.” 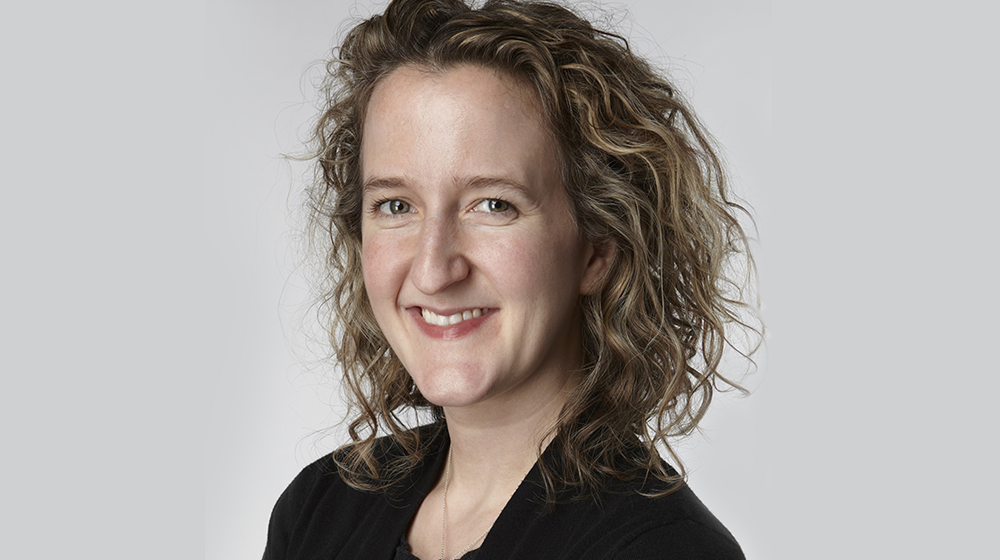 “Our experience united us as a group and empowered us to make a tangible difference.”

Established in 1994, the Women and Leadership Archives (WLA) collects and preserves records of women and organizations that document women’s lives, roles, and contributions. Home to more than 124 collections that together contain thousands of documents and objects related to women’s activism and public service, social justice, women religious, and the arts, the WLA is part of the Gannon Center and Loyola Libraries and is a resource for students, faculty, and the general public.

From an Oscar to presidential campaign materials, here are seven of the most interesting objects in the WLA:

Photos by Lukas Keapproth; All images used with permission of the Women and Leadership Archives. 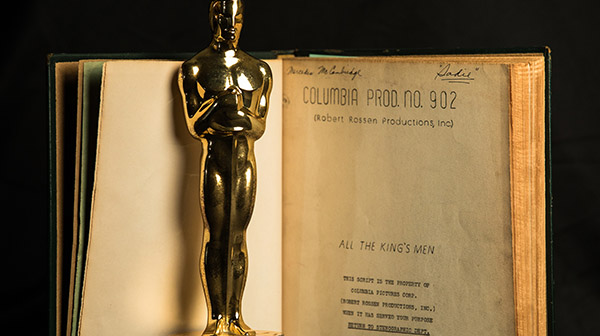 And the Oscar goes to...

Mercedes McCambridge (MUND ’37) won the Academy Award for Best Supporting Actress in 1949 for her role in All the King’s Men. She bequeathed her Oscar, along with her script from the film, to her alma mater. The top of the title page includes her name and the name of her character, Sadie. 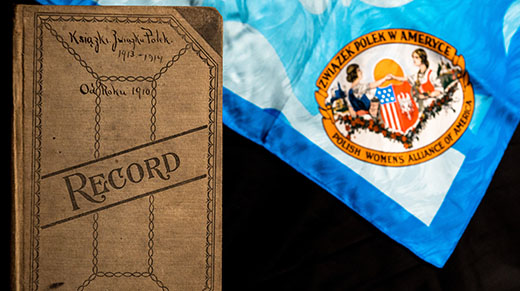 The Polish Women’s Alliance of America, a fraternal life insurance organization, was founded in 1898 to promote equality for women and pride in their Polish heritage, and still exists today. This ledger from 1913-1914 contains records from their meetings, written in Polish, alongside a women’s scarf from more recent years. 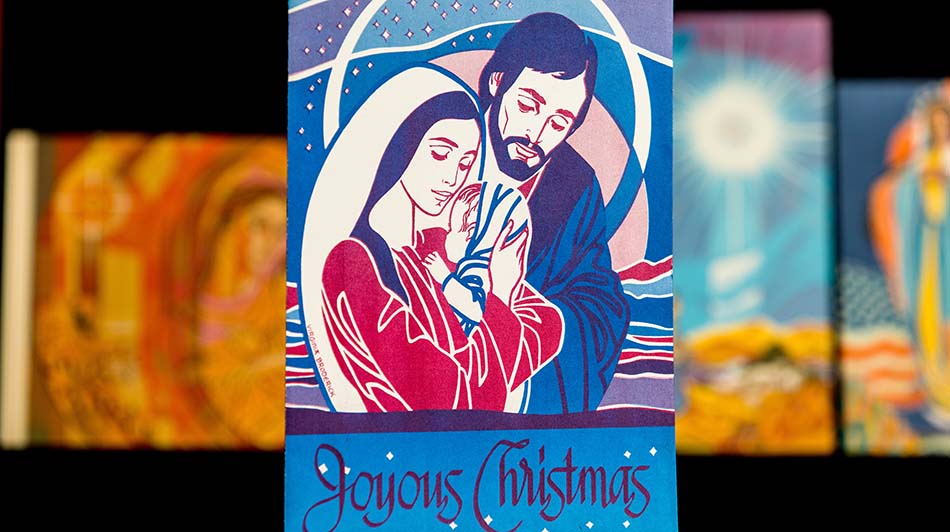 Artist Virginia Broderick (MUND ’39) specialized in religious subjects. Inspired by the Impressionist period, her style uses vibrant colors and lines, as seen in this collection of Christmas cards. Her designs were used on the cover of Catholic missals and also converted into stained glass, mosaics, and statues that can be found in 50 churches across the U.S., Canada, Italy, and Korea.

Poet and writer Eleanor Risteen Gordon was an English professor at both the University of Illinois at Chicago and University of Nebraska at Omaha. Her husband donated her papers and publications to the WLA in 2009, including these two World War II ration books from Risteen Gordon’s childhood in Baraboo, Wisconsin. 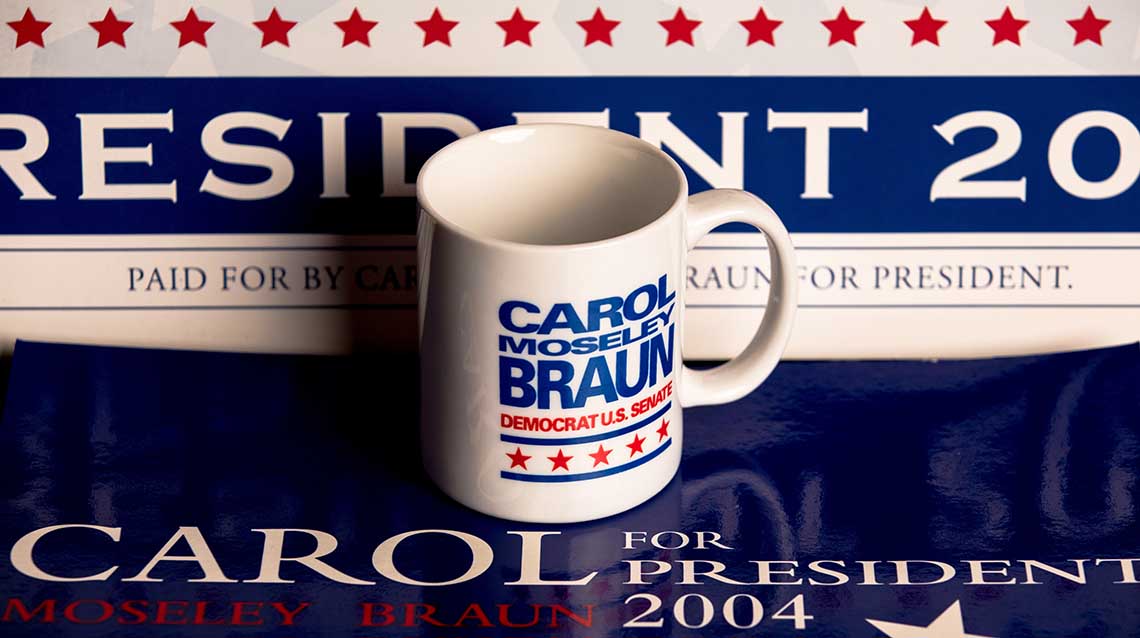 Carol Moseley Braun was the first female African American Senator in the U.S. Congress, a Democrat representing Illinois for one term from 1993-1998. An advocate for women’s and racial equality, Moseley Braun served as the U.S. Ambassador to New Zealand from 1999-2001 and made an unsuccessful bid for the Democratic presidential nomination in 2004.

Inside the FBI files

Mollie Leiber West (MUND ’78) was a leader in the labor and women’s movements in Chicago. West was a member of the Communist Party from 1935-1962, and the FBI kept her under surveillance because of these Communist affiliations. Her heavily redacted declassified FBI file is pictured alongside ribbons from the many labor union conventions she attended.

Marjorie Tuite, O.P., was a Dominican Catholic sister who advocated for an equal role for women in the church and was also a vocal supporter of the civil rights, women’s rights, and social justice movements. This collection of buttons for causes she supported was donated to the WLA alongside other memorabilia, press clippings, and publications that document her life and work.

Who was Sister Ann Ida?

Sister Ann Ida Gannon, BVM, the namesake of the Gannon Center, is an iconic figure in the history of Mundelein College. She served as president of Mundelein for nearly 20 years, from 1957-1975. When she died in June 2018 at the age of 103, the Chicago Sun-Times described her tenure as president as one that “witness[ed] and welcome[ed] waves of cultural change, supporting students and nuns as they marched for civil rights in Selma or a living wage for farm workers.”

A longtime Chicago educator, Sister Ann Ida was a strong presence for Mundelein graduates, keeping them connected to their school even as it joined with Loyola. When Loyola launched a women and leadership center in 1993, it was only fitting that it bear the name Gannon, in honor of Sister Ann Ida’s contributions to both Mundelein College and the advancement of women’s education.

At the dedication for the Gannon Center, she said, “My life is a life of service. That’s what the sisters are all about.”

‘“This is a critical time for women’s leadership and women’s rights... I look to expand our commitment to social justice to include a global perspective and to continue the legacy that has supported the Gannon Center’s ability to provide scholarships and fellowships through financial growth.”