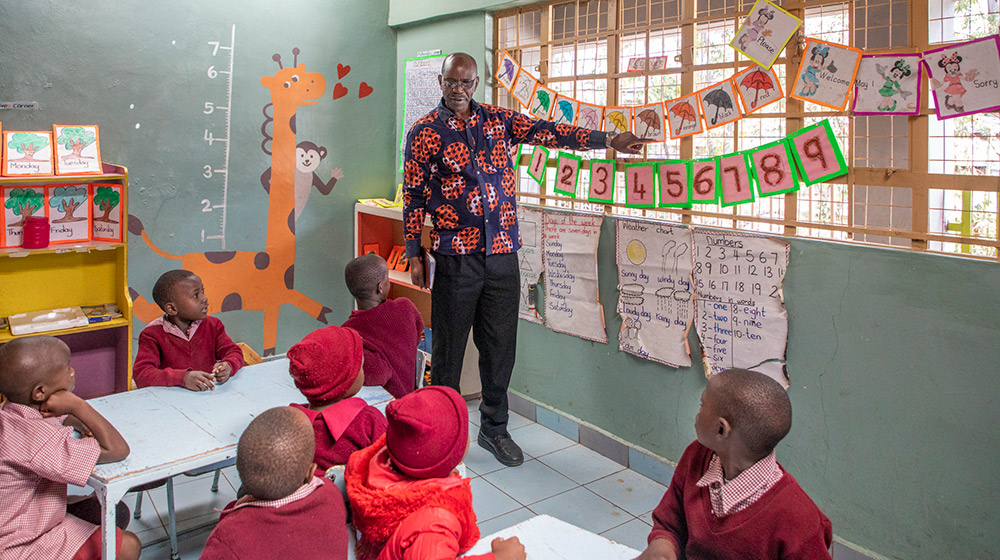 Brother Charles Nuwagaba, a member of the Bannakaroli Brothers of St. Charles Lwanga, teaches students at a primary school and vocational education program near Kenya’s Kibera slum, one of the largest in Africa. Nuwagaba was a finalist for the 2019 Opus Prize. (Photo: Doug Rea, The Opus Prize Foundation)

Brother Charles Nuwagaba (BA ’09, MEd ’11) received a call in February that he felt certain was a hoax. On the other end was a representative from the Opus Prize Foundation, alerting Nuwagaba—the provincial vicar of the Bannakaroli Brothers of St. Charles Lwanga, an indigenous Catholic religious order based in his native Uganda—that he’d been named a 2019 Opus Prize finalist. He’d earned the prestigious recognition—bestowed on a different college campus each fall—for overseeing a primary school and vocational education program near Kenya’s Kibera slum, one of the largest in Africa. (It’s among three-dozen primary, secondary, and vocational schools the Bannakaroli operate.) All three Opus finalists were guaranteed a gift of $100,000. The winner, announced in November, would net $900,000 more.

Nuwagaba had never heard of the Opus Prize, the world’s largest faith-based award for social entrepreneurship. He scurried to his computer to check out its legitimacy. Three months later, the 54-year-old improbably found himself hosting a team of seven judges, students and faculty members who’d flown halfway around the world, from Saint Louis University, to tour his compound and meet the desperately poor people he serves. As he told his visitors at the time, “we tend to reach where other people don’t reach.”

The recognition that Nuwagaba’s nomination provides could be a crucial asset for the Bannakaroli Brothers going forward. The animating principle of the 92-year-old order has always been the education of the marginalized. Its namesake is Charles Lwanga, a page to a former king who was burned alive—along with 21 other Catholics—in 1886, martyred for his faith.

The Brothers’ reach is impressively wide; thousands of Africans from unstable backgrounds have benefitted from their programming in Uganda, Kenya, and Tanzania. Still, they maintain a low profile internationally, with a limited online presence. The 500 members live simply alongside the poor, and rely for financing on farming income, private donations, modest tuition, and parish appeals. 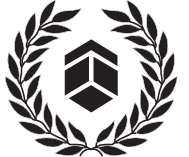 Champions for change: The Opus Prize Foundation has chosen Loyola as its partner to manage the selection process and presentation of the 2020 Opus Prize, which will serve as an integral part of the University’s 150th anniversary celebration. 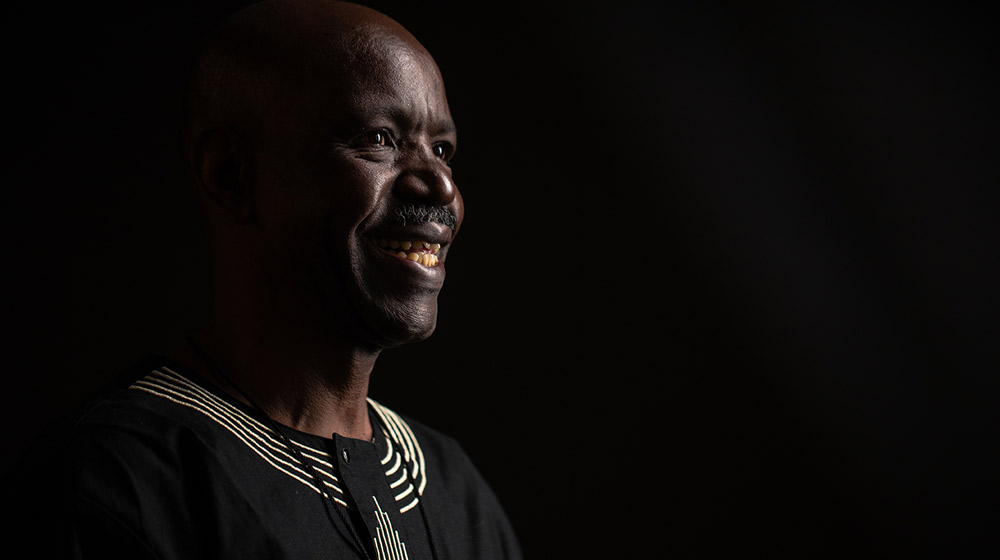 “We’re committed to human dignity and justice. What we’re doing, it’s all about faith and hope.”

Loyola University Chicago counts itself among the Brothers’ most ardent supporters and collaborators. The relationship stretches back to 1987, when the order’s then-superior general visited Loyola president Father Raymond Baumhart, S.J., and asked him if his institution would be willing to host annually several brothers seeking college degrees. Baumhart agreed. The program was underwritten for a number of years by the Conrad Hilton Foundation; since that grant funding ran out a decade ago, Jesuits have paid for room and board while the University covers tuition.

Two brothers are typically enrolled at any given time; over the span of the partnership, some three dozen have earned degrees. Micael Clarke, an associate professor of English, is the Brothers’ academic advisor while they’re in Chicago. “They do extremely well academically because they are very committed,” she says. “They take their vows very seriously.”

Clarke also chairs the Bannakaroli Foundation, a nonprofit organization housed at Loyola that processes external donations through its bank account and raises separate funds (up to $30,000 annually) for seed projects benefiting the order. (The Brothers are ex-officio members of the foundation board.) Just this decade, the foundation has provided backing for a submersible well pump, a hammer milling plant, and an irrigation system, projects that board member Patrick McCarthy (BA ’19) says “are providing the foundation for the rest of the work that the brothers do.”

At the center of that activity is Nuwagaba, tall and lean with a salt-and-pepper mustache and a regal bearing. He was destined to join the Bannakaroli Brothers, in a sense—while his mother was in labor, nurses comforted her by singing hymns dedicated to St. Charles Lwanga. The first name stuck. Their family was not a wealthy one, but Nuwagaba’s mother inspired her children “to always make a difference, to give what we can for the people who don’t have.” At 20, after an introduction to theology and philosophy, Nuwagaba made his first vows.

Within the order, his job responsibilities have shifted over time. The Bannakaroli considers itself a voice for the vulnerable. Their vocational programs are inclusive, offering a wide range of training in subjects (motor vehicle maintenance, hairdressing, hospitality, computer technology, construction) that are portable and practical. Following a stint at Loyola—where he earned a bachelors in economics and a master’s in education administration—Nuwagaba was promoted to provincial vicar and appointed to oversee a resource-challenged secondary school, the St. Joseph Technical Secondary School.

In the field and on mission appeals throughout the Midwest, a practice he started 10 years ago and still carries out every summer, he’s an earnest and passionate Bannakaroli advocate. According to McCarthy, “Charles speaks loudest in a whisper.” “He can connect the ordinary and the everyday to the larger picture,” adds Clarke. 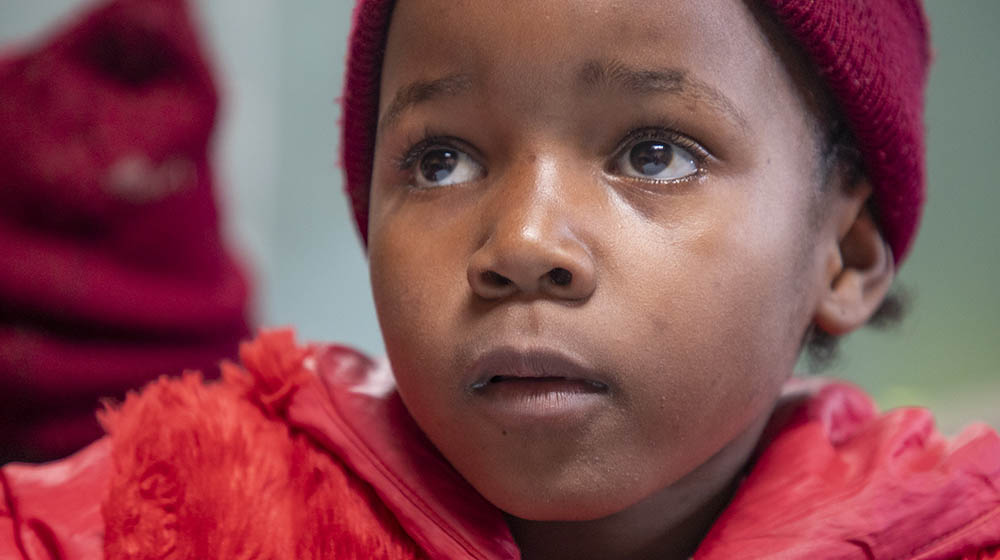 The primary school run by the Bannakaroli Brothers currently enrolls 280 students and 260 young people, including teenage mothers who are enrolled in vocational programs, creating opportunities for children in one of East Africa’s most impoverished regions. (Photo: Doug Rea, The Opus Prize Foundation)

Of all the Brothers’ initiatives, the newly implemented Teen Mothers Program, at Watoto wa Lwanga in Nairobi, caught the eyes of the Opus Prize Foundation. It holds special significance for Nuwagaba, too. The community surrounding the compound, per Clarke, is a “vast, tragic example of human neglect and suffering.” Teen pregnancy is common. In an effort to foster self-sufficiency for those with newborns, the brothers welcome several young women and their babies each day. The mothers receive vocational training and lessons in child rearing; the children are cared for in a nursery. During breaks, the family is reunited for feeding. At lunchtime, the Brothers provide lunch and milk.

A dozen or more have taken advantage of the program in the past year, which fits the Opus Prize’s mission of promoting social innovation among those with deep faith. “We’re committed to human dignity and justice,” says Nuwagaba. “What we’re doing, it’s all about faith and hope.”

The Opus Prize Foundation has chosen Loyola as its partner to manage the selection process and presentation of the 2020 Opus Prize. The Opus Prize is awarded through a year-long partnership, providing unique opportunities for engagement and formation to inspire students, staff, faculty, and the greater Loyola community. As an integral part of the University’s upcoming 150th anniversary celebration, six student scholars will join faculty and members of the Opus Prize Foundation board on site visits in the spring to observe and engage with the finalists and their organizations. After the delegate visits, the University will reciprocate by hosting all three finalists for a week-long celebration in Chicago in November 2020, culminating in the Opus Prize awards ceremony.

Nuwagaba will be on campus to see the process unfold up-close; this semester, he returned to Loyola full-time, enrolling in the Institute of Pastoral Studies to study pastoral counseling. Over his career, he’s met too many Africans who struggle with their mental health and lack options for clinical treatment. For many in Kibera especially, Nuwagaba is the de facto therapist anyhow. At Loyola, he’ll acquire the necessary formal skills. “These are vulnerable people,” he says. “And sometimes they also need counseling. They need people to talk to.”

Earning his second master’s degree will take roughly 18 months, at which point Nuwagaba will pack up and return to East Africa, intellectually and emotionally refreshed. The anointed Opus finalist wouldn’t have it any other way.