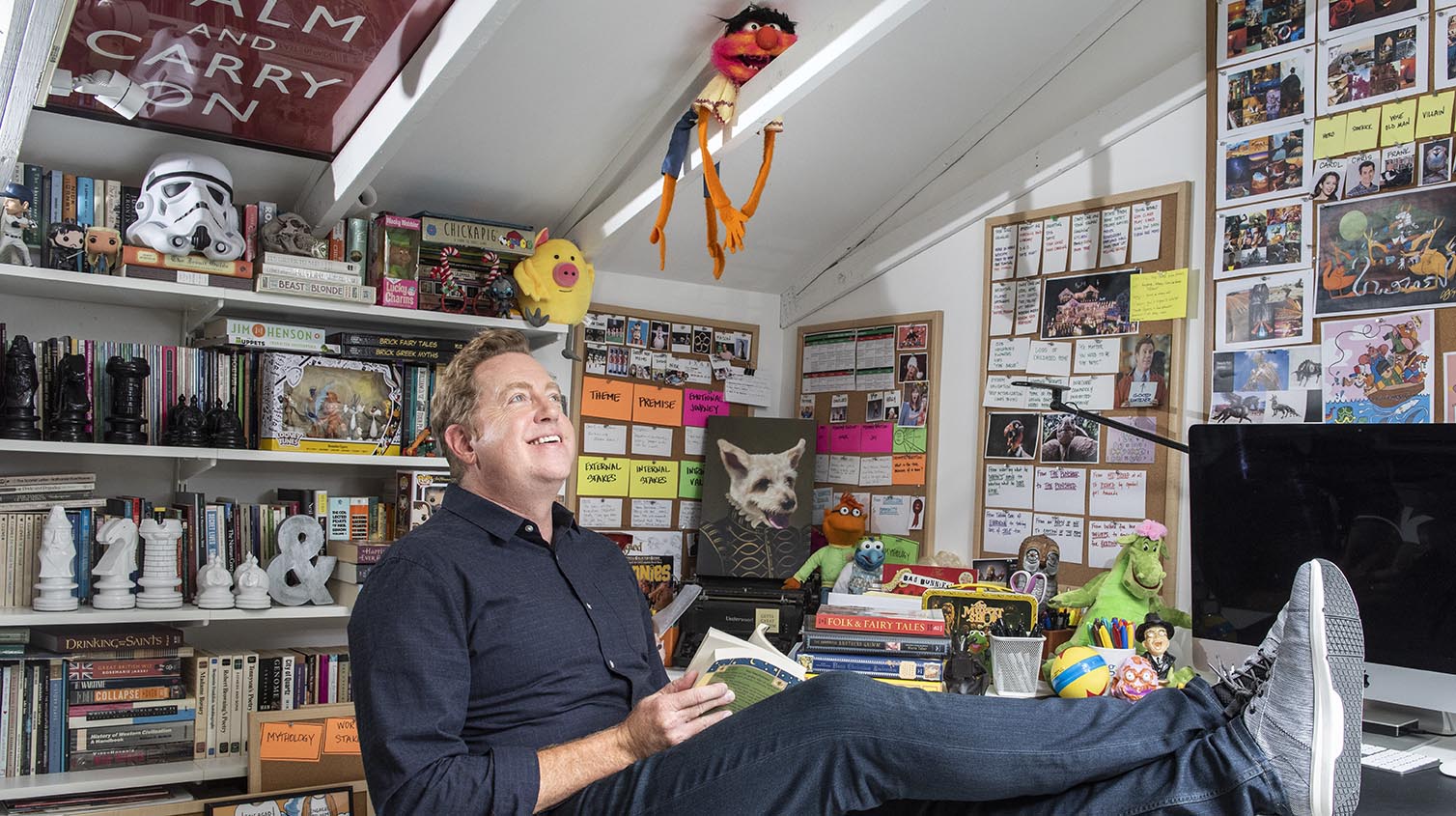 Kelly Younger, pictured in his home office in Los Angeles, has worked with an array of Hollywood animation studios and contributed his ideas to beloved modern classics such as The Incredibles 2 and Frozen 2, as well as a new Muppets series for Disney+. (Photo: Nick Agro)

If you had to sum up the career of Kelly Younger (MA ’96) in three words, it might just be: “Goonies never die!” Watching mid-80s classic The Goonies, where Younger had the chance to see kids as heroes, made him think he could maybe be one himself. And if only kids knew all he’s contributed to their favorite movies, he’d be one to them as well.

Having served for three years as a member of the Disney Animation Story Trust and as a participant in the Pixar Animation Brain Trust, he was called in to contribute ideas to such movies as The Incredibles 2 and Toy Story 4, also contributing additional story material for Wreck It Ralph. And most recently, the highly anticipated Frozen 2. (Note: Younger assures parents he is not responsible for their children’s non-stop singing of this movie’s songs.)

“I feel so lucky to have a chance to work on these films,” he says. “And I get to work with some great minds in the business.”

How does Younger’s role work? Think TV writer’s room. When you see your favorite sitcom or drama’s writing credits, it’s often a name or two. But ideas contributed? That’s usually from many.

“It’s a lot of fun,” he says. “You get to go around the room and see what you can lend. It might be something for many different parts of story. But you’re there to add whatever you can. You’re really getting to play with a bunch of other people who have this ability as well. It’s exciting to see what you can come up with!”

“I like to look at animation as a window for children—that it can open them up to all kinds of worlds.”

How is working on animated films different than live action? “You can have animated characters do anything,” explains Younger. “You don’t require a stunt driver for them—just your imagination.”

Speaking of imagination, Younger is also slated to help bring the coveted Muppets to streaming on Disney+ as co-executive producer of a show for the franchise. “Now that’s a whole different world! You could really feel Jim Henson’s presence in us trying to continue his vision,” he says. “I also enjoyed watching my kid interact with a Muppet!”

It isn’t chance that Younger works on animation—it’s passion. He says that faculty at Loyola University Chicago played a measurable role. “It’s what got me into really writing for theatre which helped get me noticed and led to movies,” says Younger, whose play Mandate won the 39th Samuel French Off-Off-Broadway Short Play Festival.

“[Loyola English professor] Verna Foster just made it seem like a great challenge…And the Jesuit education just makes you think about others, of making yourself of use to others. That there’s more out there than just you. I like to look at animation as a window for children—that it can open them up to all kinds of worlds. That these are movies that can be a real positive in their lives.”

As for parents after their 100th viewing of Frozen 2? The positives for them will be debatable.

Interested in other animated films? Here’s a few Younger says can brighten your world:

3. Pinocchio: “Doesn’t get much better than this dark, scary, joyful fairy tale. An animated character yearning to be real.”

Loyola alumni make an impact in our home city and around the world. Read more stories about how they go forth and set the world on fire.