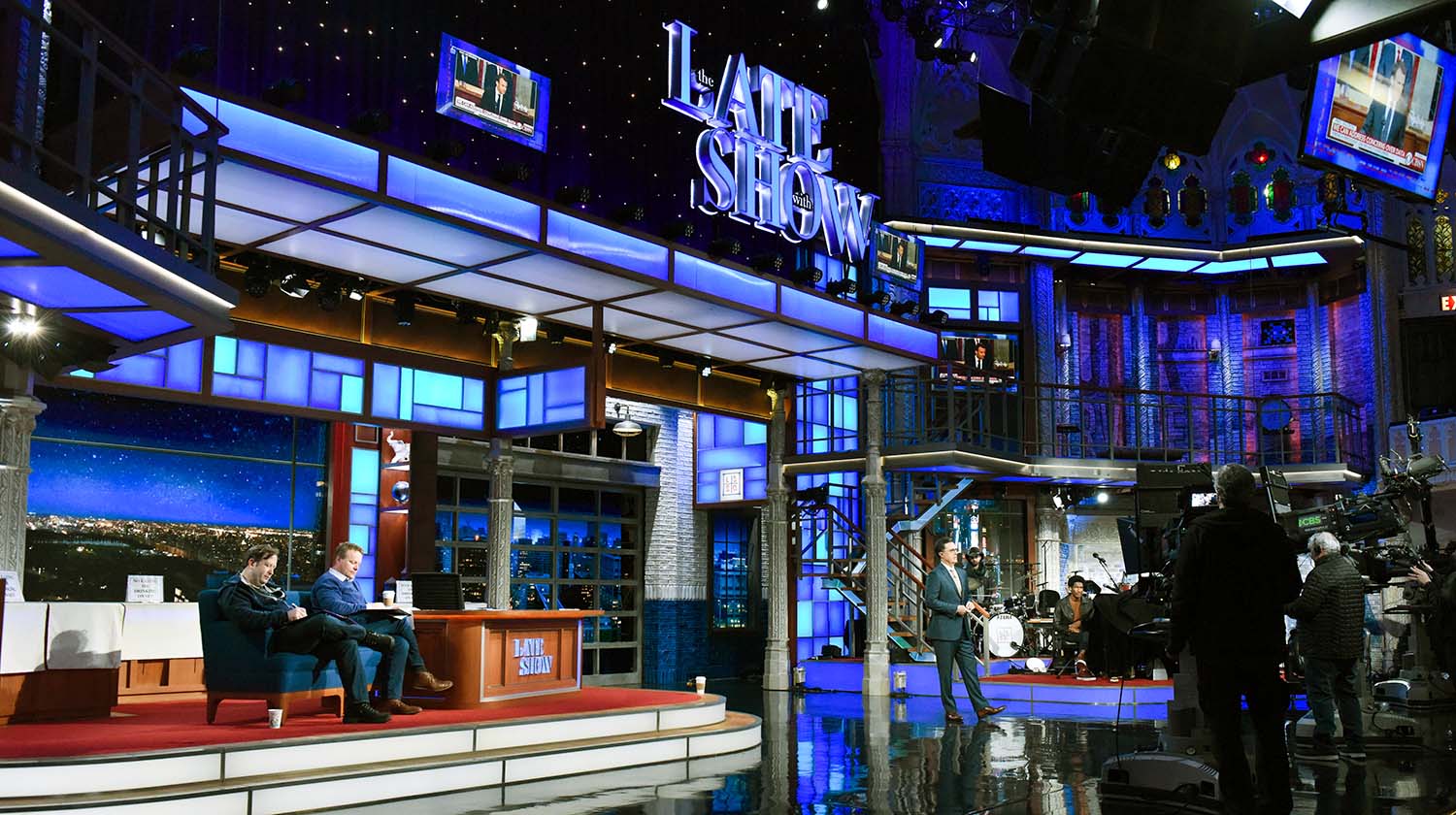 Behind the laughterTom Purcell (BA '85), shown far left, pores over his script during a rehearsal of The Late Show with Stephen Colbert inside the famous Ed Sullivan Theater in New York. Purcell has been a longtime writer and collaborator with Colbert, helping to craft the late night comic's take on the day's headlines. (Photo: Scott Kowalchyk/CBS)

As a freshman at Loyola, Tom Purcell (BA ’85) first experienced the euphoria of performance as he and his roommate perfected their juggling and comedy routine at The Cellar, a coffeehouse run by Campus Ministry. The duo’s big moment came when they took first place in the student talent show that spring. “Getting those laughs from 500 people in the room—it was infectious,” he said.

The hunt for laughs has fueled Purcell ever since. Inspired by comedic greats like Steve Martin and Lenny Bruce, he chose not to follow in the footsteps of his father, former Loyola law dean Charlie Purcell, and instead took improv classes at Second City while performing around Rogers Park. His big break came when a friend happened to read Purcell’s script next to an agent on an airplane—the agent signed Purcell the next week.

But it was during his time on Chicago’s comedy scene that Purcell made an even more important connection: fellow improv comic Stephen Colbert. Years later, Purcell landed a job as a writer for The Colbert Report on Comedy Central and in 2015 followed his boss to CBS’s Late Show With Stephen Colbert. Today Purcell is an executive producer of the Late Show, where he oversees the show’s writers and helps write and polish Colbert’s material.

It’s a lot of exhausting, 12-hour days as the team races to produce 200 shows a year. But for Purcell, it’s worth it to make an audience smile. “Sucking on the drain pipe of the news the past couple of years, you can take in a lot of poison,” he said. “We have an emotional response to the news, and our No. 1 goal is to entertain fans of our show and make them laugh at a time when a lot of people feel despair. The country has crossed some lines that we didn’t think we’d cross, and it’s our job to lighten the mood and try to make someone’s day a little better.”

Tom's tips for adding a little more humor to your life:

1. Take an improv class. You’ll have fun and be forced to get out of your shell.

2. Laugh at the absurdity of everyday life, especially when you’re stressed or scared. You can’t be laughing and afraid at the same time.

3. Make yourself laugh before you worry about making others laugh. 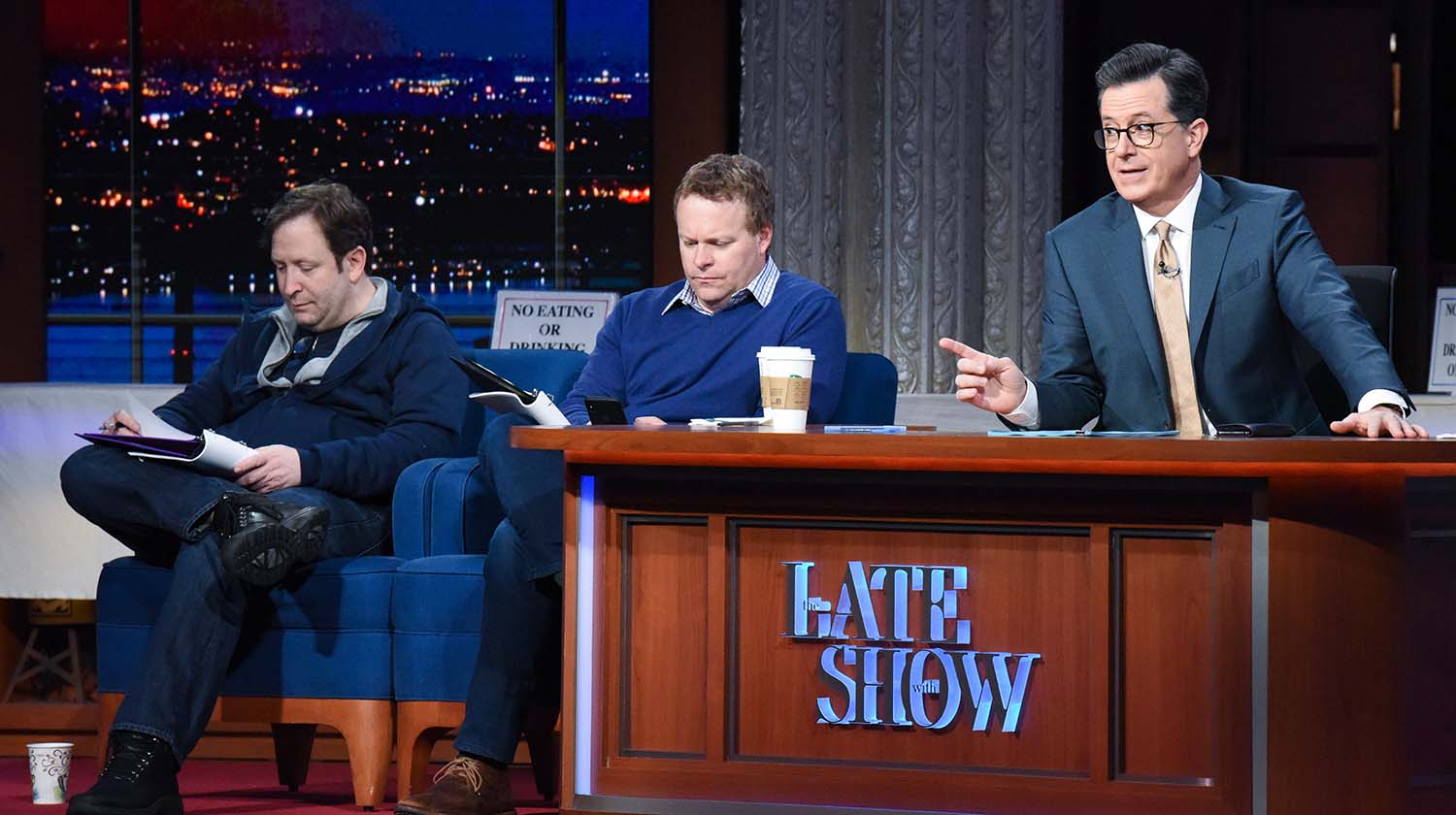 Keeping it fresh Purcell, left, works with the show's writers to polish Stephen Colbert's material, trying to find new and clever ways to put a humorous spin on what can be at times depressing stories. “Sometimes you’ll be washing dishes or walking down the street, and the best idea just comes to you, fully formed, and you just have to write it down,” he said. “And others require a lot of bloody sweat.” (Photo: Scott Kowalchyk/CBS)

As the former English major looks for laughs in the day’s headlines, Purcell frequently draws on his Catholic, Jesuit education—something that has been a real asset in working for a comedian known for using Catholic humor. His time at Loyola also shaped his value system over time. “The idea of living for others... I can’t say it sank in that well in my 20s. It’s something that's aged in me much better.”

After college, Purcell took a job at Loyola’s law library to pay the bills while working on his comedy routine. His parents hoped he’d go to law school, but despite doing well on the LSAT he knew that it wasn’t for him. It was on Father’s Day that he broke the news to his dad, who was skeptical yet supportive. “He’d slip me money for classes on improv, even though he wasn’t sure it was the career for me,” Purcell said. “When your kid is earning $23,000 or less and they’re 26 years old, it makes parents worry.”

Those improv classes also helped him develop as a writer. “You get a little less precious with words and learn to go with the flow," he said of the experience. "We used to go on stage and fill up half an hour without batting an eye. But filling a half hour of a scripted show, you’re sweating blood. One of the hardest things about writing is having your editor brain on at the same time as your creator brain. Improv helps you shut up that editor brain in the first draft.”

Sometimes it’s challenging to find a new comedic spin on the same old news topics. But being a professional writer means showing up, whether the muse has clocked in that day or not. “Sometimes you’ll be washing dishes or walking down the street, and the best idea just comes to you, fully formed, and you just have to write it down,” he said. “And others require a lot of bloody sweat.”

He and his colleagues at the Late Show continue to find the funny in the unexpected. Sometimes that means writing about very serious issues, and Purcell said he’s careful never to turn someone’s tragedy into joke. People who are dishonest, however, are often a good target for comedy.

“You just have to see the specifics,” he said. “The general of a lot of these stories isn’t funny, but if you get to the specifics, you can see something humorous.”