Sandra Kaufmann, founding director of the dance program at Loyola University Chicago, discovered dance as a way to express herself without words. Now she imparts those lessons on her students. (Photo: Lukas Keapproth)

Art with Impact Activism through dance

Language can be limiting. To Sandra Kaufmann, the founding director of the dance program at Loyola University Chicago, that’s what makes dance so appealing: it allows for the “sublime expression of what you cannot express in words.”

Kaufmann came to this realization after signing up for “dance studies” during gym class at Lyons Township High School in Chicago’s western suburbs. She’d grown up a working-class kid in Brookfield, Illinois, “with zero artistic exposure, at all.” She never visited museums or went to concerts; on weekends, her folks took her to stock car races and demolition derbies. They didn’t know the first thing about Pirouettes. They drove motorcycles.

But their teenage daughter took to her class surprisingly quickly. “I was totally enriched by it,” she says now, from her corner office on Mundelein’s ninth floor. “To me, dance was a total activity: body, mind, spirit.” By Kaufmann’s senior year, she was training every day with a club called Eurhythmics. Northern Illinois University awarded her a scholarship for dance and health education.

A few years later, while studying abroad in London, she choreographed “A People’s Cry,” inspired by the horrors of South African apartheid. That protest piece—in which a quartet dance handcuffed—was included in the American College Dance Association’s prestigious annual festival, and the group offered Kaufmann its sole national scholarship to the Martha Graham School, a renowned modern dance company in New York City.

Kaufmann’s life trajectory had veered hard toward the arts in half-a-decade. “A path opened up for me,” she says. “Once I found the environment, I’m a person that likes to go big.”

Keeping ballet in business: Jessica Pedroza hung up her pointe shoes to take a deeper look into the operations side of the Joffrey Ballet.

This idea, of using dance as an aesthetic instrument of change, was forged during her training; Kaufmann’s eyes were widened by the instructors and fellow artists she met, people whose lived experiences were so unlike her own. It influenced her nine-year tenure at Graham, where she climbed the ranks from scholarship student to first company soloist to faculty instructor. She also baked it into the culture at Loyola, with a program she developed and has overseen since 2007.

The curriculum is rigorous; not unlike peers at traditional dance conservatories, Loyola students take ballet daily, drilling themselves in the finer points of pointe. That technical competence is achieved under a streamlined schedule, though, leaving room for students to enroll in liberal arts classes simultaneously, activating both sides of the brain. And a culture of activism is ever-present in their studios.

Ramblers dance at climate change conferences and in after-school programs for at-risk students. They’ve formed a dance honor society with a service mission. They’ve selected material for recitals that spotlights societal injustice. Dance at Loyola is understood as a form of rhetoric, a metaphorical voice for the voiceless. “Students have to build the megaphone, manipulating their bones and muscles,” Kaufmann says. “Then they have to be the voice behind the megaphone.”

Wrapped in a stylish scarf on a gloomy spring morning, Kaufmann speaks enthusiastically about the development of dance at Loyola, from pie-in-the-sky proposal to a Department of Fine and Performing Arts cornerstone. When it started, there was no dedicated rehearsal space; Kaufmann laid marley flooring on the first level of Mundelein, in a nook that was previously a cafe. They held bake sales to raise funding.

Now there are three full-time faculty members, 125 students, more than 30 dedicated majors, and a sparkling stage. Rehearsal spaces in the Fine Arts Annex are overflowing with talent. Graduates are already dancing professionally. 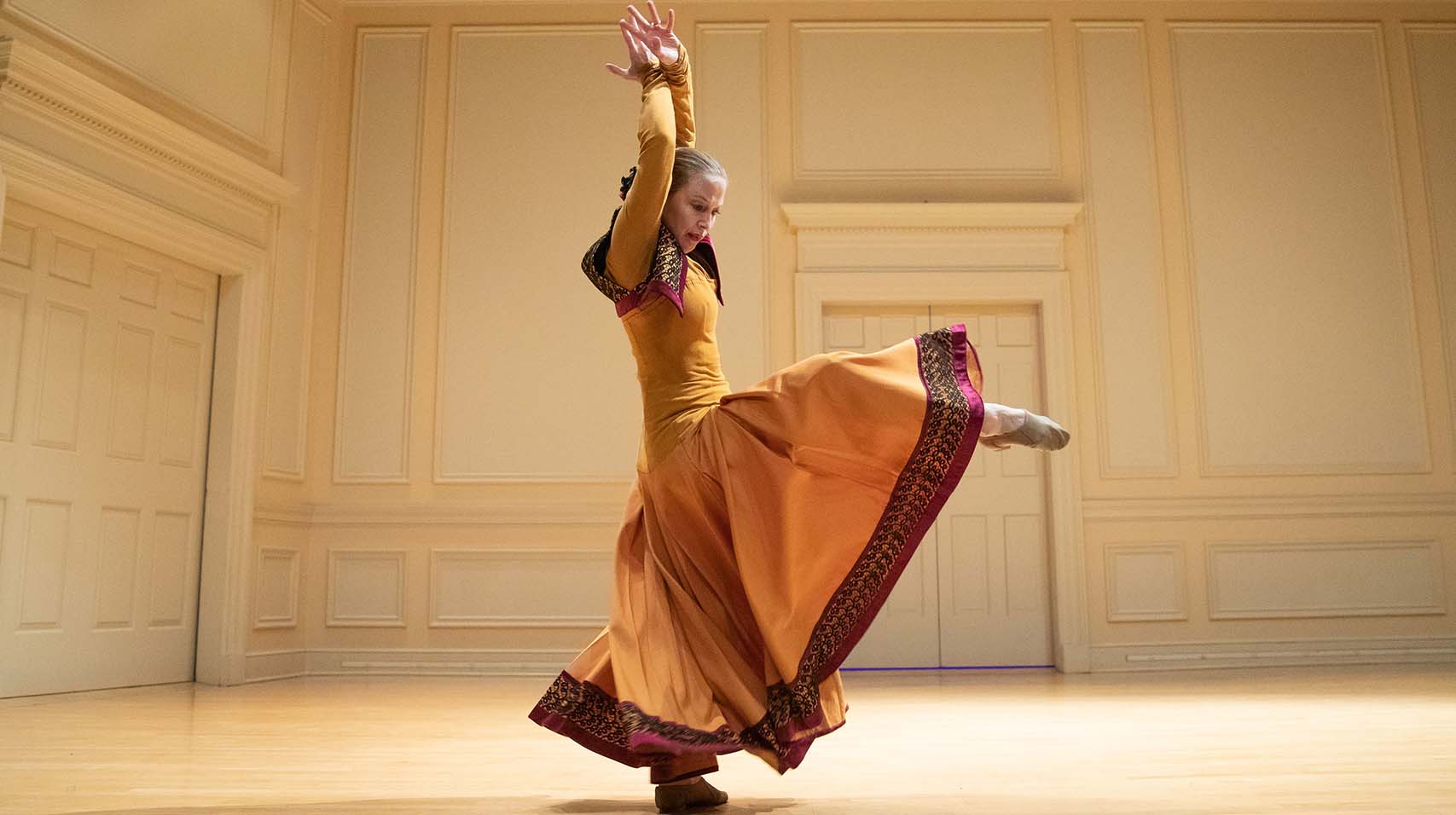 Kaufmann hasn’t tabled her own scholarship, either. She’s long been interested in the historical preservation of dance solos, which can be passed down directly from older dancers, body to body. Kaufmann learns the steps so she can serve as “a vessel” for routines that might otherwise be lost permanently. One’s body is the archive.

Three years ago, Kaufmann co-hosted a conference at Loyola called “Framing Justice: Modernism and Social Advocacy in American Visual Arts and Dance, 1929-1945.” For it, she curated a series of solos choreographed by the New Dance Group (NDG), a pioneering and egalitarian dance collective based in Manhattan. NDG coined the phrase “dance is a weapon;” top-flight instructors performed suites with explicitly left-wing themes and, back at their school, offered cheap classes accessible to aspiring dancers of all races and incomes.

The conference was filmed, and Kaufmann was pleased with the result—it was rare to see works from that era performed together and to such high standards. Emboldened, she reached out to the Library of Congress, wondering if they might like a recording of the presentation. They did her one better, suggesting Kaufmann present the program a second time, at the Coolidge Auditorium in Washington, D.C. This past April, Kaufmann and her colleagues stepped on stage before hundreds of scholars at the Popular Culture Association’s annual conference and brought to life gestural dance sequences with legitimate historical significance.

In Kaufmann’s piece, Cante Flamenco (1944), she portrayed a feminist leader known as La Passionara, a revolutionary antagonist of the Spanish dictator Francisco Franco. It was originally created by Jane Dudley, a choreographer and prominent dancer in Martha Graham’s company—Kaufmann’s old stomping grounds. The symbolic appeal of slipping on an elegant brown costume was obvious.

Though she dances far less often than she used to, claiming with a wry smile that “everything hurts,” Kaufmann had no intention of sitting this one out. “I’d have to be needing surgery not to perform this one.”