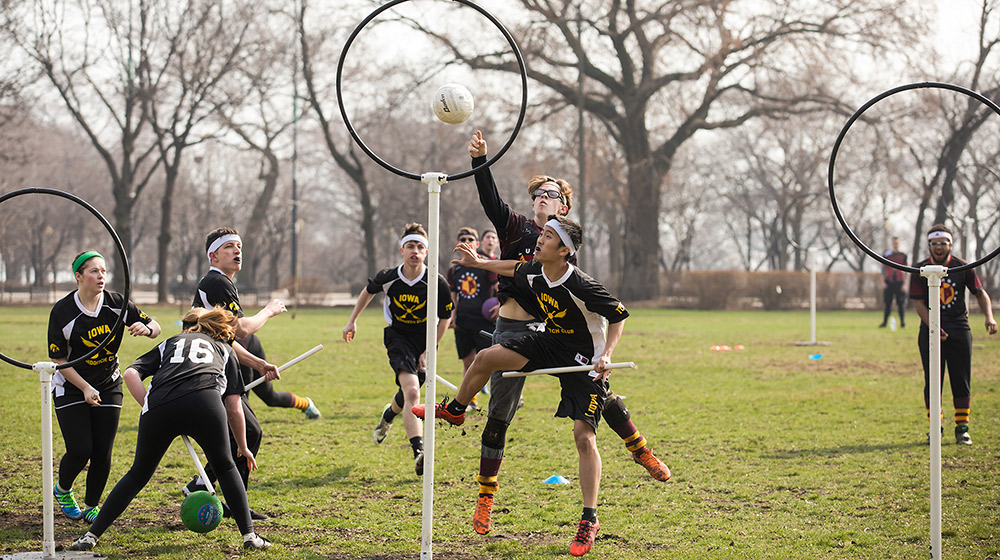 On a serene fall night in September, the sun sinking low behind Gentile Arena, senior Jessica Anger hauls a huge plastic bin onto the turf at nearby Sean Earl Field. The bin contains an odd assortment of equipment: six unwieldy hoops; mesh sacks of volleyballs and dodgeballs; and a nylon hockey bag filled with PVC pipes, all about three feet long. Two dozen students have assembled nearby, taping their ankles and swigging water. One dons an arm sleeve, à la Steph Curry. Another adjusts a knee brace and searches for his mouthguard. They look like athletes, of a kind. What they’re preparing to play is in no way self-evident.

And so Loyola University Chicago’s very own quidditch team grabs their pipes and takes off running. There are high knees and butt kicks, smiles and belly laughs; the group has a performative earnestness more common in theater troupes. Balls fly back and forth with pace. A not-insignificant number of people walking by pause to stare, slightly baffled. Some even take out their phones to shoot videos. When you stumble across quidditch, in the flesh and not on the page, how else should you respond?

There are common misconceptions about quidditch, the sport devised by J.K. Rowling for Harry Potter and the Sorcerer’s Stone and later adapted for non-wizards in 2005, at a Hogwartsian liberal arts college in Vermont named Middlebury. The first involves magic, or the relative lack thereof. “How do you fly? That’s usually people’s first question,” says sophomore Alli Hardin. (Nobody does, sadly.) Passersby also assume that participants are simply fantasy geeks cosplaying as their favorite Potter characters. Thus the craning necks and confusion. “A lot of people think we just come out here and pick up a couple of brooms and throw a couple of balls around,” says junior Murphy Cavanaugh.

That’s not the half of it. In 15 short years, quidditch has evolved into a highly-competitive contact enterprise, played in nearly 30 countries, with a U.S. governing body and a rulebook that clocks in at 185 pages. (Capes and costumes: banned.) The basics, which aren’t necessarily basic if you’re not a Rowling devotee: There are seven players to a team, with no more than four players of any single gender on the pitch at any time. Everyone must keep the broomstick-like pipe between their legs. Three are chasers, who try to hurl a semi-deflated volleyball through hoops on their opponent’s half of the field (60 yards long and 36 yards wide), guarded by the opposing team’s keeper. (A goal—scored from any angle or side—counts for 10 points.) Two additional beaters defend against the chasers by either tackling them (think rugby) or nailing them with bludgers (think dodgeball), often from point-blank range. Beaned by a bludger? You must get off your broom and tag one of your own hoops before you can make contact with another ball or player. Those who commit fouls are sent to the penalty box.

Meanwhile, a seventh teammate, the seeker, chases the snitch, who enters the match at the 17-minute mark. In the book series, the snitch zooms through the air anarchically. In the collegiate version, the snitch is an impartial player wearing yellow shorts and a tennis ball, which dangles inside of a sock Velcroed to his or her back. (Think flag football.) Snagging the tennis ball is worth 30 points, and triggers the conclusion of the match.

It’s a full-speed whimsical battle, in other words, with the attendant injury risks. “People have gotten concussions,” says Anger. “They can tear ACLs.”

“When you get beat by a really good beater,” adds Hardin, “that’s pretty painful.”

In some ways, quidditch feels like a spiritual cousin to ultimate frisbee—while it looks moderately goofy and attracts atypical athletes, playing it well requires intense concentration, agility, and endurance. “You have to know your role,” says Cavanaugh, “but then you have to make sure you’re not getting in the way of someone else doing their role.” 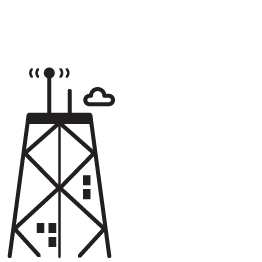 More on the team: From Grant Park to Sean Earl Field, check out photos of Loyola's quidditch team in action. 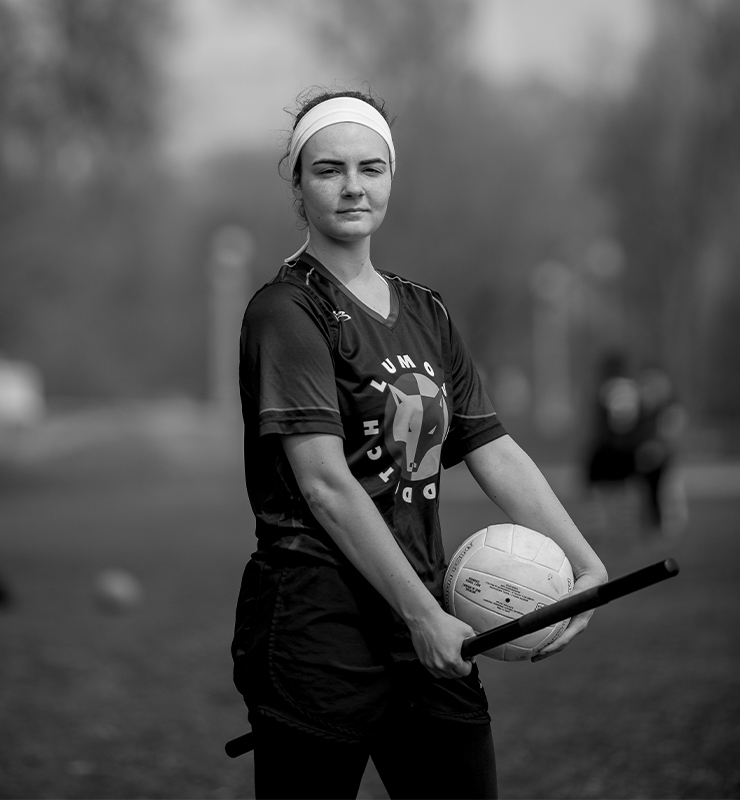 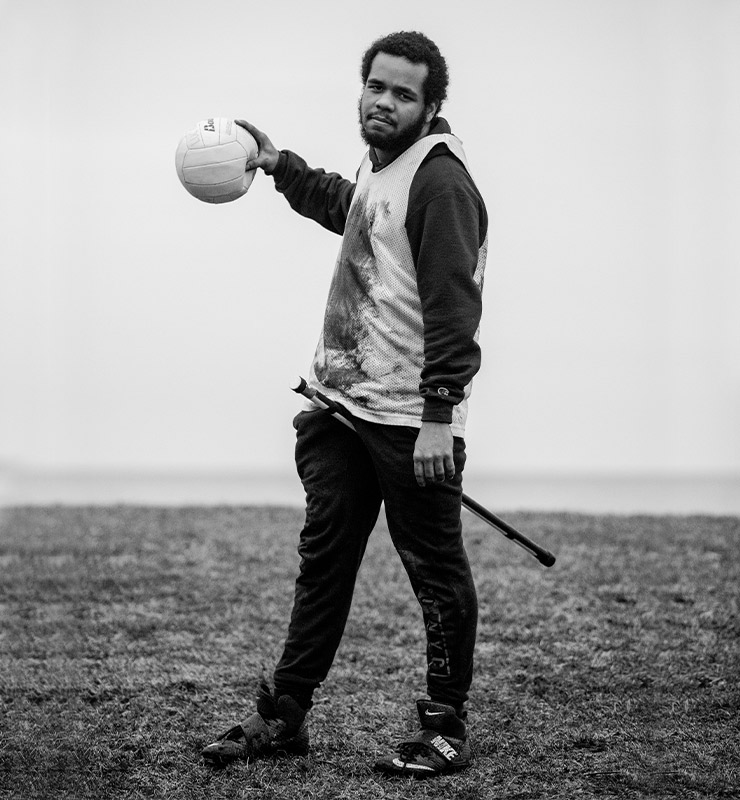 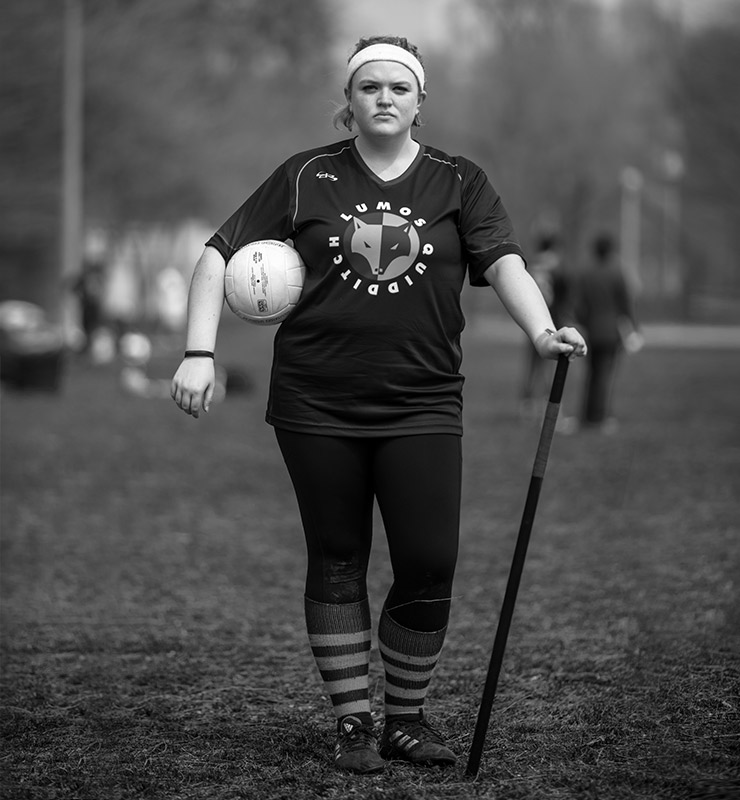 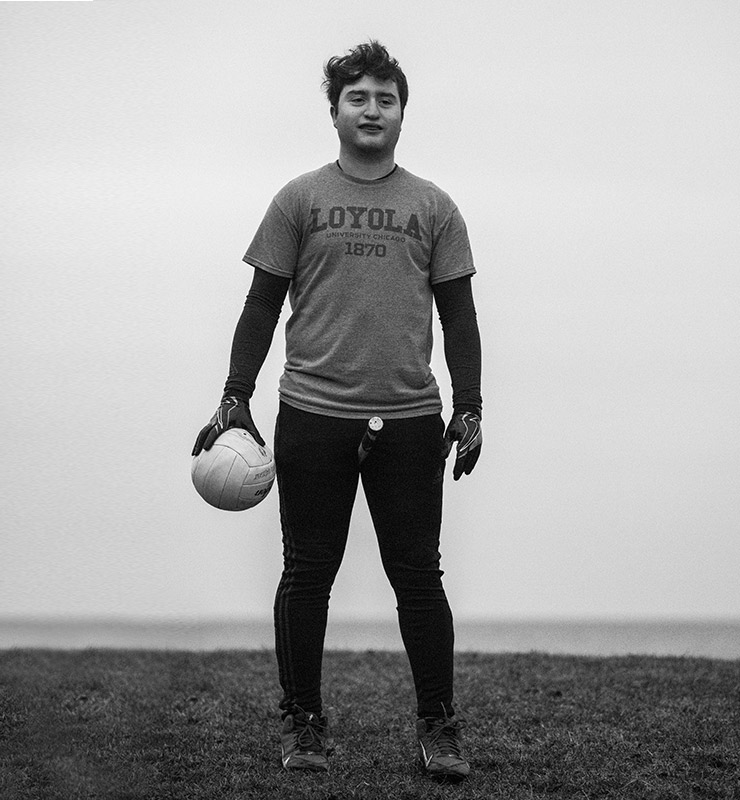 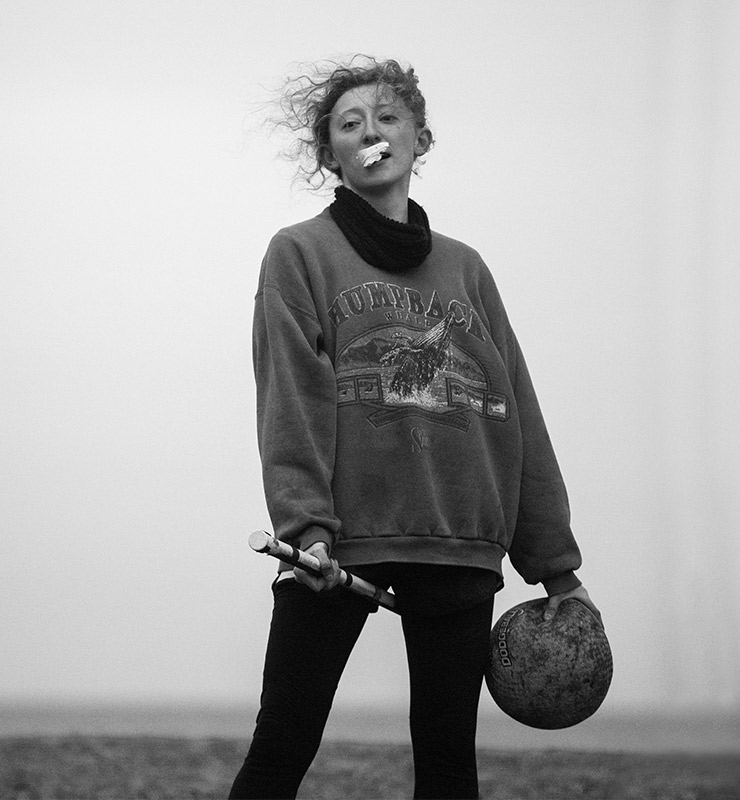 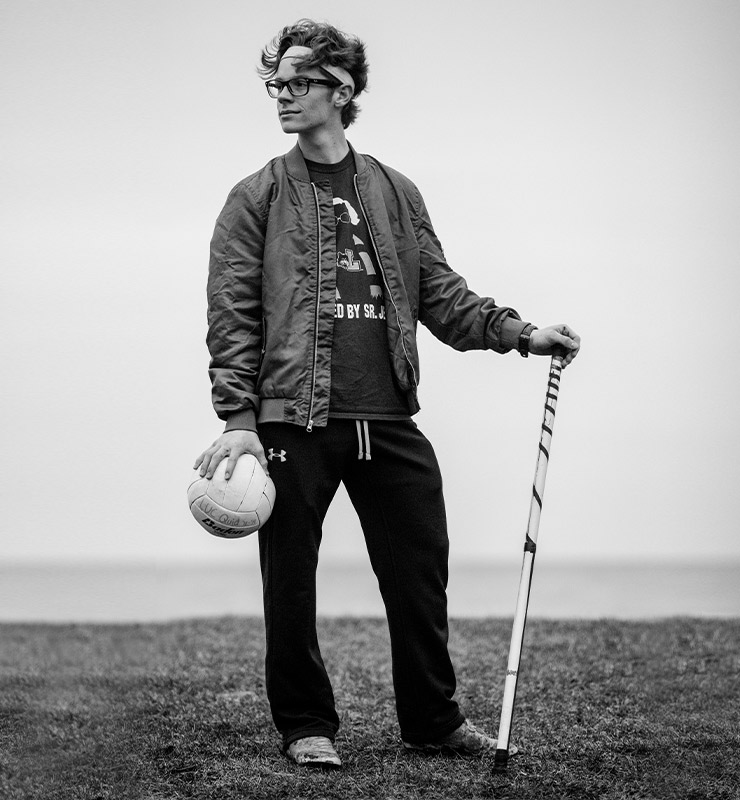 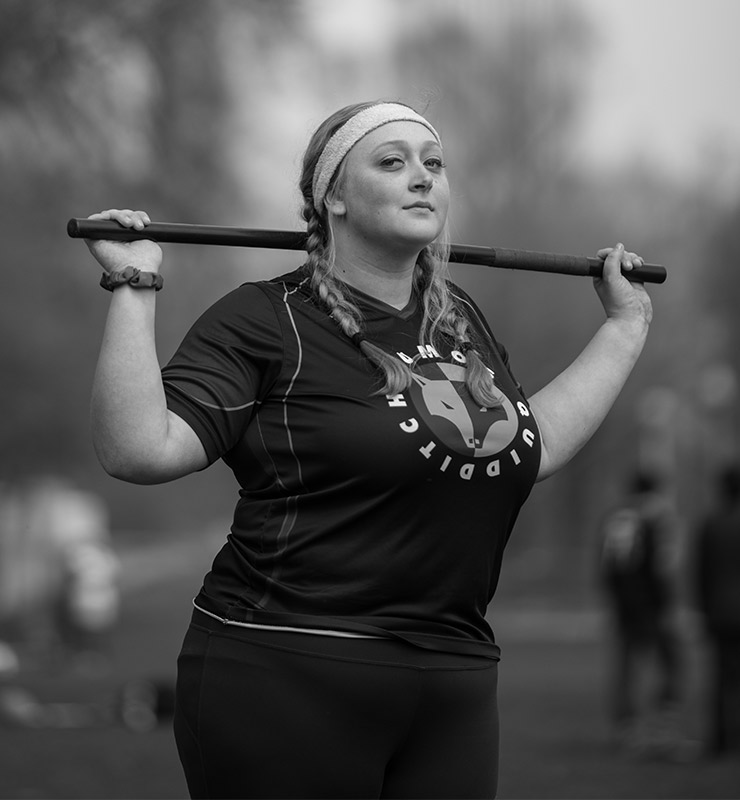 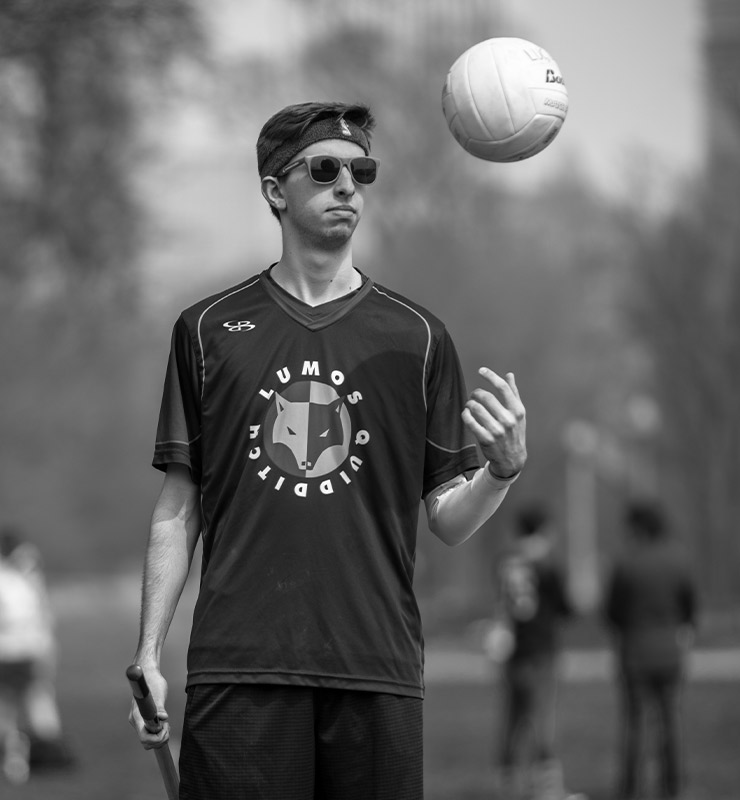 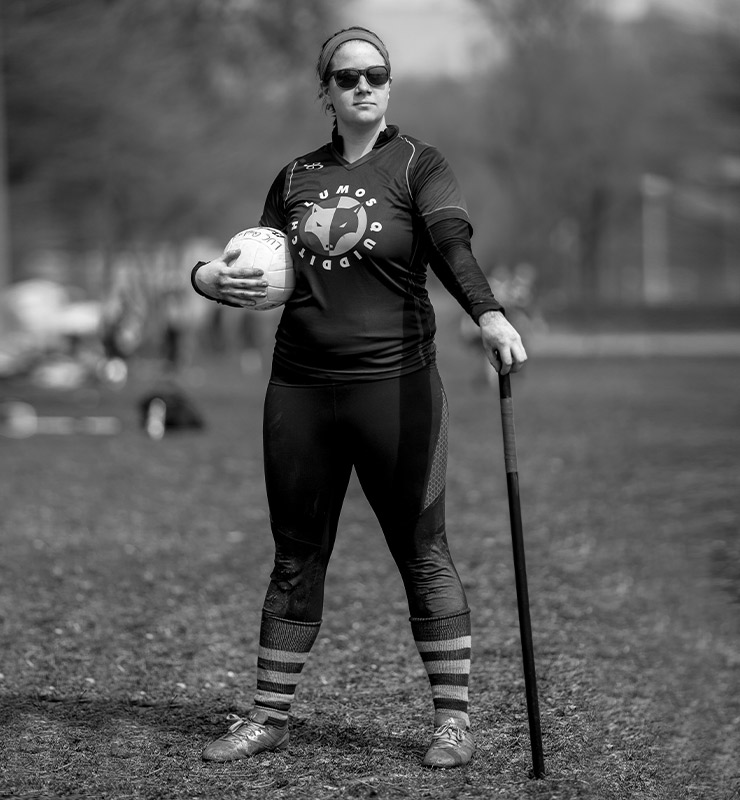 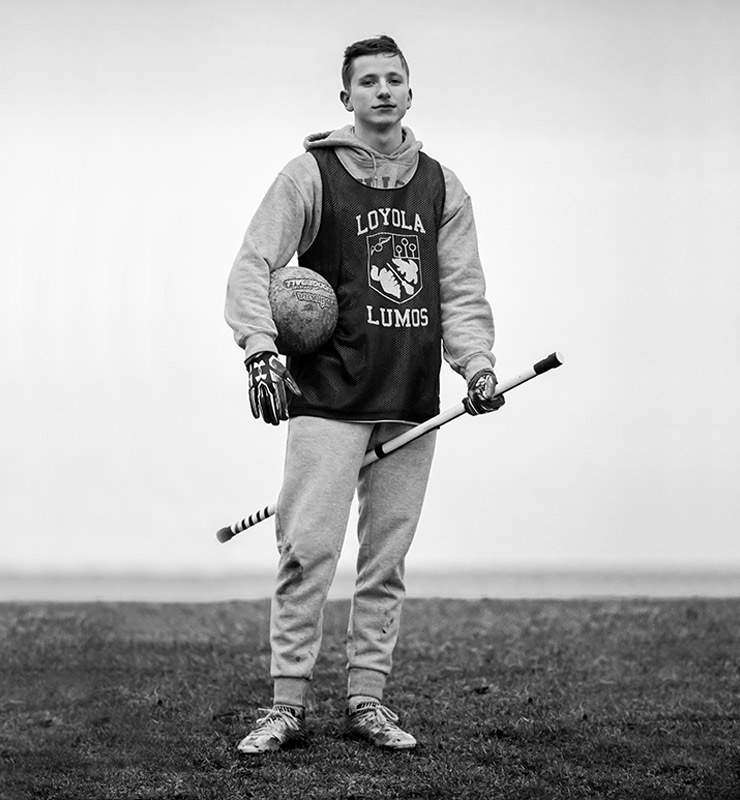 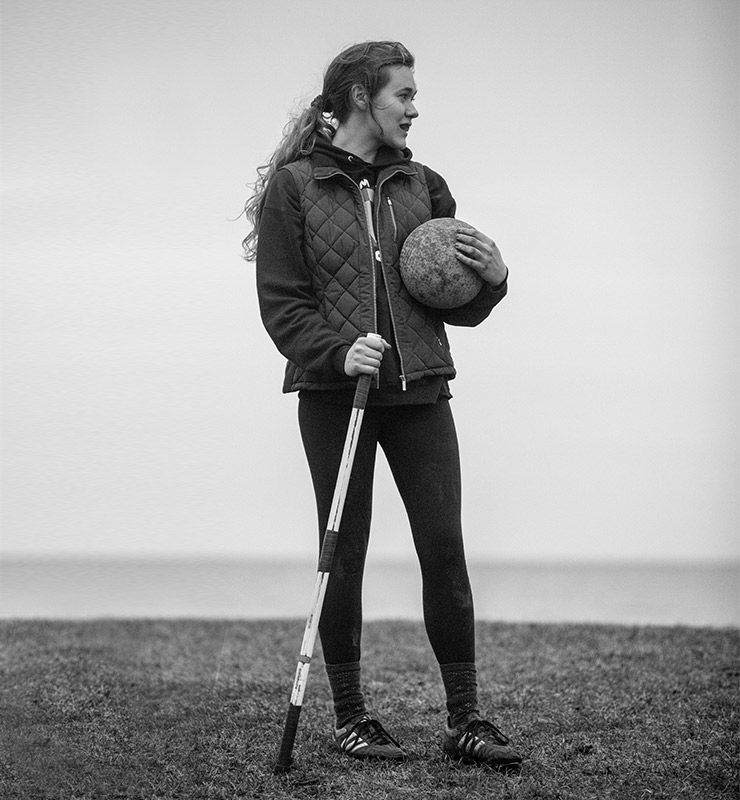 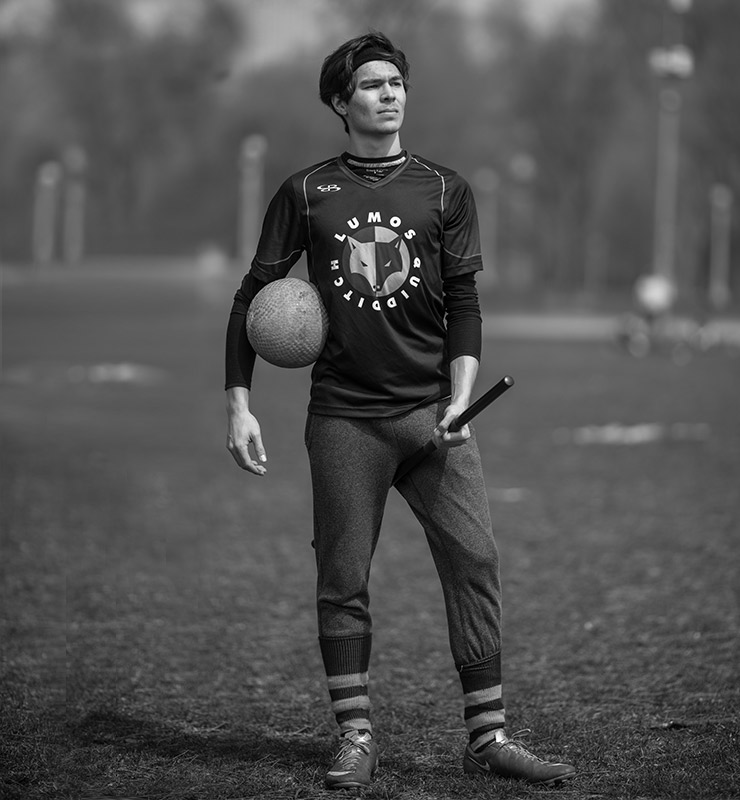 “Lord of the Rings Fan”

Loyola’s team name is LUMOS, an allusion to the Potterverse. (The incantation lights up dark places when a wand is flicked.) Founded in 2010, the club routinely rosters 50 players, fielding both an intercollegiate and an intramural squad. Loyolans come to quidditch randomly, often with little understanding of its rules and morays. Some are Potter diehards. Others couldn’t care less about Harry and Hermione, but have played competitive sports their whole lives. Three years ago, Anger was en route to the club basketball table at the student org fair when she saw some stacked brooms; quidditch, she figured, could give her something active to do in the offseason. Lauren Zenisek, a freshman, happened upon LUMOS during Welcome Week. “I was walking around, trying to find anything that sounded remotely interesting,” she says. “I’ve read the first book and like 20 pages of the second. I’m not a huge whiz on it all!”

LUMOS has developed a reputation among its rivals—that of The Happiest Team in Quidditch. With aggressive sportsmanship and unbending positivity, it’s a moniker they willingly embrace. Anger knows they’re not world-beaters; for a four-year stretch in the middle of the decade, LUMOS didn’t win a single match, and they finished last season with a 4-9 record. She doesn’t think the occasional loss diminishes from quidditch’s inclusive appeal: “You get to run around, have fun, and play a funky sport with a broom between your legs.”

The club extends its reach beyond the pitch, too, with volunteer events at libraries and parks, movie nights, team dinners, and an active group chat. Nobody is cut or banished to Slytherin; everyone is welcome. Their fall schedule is already rolling, including a trip to Ball State University for the Ball Brothers Brawl on October 12. “It’s one of the greatest experiences that I’ve had at Loyola. It’s the thing that I will never regret doing,” says Cavanaugh. “My whole foundation has come from this team.”

Practices, though, are not for the faint of heart. LUMOS meets for two hours at a time, multiple nights per week. Anger stalks the pitch, whistle around her neck, consulting a black notebook for drills and plays. She hopes to see quidditch in the Olympics someday, and she treats her own volunteer duties with requisite seriousness.

Like in training camp, chasers sprint along the turf, decking defenders and perfecting their shooting form. Beaters hone their drilling accuracy, chucking dodgeballs at the skinny base of their goals. To perform all of these tasks while straddling an ersatz broom adds a legitimate layer of logistical complication. The team is easy with the encouragement, even if the action ultimately breaks down. (One novice, while jogging back into line: “I’m so confused all the time!”)

Quidditch rewards bravery, too. In one sequence, LUMOS chasers start zagging through a gauntlet of beaters, en route to the hoop. Bludgers rain down. One beater rears back and hurls her dodgeball directly into the face of an incoming chaser, the smack echoing across Sean Earl.

“I’m sorry!” the beater screams while scrambling to retrieve her weapon. “I love you!” 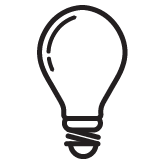 Loyola’s Student Activities and Greek Affairs (SAGA) provides students with the opportunity to explore new fields and new passions while on campus. The Campus Recreation Department, meanwhile, supports 26 sport clubs (of which qudditch is one). Learn more about other sports, clubs, and activities you can take part in.