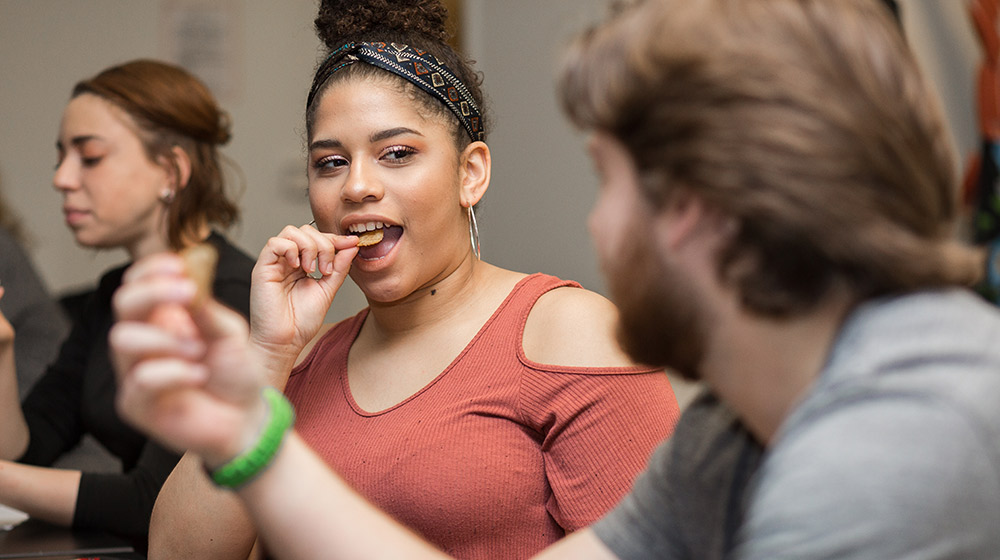 Senior Mary Murphy tastes a "Chirp,” a seasoned chip made from insects, during her Evolution of Human Diet class. Taught by Kristin Krueger-Vinson, PhD, the course critically looks at the stigma of eating insects in Western cultures.(Photo: Lukas Keapproth)

It’s not a phrase you would hear in most classes: “Oh, I’ll take more mealworms!” From these dehydrated mealworms to cricket tortilla chips, students had many insect flavors and styles to taste in Evolution of the Human Diet, a course taught by Kristin Krueger, PhD. Around 20 students and even a biology professor tried the critter buffet in Krueger’s class.

“How do the mealworms compare to the crickets?” said Krueger, associate professor of anthropology.

Most students seem to agree that the crickets tasted better, as they had more flavor and crunch to them.

“It wasn’t too bad. It didn’t taste ‘buggy.’ That’s what surprised me,” said senior Jessica Rivera, an anthropology and biology major.

Eating insects is nothing new—humans in many areas of the world consume the tiny creatures without batting an eye. Many people rely on them as a protein resource. Research suggests that adults should consume around 50 grams of protein each day. Companies like Entomo Farms (where Krueger ordered her cuisine) offer cricket flour in addition to the whole-body bugs. According to their website, 100 grams of cricket powder contains 60 grams of protein. In comparison, 113 grams of steak has 32 grams of protein.

Krueger said the idea of getting “grossed out” over eating insects is mainly a stigma enforced by Western societies.

“Insects weren’t just a fallback food for our human ancestors—they were seen as a primary source for protein. They’ve been important in our evolutionary path.”

“I wanted my class to explore what happened and why western societies now reject the idea and see these bugs as gross or bothersome,” she said.

The class discussed how the agricultural boom and colonialism can be blamed for aversion to eating insects. Some students discussed whether that mindset could be changed; and if so, how it would be more sustainable than cattle or pig farming. Krueger said adding bugs to the menu has helped students engage more in the class and around the topic.

“Having insects for them to try was a natural addition to the conversation. We’ve been talking about food and diet as an intersection of biology and culture, so we have to confront the ideas as best as we can, and what better way than to try a bug buffet.”