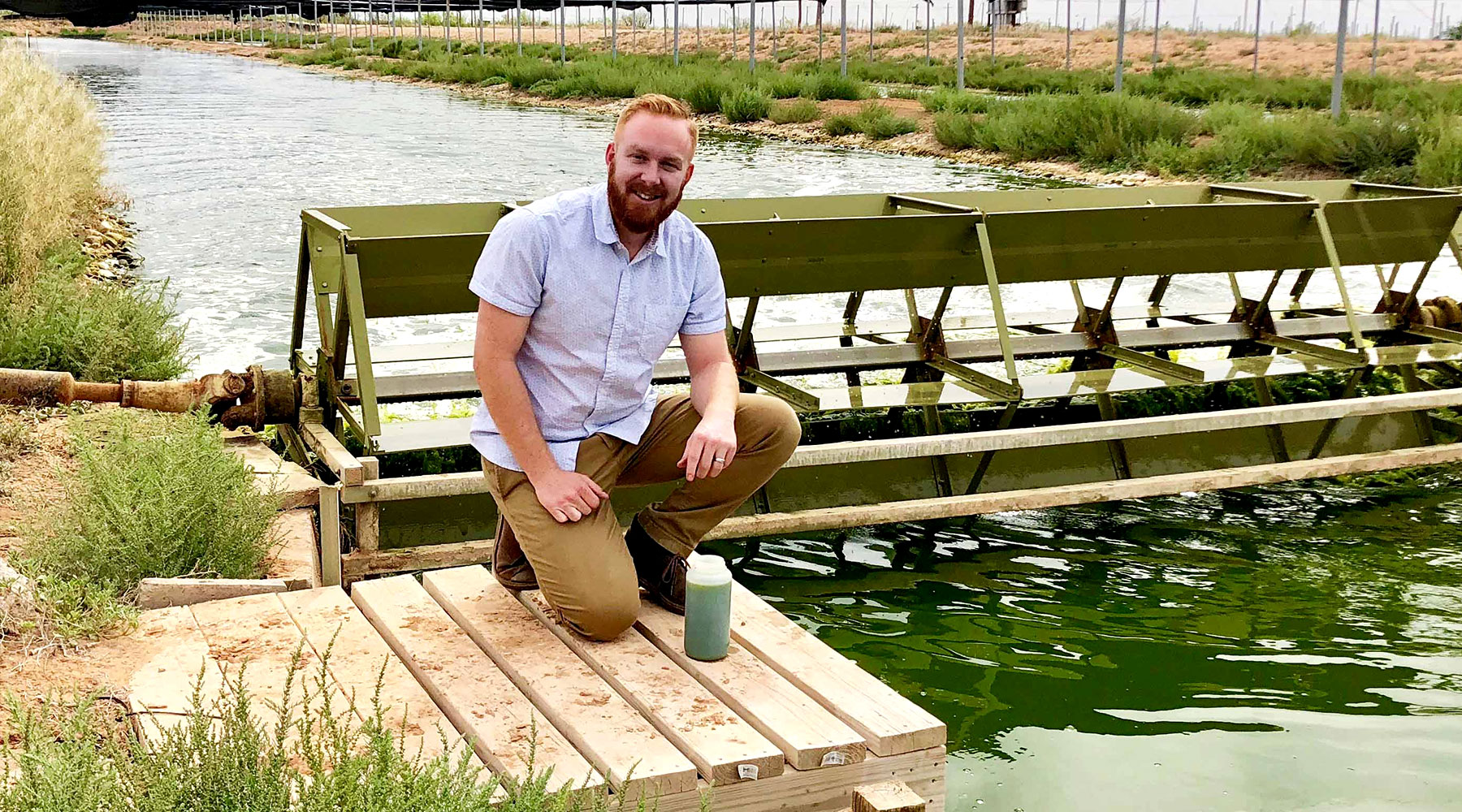 Unlocking the power of algae

When Jake O. Nalley, PhD (BS ’11) peers through his microscope at algae, he sees green in more ways than one—he glimpses the potential of the mossy-colored aquatic plant to help preserve the planet’s resources and tap into new markets. “Algae are absolutely incredible,” he said. “They produce over 50 percent of the oxygen that we breathe—algae really are the lungs of the earth—and they’re a core piece of the food web. Algae are amazing and are pretty powerful in what they can do for society.”

Researchers continue to discover new uses for this mighty little plant: from its potential as a protein-rich, more sustainable food source for humans and animals, to its benefits as an organic fertilizer, to its yet-to-be-tapped power as a biofuel.

Nalley is on the forefront of the growing algae industry. After majoring in Biological Sciences and Environmental Sciences at Loyola, he went on to Michigan State University for a dual PhD in Integrative Biology and Ecology, Evolutionary Biology, and Behavior. Now he’s the agronomist and production coordinator at Qualitas Health, a Texas-based biotech start-up that specializes in algae-based nutritional products, and he also sits on the board of the Algae Foundation.

A native of Bloomington, Illinois, Nalley first came to Loyola to study forensic science, but soon courses such as The Human Ecological Footprint turned his interest in a different direction. “I was always a nature enthusiast, and I was passionate about applying science to do something meaningful,” he explained. “Human Ecological Footprint was pretty eye-opening and helped me understand how humans can impact the environment positively and negatively. It wasn’t all doom and gloom, and it helped me realize there are things worth going after, like conservation, stewardship and environmental education, and one of the things that I latched onto was alternative fuels.”

He ended up at a lab at Michigan State that had a grant to study algae as a biofuel. “And I was hooked from there,” he said.

During graduate school, Nalley discovered his love for algae could connect with another personal passion: brewing beer. The average gallon of beer yields seven gallons of wastewater, which is highly unsustainable and very expensive to treat. At the same time, Nalley realized that brewery wastewater is loaded with the same chemicals that algae need to grow. “Algae have emerged as a really cool, sustainable way to clean water from industrial systems,” said Nalley, who helped a Michigan brewery develop an algae-based wastewater treatment system.

Fuel of the future?

Nalley is especially excited about the potential of algae as a biofuel. A renewable, potentially carbon-neutral fuel source, algae can make 60 times more fuel than land-based plants, according to the U.S. Department of Energy. “You basically crack open the cells and the oil seeps right out, and it’s almost perfectly ready to be used as diesel fuel,” Nalley explained. In fact, oil-rich regions such as Texas developed in part thanks to the algae of ancient oceans.

While scientists have studied algae as a biofuel since the 1970s, it’s not yet economically viable because of the relatively low cost of crude oil. Algae growers are also still refining the most efficient way to cultivate mass quantities of oil-rich algae. In the meantime, the algae industry is focusing on other products, such as the nutritional supplements created by Nalley’s employer. “We’re paving the way for the foundational knowledge so that when biofuels become economically viable, we’ll know how to grow them and how to grow them on a large scale,” he said.

At Qualitas, Nalley oversees the company’s lab and research and development initiatives. “I’m proud that I’m able to pursue something I’m so passionate about,” he said. “The work I’m doing is actually having a measurable impact on people, on society, on the environment, and that has been so meaningful.”

He appreciates the wide-angle view he got at Loyola. “I wasn’t just trained as a biologist, but I know about biology, and I know how it can be taught in different ways to impact different people, and how to talk about science, and I just have a much more open-eyed, open-minded perspective because of Loyola,” he said.