Art with Impact On our campus

Visitors to any of Loyola University Chicago’s campuses are greeted by a variety of different types of art: statues, sculptures, paintings, and other works are woven throughout the University’s grounds. Students, faculty, and staff pass them on a daily basis, but many may not know what these works of art represent or how they came to be a part of Loyola.

Like all pieces of art, each one has a unique story. Some were created for Loyola to represent a part of the University’s history or mission. Others came to campus after being part of art collections around the world. Some have a deeper meaning that may not be evident upon first glance.

Here are some fun facts about 10 recognizable pieces of art around Loyola:

From the artist’s hands: See how sculptor Jyl Bonaguro brings her vision to life with a hammer and a chisel.

1. This replica of a Chinese armillary honors the work of a 16th-century Jesuit

Italian-born Jesuit Matteo Ricci, S.J., arrived in China as a missionary in 1583. He was a skilled mathematician and astronomer, and during his stay Ricci attempted to bridge the gap between Eastern and Western cultures, sharing with the Chinese people Western clocks, musical instruments, maps, and astronomical instruments. The above sculpture is an exact replica of one such astronomical instrument: an armillary, which depicts the celestial orbits at the time Ricci was in China. The original can be found in the Beijing Observatory, and this replica was cast in Beijing using a mold of the original. It found a home on the Lake Shore Campus in 2013. (Photo: Natalie Battaglia) 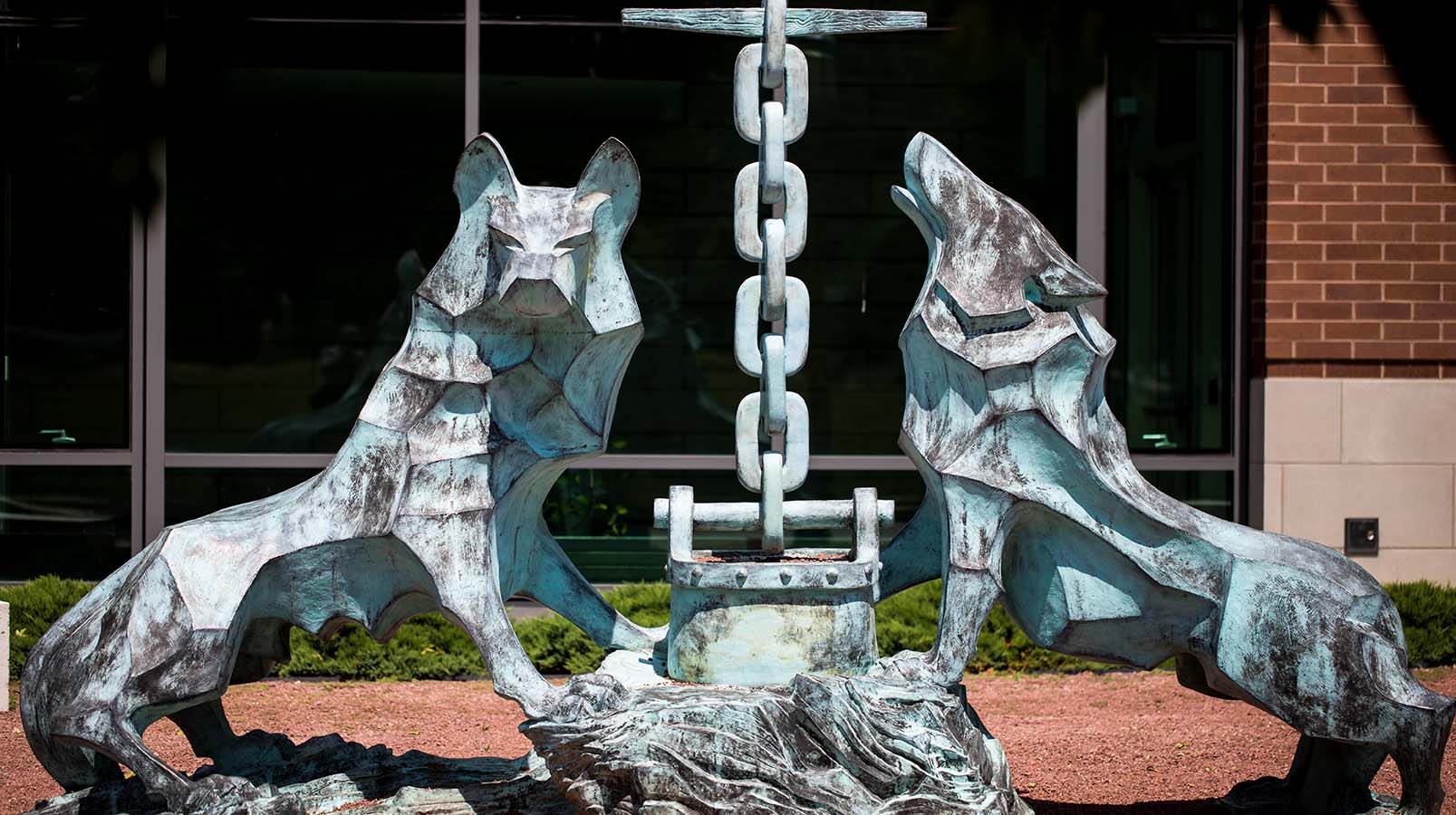 2. The wolf and kettle statue has a twin in Mexico—and in California

Most Loyolans will recognize the wolf and kettle as a part of the University shield and a symbol of Loyola’s Jesuit heritage. This statue, Los Lobos de Loyola, represents the famous story of the family of St. Ignatius of Loyola being so generous that after feeding their family and soldiers they gave the remainder of their food to the animals, including the wolves. But the statue isn’t unique to Loyola University Chicago.

The inspiration was a similar, though not identical, statue on the campus of Ibero-American University, a Jesuit school in Mexico City. That statue, appropriately titled Los Lobos de la Ibero, is the work of Mexican artist Francisco “Pancho” Cárdenas, who was commissioned by Loyola to create a similar piece. Loyola’s version arrived on campus just in time for Wolf and Kettle Day in 2012.

Another Jesuit institution, the University of San Francisco, was also inspired by the piece Cárdenas crafted for Ibero-American University; they too had one made for their campus. Their version was installed in 2011, just a few months before the one at Loyola. (Photo: Lukas Keapproth) 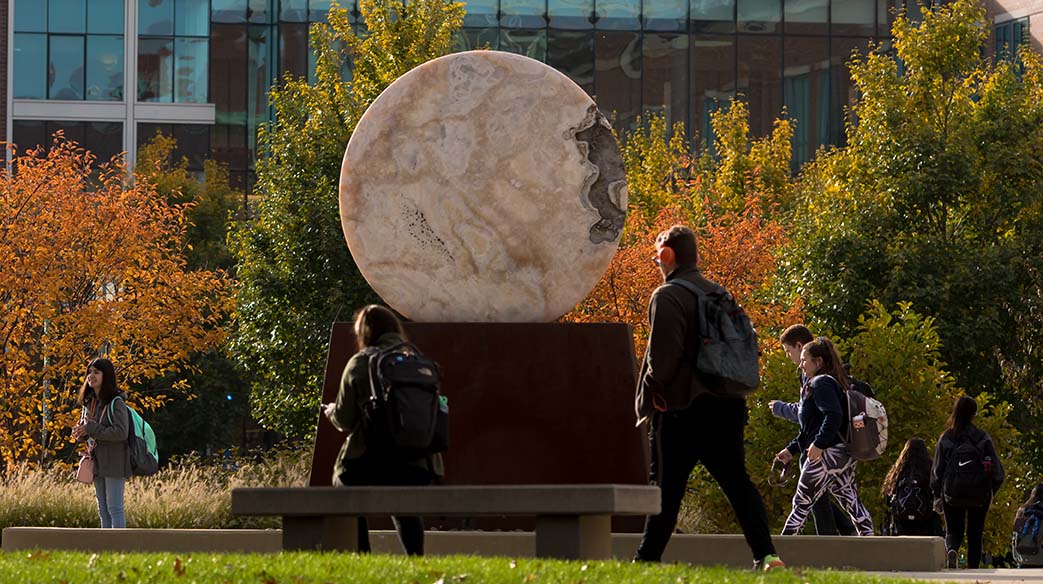 3. This moon is carved from one billion year old material

Renowned British sculptor Emily Young is known for her series of lunar and solar discs, which she says are “like angels, heavenly bodies, stars, whirling in dark space, carrying information about our origins and throwing out light to us.” Her works also take on the unique characteristics of the stones they are carved from; this piece, titled Lunar Disc I, is made of one billion year old, semi-translucent onyx. It was originally given as a gift to Salisbury Cathedral in England in 2004, but made its way to Loyola in 2010.

This piece, Young says, “is synonymous in my mind with both the oneness of the universe, of our planet and all who inhabit it, and the unutterable wonder of nature and creation. When the sun shines through it, in the early morning or in the evening, a halo of golden light appears around the edge. It is not an image of man, but an image of the provenance of man.” (Photo: Lukas Keapproth) 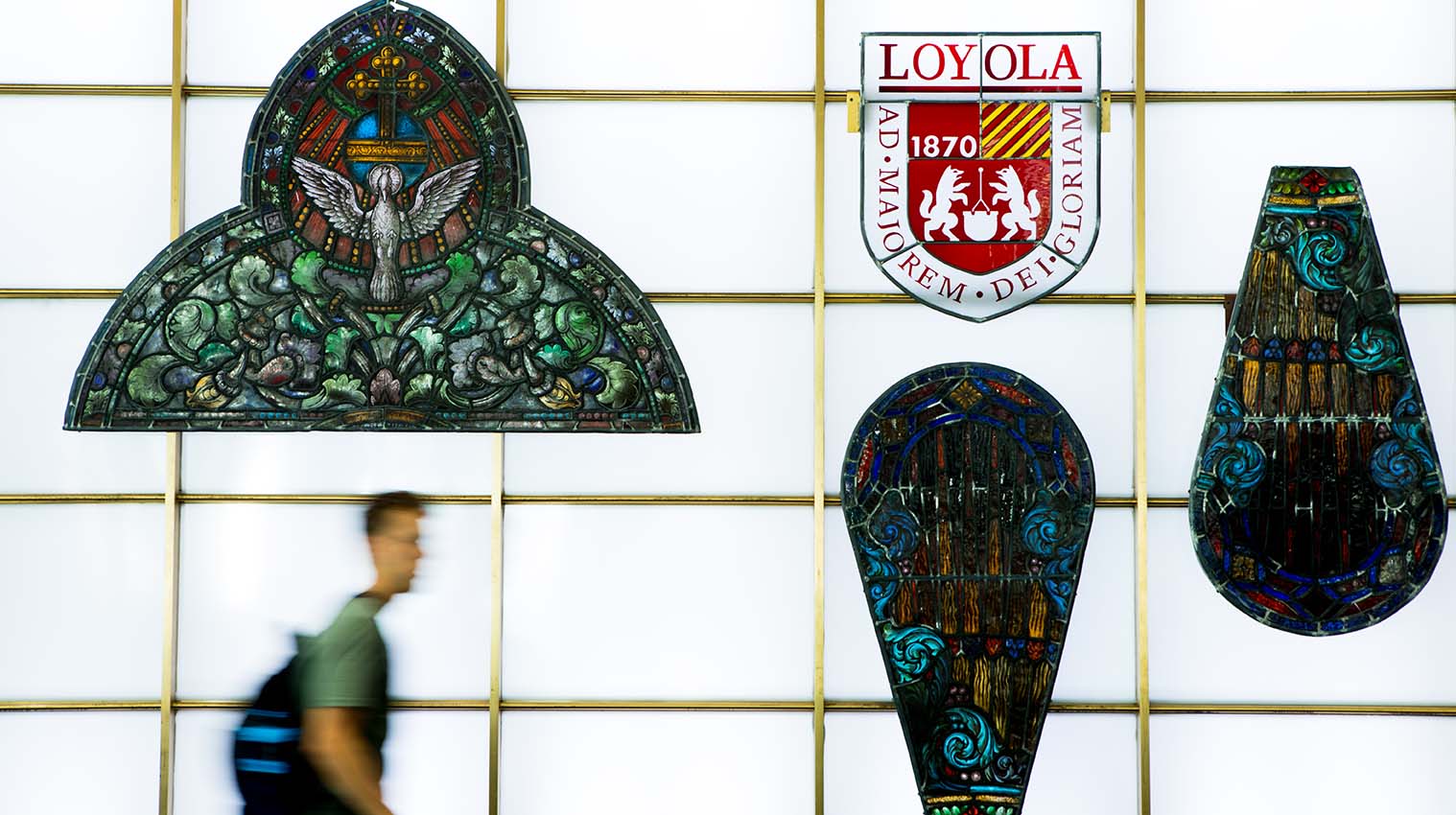 4. This stained glass was once part of the Lewis Towers chapel

Visitors to the Corboy Law Center on the Water Tower Campus walk past several large pieces of stained glass in the lobby of the building, which may seem out of place in a law school. Those pieces were more at home in their original location, the chapel that once existed in nearby Lewis Towers. When the chapel was eliminated, the stained glass was saved and put up in Corboy. (Photo: Lukas Keapproth) 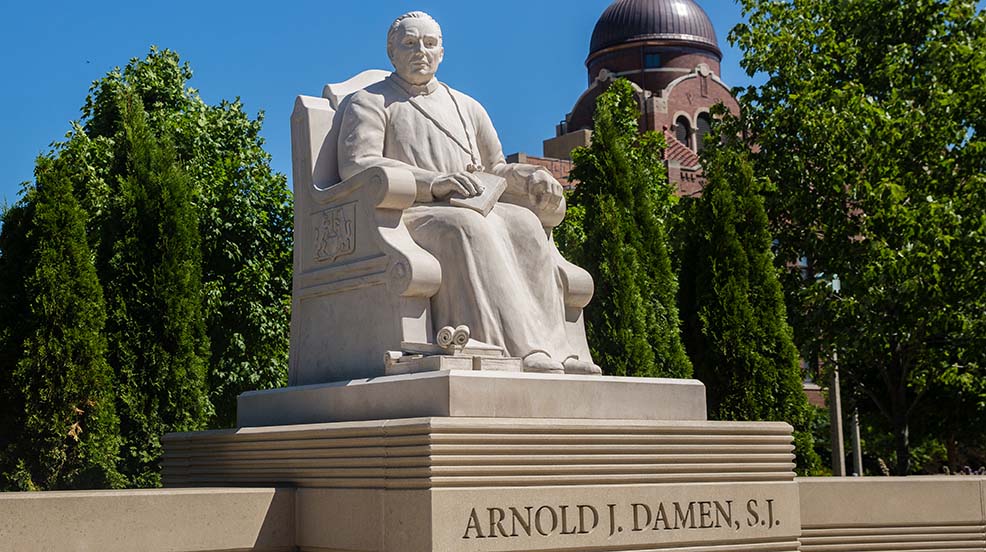 5. Father Damen was chiseled from a 10,000-pound stone block

Local artist Walter Arnold of Elgin, Illinois, created this statue of Loyola University Chicago founder Father Arnold J. Damen, S.J., from a 10,000-pound block of stone. The statue was installed on the south end of the West Quad at the Lake Shore Campus on August 13, 2015, and Arnold, the artist, added the finishing touches to Arnold, the Jesuit, once the statue was in place.

The piece honors the legacy of Father Damen, who founded St. Ignatius College, the predecessor of Loyola University Chicago. As the University’s first president, Father Damen oversaw a faculty of four priests and a student body of 37 young men. (Photo: Natalie Battaglia) 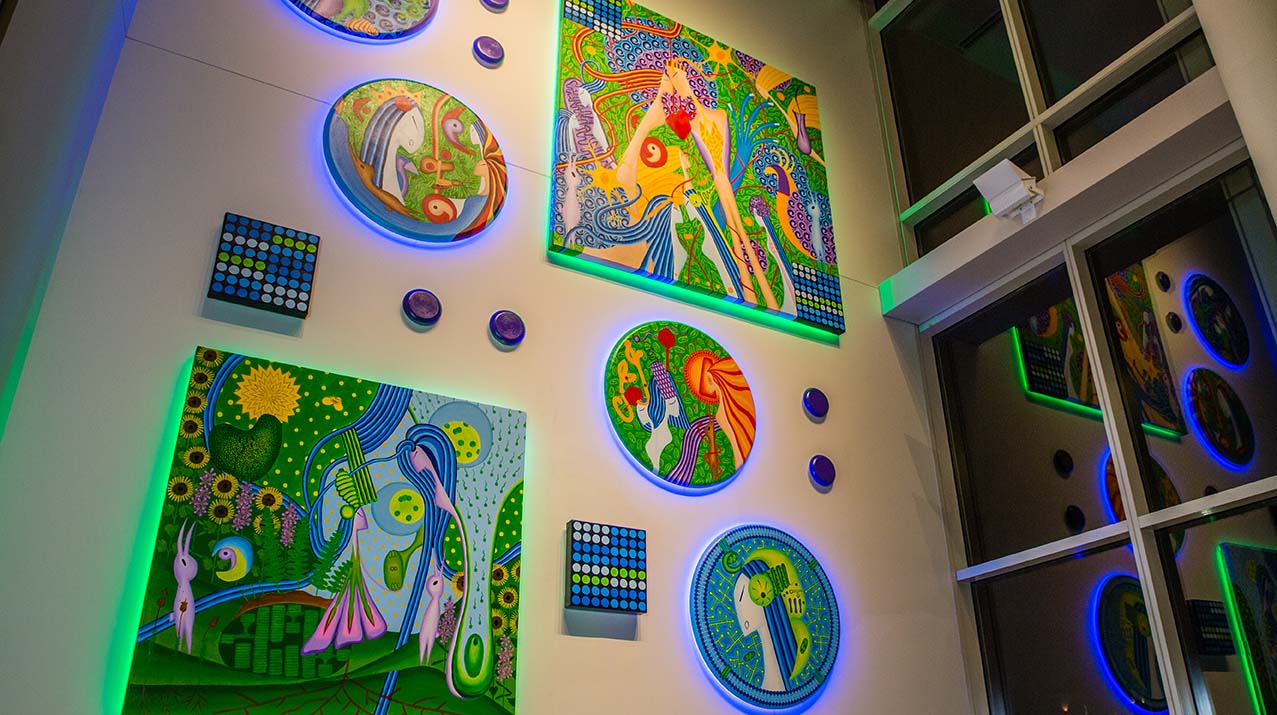 6. The artist behind these paintings is also a biologist

On the third floor of the Quinlan Life Sciences Building you’ll find Biological Domains, a collection of 14 oil paintings surrounded by custom LED lighting. The installation reflects a broad array of biological topics including animal organ systems, plant development, bacteria, and evolutionary themes, among others. And there’s a good reason why the artist chose this subject matter—she also holds a PhD in genetics.

The paintings are the work of Hunter Cole, a former lecturer in Loyola’s biology department. During her time at Loyola she even created a course called Biology through Art, where students learned to create works of art in a biology lab. Her paintings were commissioned for the installation on campus in 2016. (Photo: Natalie Battaglia) 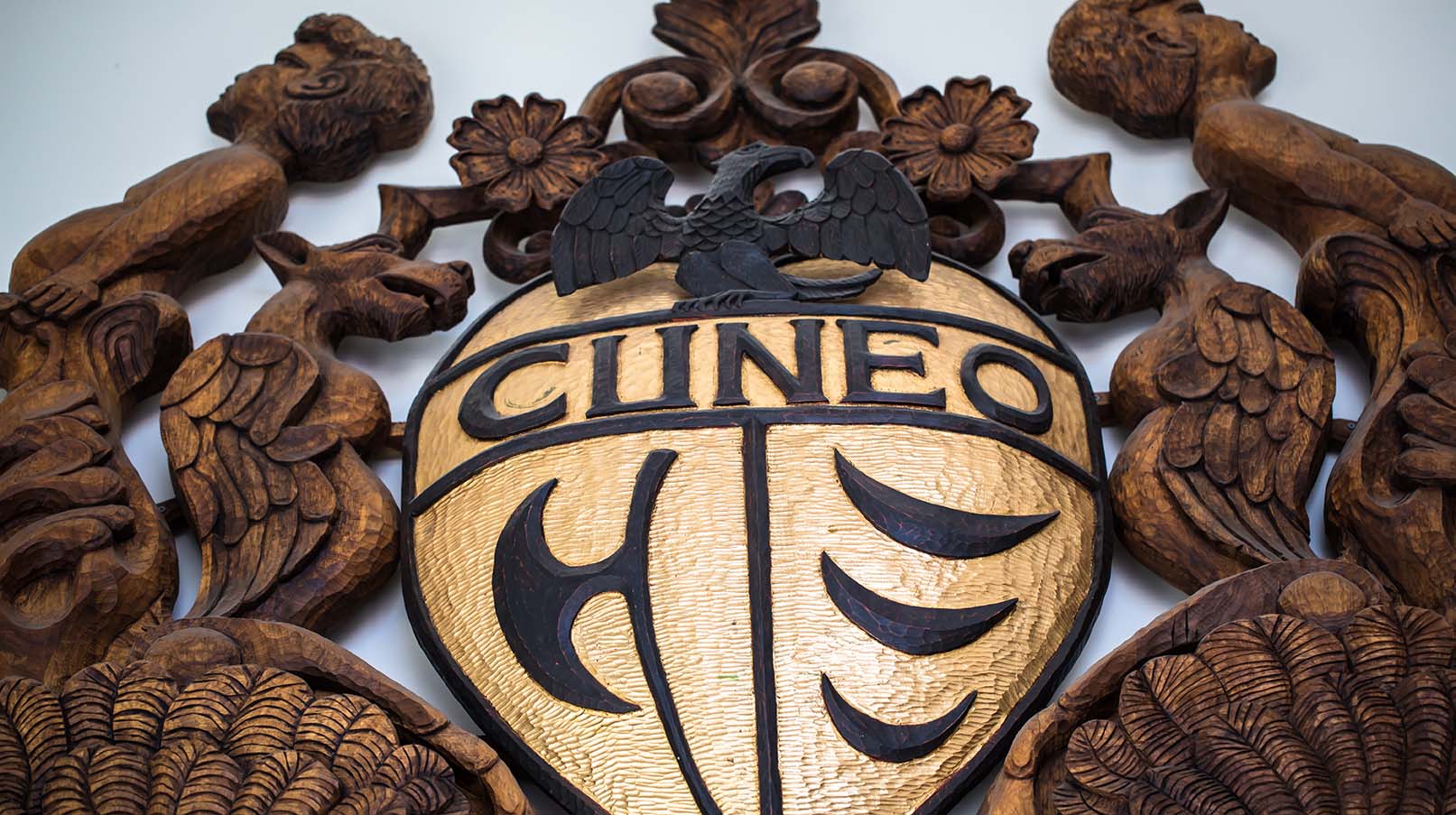 Artist Camp Bosworth of Marfa, Texas, is an expert at carving things out of wood, and he has become a trusted source for Loyola when it comes to making beautiful hand-crafted artwork. He made this wooden shield out of black walnut and gold leaf to honor the Cuneo family, who have generously supported the University over the years. The design bears the Cuneo family crest, with elaborate half-moon faces, griffins, and cherubs. And proving that everything is bigger in Texas, the piece measures 7.5 feet tall by 6.5 feet wide and weighs 350 pounds.

The crest can be found in the entrance to Cuneo Hall, where it has hung since being installed in 2012. In 2017, Loyola called on Bosworth again to make a processional cross as a gift to Chicago archbishop Cardinal Blase Cupich. (Photo: Lukas Keapproth) 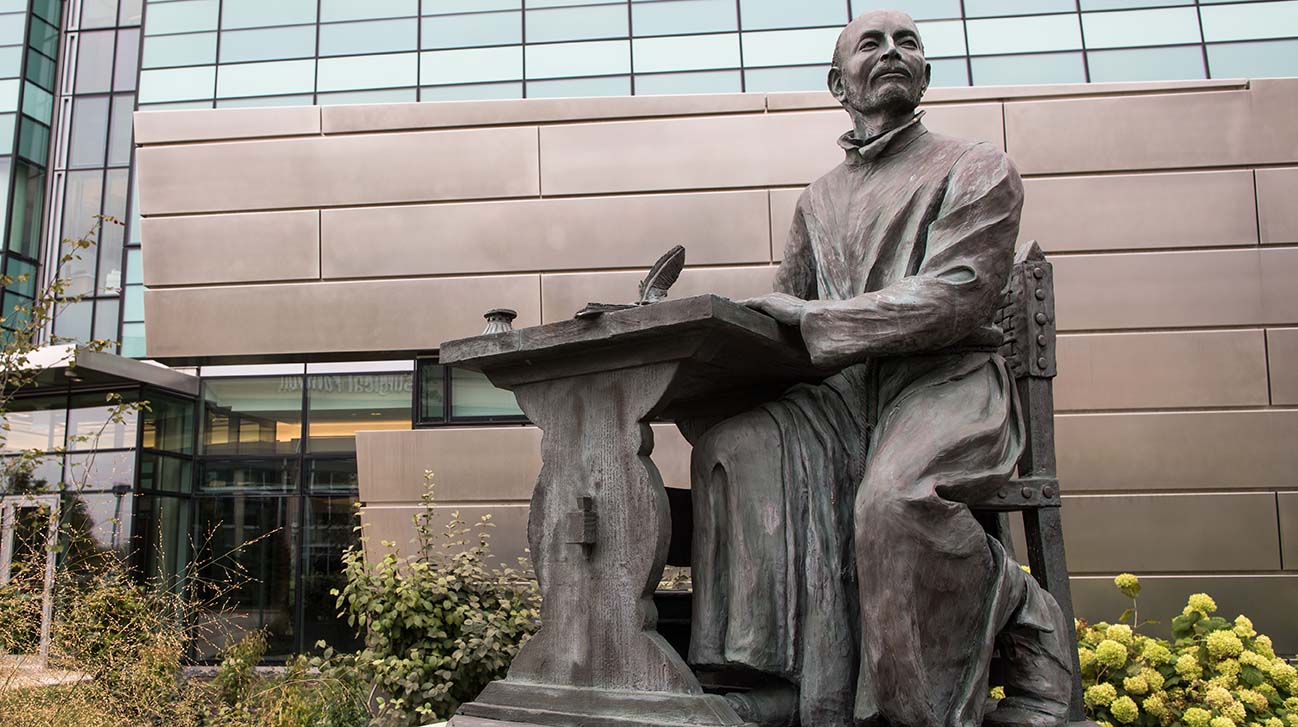 A poem by the American Jesuit priest James Hasse, S.J., once referred to St. Ignatius as “a saint at a desk” in reference to all of the writing and administrative work Ignatius did in founding and organizing the Jesuits. At Loyola, you can find Ignatius writing at his desk in two places: The above statue sits on the Health Sciences Campus in Maywood, but a similar statue of Ignatius can be found inside the Information Commons at the Lake Shore Campus. (Photo: Lukas Keapproth) 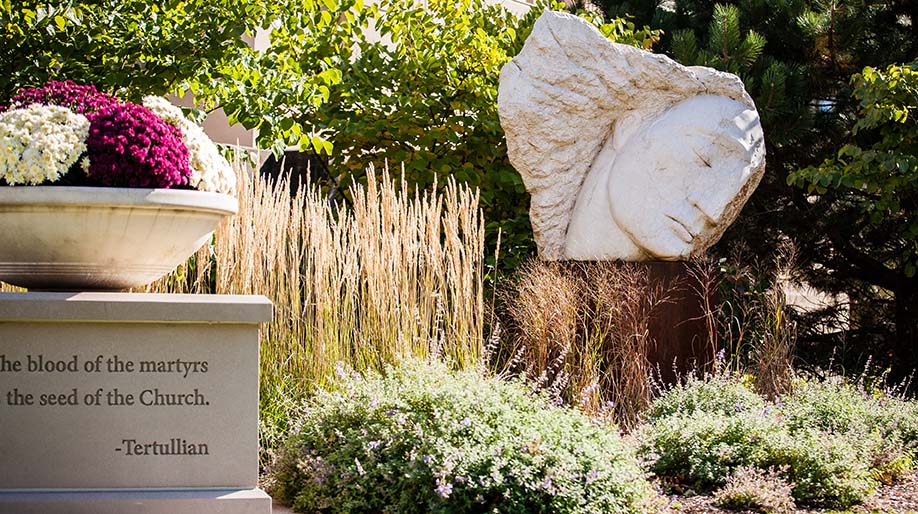 The Wounded Angel statue near Madonna della Strada Chapel has become an iconic symbol of Loyola’s mission and the University’s connection to the Jesuit martyrs of El Salvador, who are remembered on a nearby memorial. But even though the angel seems like a natural fit for Loyola, the Lake Shore Campus was not its first home.

The marble sculpture, another work by Britain’s Emily Young, was created in 2003 and purchased by an art collector who loaned it to the Royal Botanic Gardens, Kew, in London. The statue remained there until 2010, when it was purchased by Loyola and moved to its current location. (Photo: Natalie Battaglia) 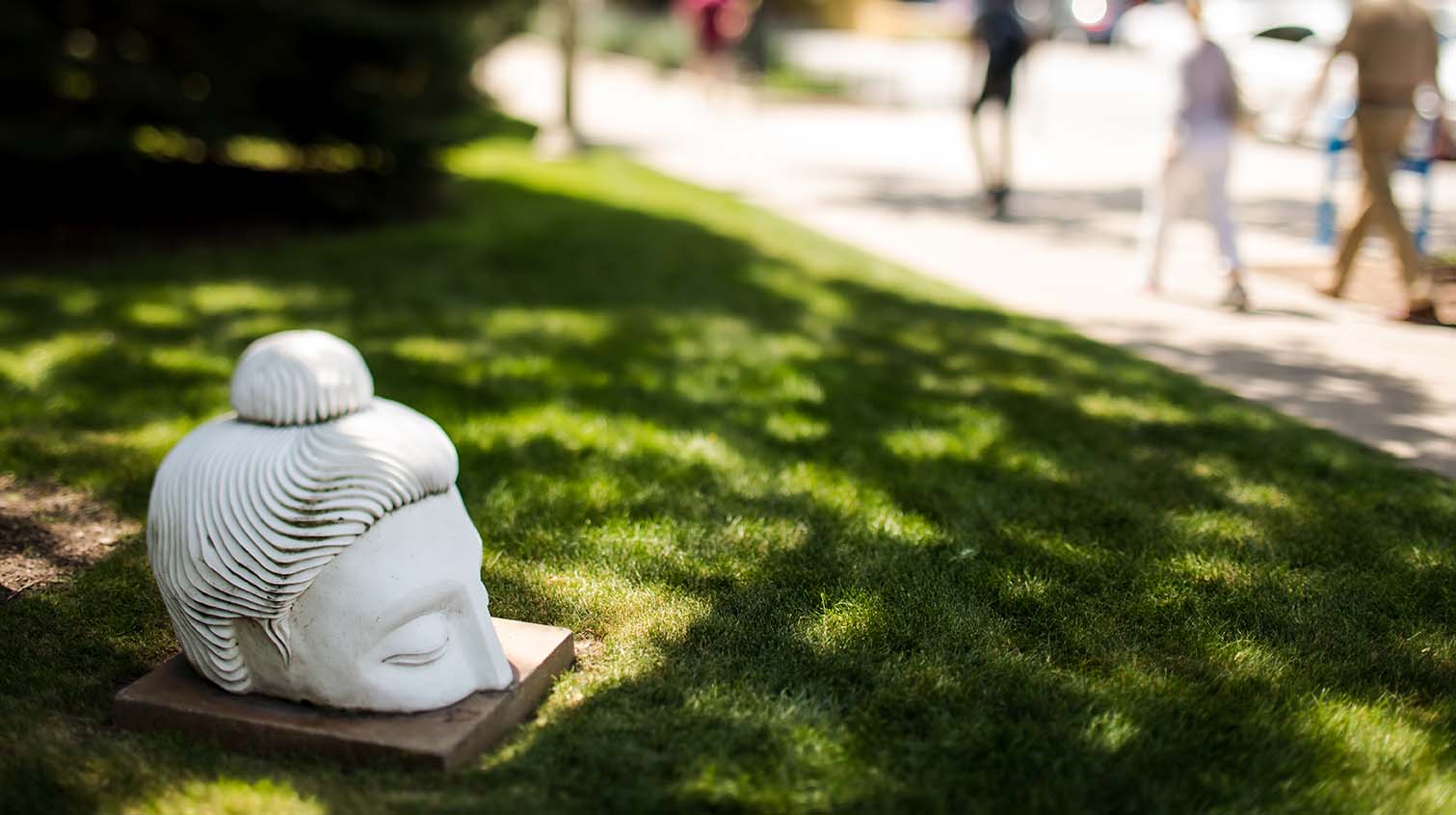 10. There are 99 more of these Buddha heads across Chicago

Passers-by on Sheridan Road may notice this Buddha head peering out just over the grass, but if you travel the city you’ll find them in many other locations. The fiberglass sculpture by Indira Freitas Johnson is part of her Ten Thousand Ripples project, which saw 100 of these sculptures installed in neighborhoods throughout Chicago, from the far South Side all the way to Rogers Park.

The Buddha heads were originally on display at the Chicago Cultural Center and were intended to provoke a sense of peace, but Johnson wondered what reaction people would have if the sculptures were installed in public spaces like storefronts, parks, and abandoned lots. That led to the creation of Ten Thousand Ripples, and Johnson began working with neighborhoods and community organizations around the city to install the sculptures in public spaces as a way to spark conversations about peace and nonviolence. Loyola’s Buddha has been looking out on Sheridan since November 2012. (Photo: Lukas Keapproth)