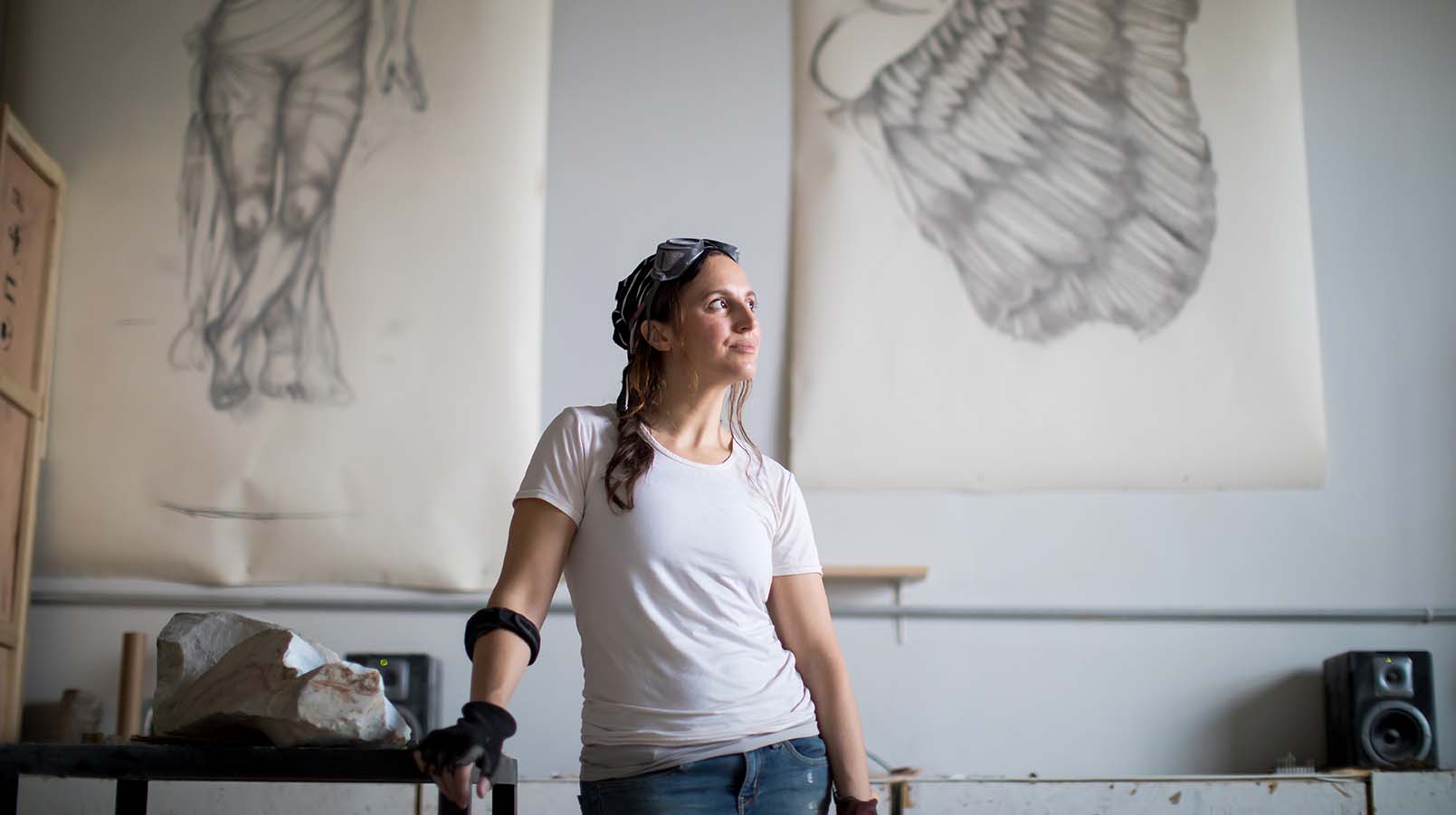 In her studio on Chicago's West Side, Jyl Bonaguro (BA '98) carves sculptures from marble by hand, a practice she taught herself. It is a process, she says, that integrates a piece of the earth with her artistic vision. (Photo: Lukas Keapproth)

In 2014, Jyl Bonaguro (BA ’98) was trying to make a living as an artist in Chicago when a friend from Georgia made her a unique offer. Knowing that Bonaguro was also a skilled web designer, her friend—a sculptor—said that if she created a website for him, he’d pay her with a thousand pounds of marble and alabaster. She accepted.

“I just started carving, slowly,” she recalls. “I would put in 12, 14 hour days. By 2015, I had sculptures ready and a gallery exhibiting and selling them.”

It was a new beginning for Bonaguro, who began studying art at age 7 and always had a fascination with stone. As a child spending summers in Michigan, she’d sit in streams, picking out shiny rocks to take home. But she never had access to formal sculpture training. Even while attending Loyola University Chicago, there were no classes specifically on the subject. Instead, she took other art classes, and earned an English degree.

After graduating, she wrote plays and moved to New Orleans, where she managed a gallery. Then, in 2005, Hurricane Katrina hit. She lost nearly everything. “I figured, if I have to start life over, I’m going to start with an emphasis on art,” she says.

Bonaguro moved back to Chicago, and built up a career in writing and art. Then came 2014, and a half-ton payment from a friend. She bought a set of steel chisels that were gathering dust in an art store, watched some instructional YouTube videos, and went to work. “When you’ve thought about something as long as I have,” she says, “when you finally sit down and do it, it just flows out.”

A view of futures past: Noritaka Minami's photography captures images of an imagined future that never became reality. 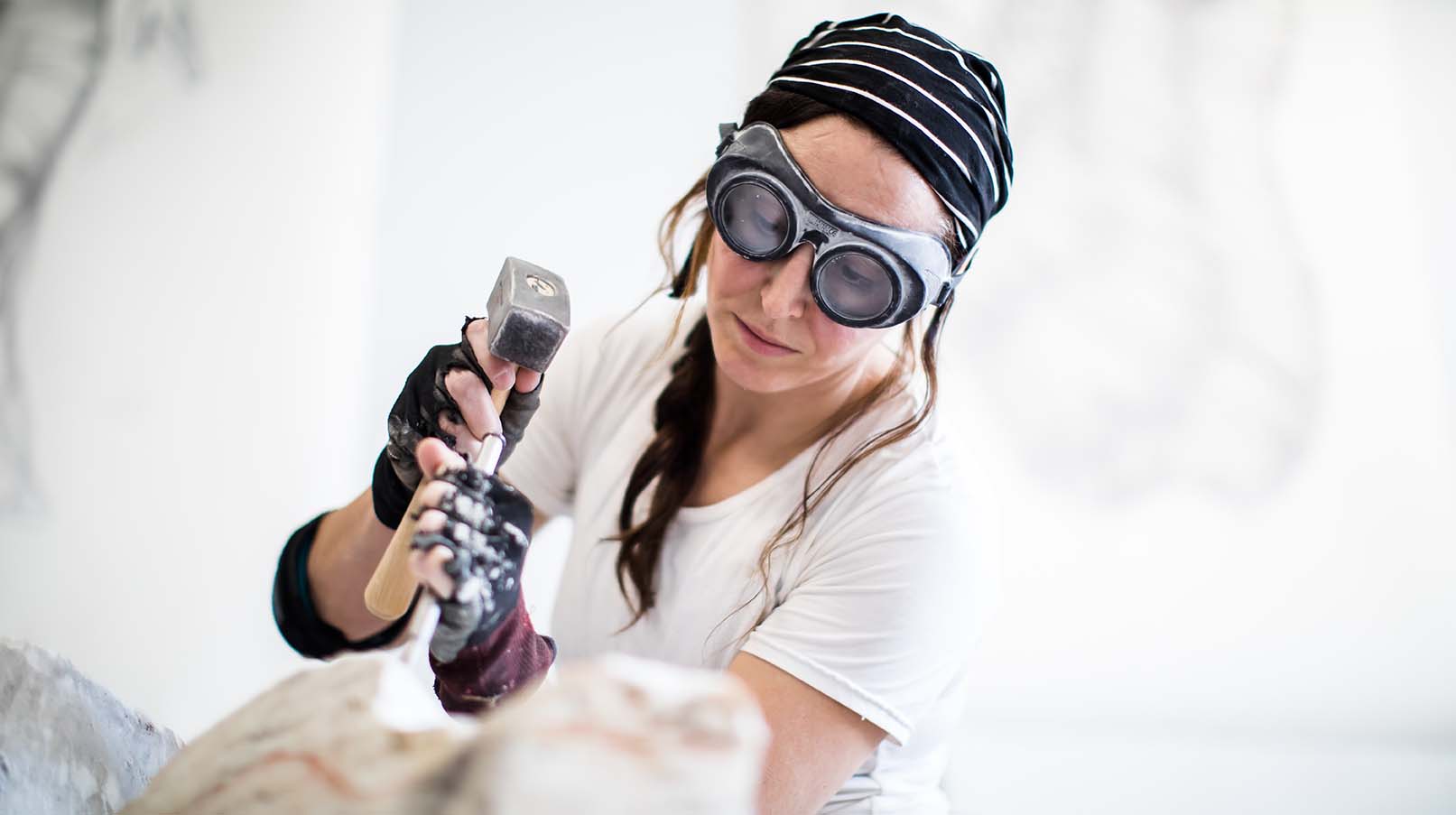 “When you’ve thought about something as long as I have, when you finally sit down and do it, it just flows out.”

Why stone? Part of the appeal, Bonaguro says, is integrating a piece of earth with her artistic vision. Another part is the physical challenge: pieces of stone flying everywhere, dust coating the room; goggles over eyes, hair covered, hands gloved and wrapped in cloth. It’s an arcane practice, she says, and one as old as civilization itself.

“It’s peaceful,” she says. “I know that sounds strange because I’m hitting something with a hammer, but you have to be very careful and sensitive. An incorrect hit of the hammer can shatter a sculpture.”

In 2016, Bonaguro spent a month in the artsy town of Pietrasanta, Italy, located near marble quarries so old Michelangelo himself once worked there. There, she purchased proper carbide chisels, diamond rasps, and 4,000 pounds of marble, which she shipped back to Chicago. She also trained with local artisans, who tried to convince her to use powered chisels. She declined.

Today, at age 42, she still creates in other mediums but stone-carving is her love. Her pieces have been exhibited in Chicago and throughout the country, as well as some private collections. She is also working with filmmakers on a full-length documentary about her work—and her magnum opus.

That would be a statue she’s been dreaming about for two decades, which is now in the early stages of design. She calls it the Modern Athena. Envisioned to be about 17 feet high, the female figure would be about the size of Michelangelo’s David. Bonaguro would begin “blocking” it from a single, massive piece of stone in Italy, then ship it to Chicago to finish. She’s hoping to complete it in about four years. But first, she’ll need a new studio—one with a very high ceiling.

Bonaguro’s goal is to create something awe-inspiring, a symbol of “female strength, beauty, and wisdom.” The reason? “Because,” she says, “it's time to do so.”