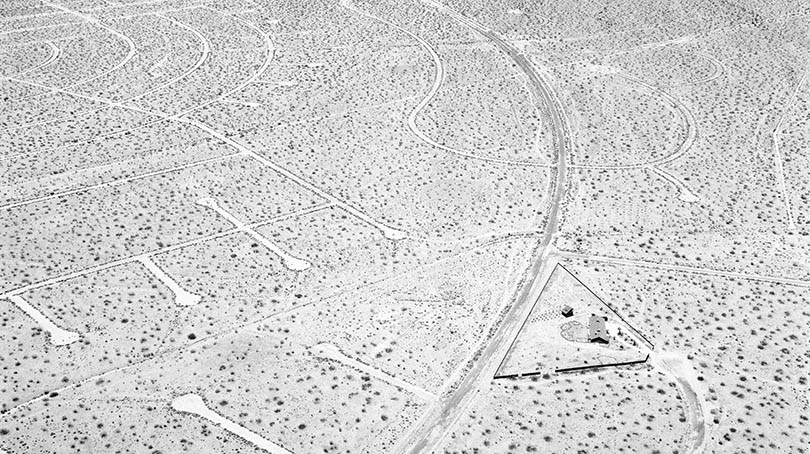 Shot on black and white film from a helicopter, Noritaka Minami's "California City (Real Estate)" offers a gritty look at a planned Southern California community that never came to be. (Photo: Noritaka Minami)

Art with Impact Captured on film

Through the photographer's lens

CALIFORNIA CITY, CALIFORNIA, COULD HAVE BEEN THE NEXT LOS ANGELES. That was the dream, anyway, of sociologist turned real estate developer Nathan Mendelsohn. In 1958, he bought thousands of acres in the arid Mojave Desert and drew up specs for a master-planned Southern California community, 203 square miles of spacious homes and verdant parks, all serviced by an intricate underground water system. Streets were named, lots laid out, parcels purchased. In the intervening decade, though, development ground to a halt.

Once-eager buyers sold their plots for pennies on the dollar, feeling hoodwinked by misleading marketing. Businesses balked. Today, that state’s third largest municipality by land area is covered in dirt and brush, home to just 14,000 people. From the sky, one sees a massive grid of orderly highways and cul-de-sacs, connecting to each other and nothing else.

High above California City is where Noritaka Minami found himself one day a few years back, strapped into a helicopter seat and perched precariously close to the chopper’s open window. Along with an assistant, Minami—an assistant professor of photography at Loyola University Chicago—had lugged five cameras on board in hopes of shooting the stark streetscape from on high. He’d researched Cal City as a graduate student at the University of California, Irvine, where he studied how photography can investigate overlooked aspects of the built environment. But he’d never tried his hand at aerial photography, particularly near Edwards Air Force Base, where airspace is restricted.

“It makes you airsick!” he remembers now, banking from side to side, swooping around for new angles. Minami employed the fastest black-and-white film he could acquire, equipment that would make his prints appear coarse and grainy, “the most brutal [visual] language possible.” He had 40 rolls, eight shots per roll, to capture this city without a future. He felt pressure to deliver, not to waste his chance. “When you’ve got your camera and you’re making your own art,” he says, “it’s miserable.”

In Loyola’s photography lab on Mundelein’s seventh floor, Minami lifted the resulting prints from a cardboard box and laid them gingerly on a table. With a self-deprecating smirk, he called them “my silly attempt at making abstract paintings.” They’re large (40 by 60 inches) and arresting, all pale dots and sweeping lines. Taken together, “California City (Real Estate)” demonstrates, in concise and gorgeous detail, the limitations inherent in a certain strain of modernist planning. “I want images that are strong on a visual level,” he says. “And I don’t feel like these two ideas—aesthetic rigor and conceptual and theoretical concerns—are mutually exclusive.”

Radio days: Loyola graduate Tom Hush uses the skills he learned at the student radio station in his role at WGN.

“I’m very interested in presenting photography as a serious form of contemporary art, and as a means of critically examining society.”

Minami immigrated to the United States from Osaka, Japan, in 1987, when he was 6 years old. His father was an academic researcher who valued “the pursuit of knowledge.” Minami developed an appreciation for art photography as a teenager, and studied painting and printmaking as an undergrad, at the University of California, Berkeley. In Irvine, he returned to his camera.

His practice is research-based, scrutinizing architectural projects and the urban landscapes they inhabit. The San Francisco Museum of Modern Art and the Museum of Contemporary Photography Chicago house pieces of his in their permanent collections, and he’s exhibited in galleries around the world. “I’m very interested in presenting photography as a serious form of contemporary art,” he says, “and as a means of critically examining society.”

Post-war Japan holds special appeal. In 2015, Minami published a monograph titled 1972, which received the 2015 Architectural Book Award from the Deutsches Architekturmuseum in Germany. The book focuses on Tokyo’s Nakagin Capsule Tower, a building that Minami first saw as a small child. It’s an anomaly in the Japanese capital, a modular apartment complex constructed in his book’s titular year by Kisho Kurokawa, a leading Japanese architect and a founder of the avant-garde architectural movement called Metabolism.

Almost Lego-like in its geometry, Nakagin consists of 140 prefabricated capsules that were intended to be replaced every 25 years, accommodating the changing needs of residents. When Minami first started visiting Nakagin, camera in tow, there was chatter that it might be demolished; the original capsules had not been updated in four decades. He would shoot using analog equipment, a large-format camera with slow film; there was a pleasant symmetry, he figured, in deploying “obsolete technology” to document an object on the edge of extinction.

Minami has gone back nearly 10 times. His photos never feature people, just the differentiated ways in which those people have organized their personal space. Like California City, Minami argues that the tower “represents a type of future that didn’t necessarily arrive in the city itself.”

The Nakagin Tower opened in March 1972 with 140 removable capsules. The concept was that the capsules could be swapped out over time, updating the apartments to match the changes in modern living. (Photo: Noritaka Minami)

Kurokawa's plan, however, never became a reality. Though he envisioned the capsules would be replaced every 25 years, the original structures were never updated and still stand today as they were originally designed more than 40 years ago. (Photo: Noritaka Minami)

The idea of "capsule living" being the wave of the future in Japan proved to be a false hope, and Nakagin Capsule Tower was the last of its kind completed in the world. (Photo: Noritaka Minami)

Now considered an obsolete model of living, the Nakagin Capsule Tower faces the threat of demolition to make way for a conventional apartment complex on the site. (Photo: Noritaka Minami)

Back in Loyola’s Department of Fine and Performing Arts (DFPA), Minami is ushering in his own new photographic era. Since he joined the department in 2015, DFPA has embraced contemporary technology, retrofitting an underutilized music facility by installing a 44-inch digital printer and other modern software. (A lighting studio is next on his wish list.)

Most of the adjunct instructors Minami has hired, meanwhile, are practicing artists, and they bring real-world knowledge back to the classroom. Loyola still offer classes in film photography, too, utilizing the Crown Center’s existing darkroom. That traditional style is not without its virtues, “making students slow down in a very tactile manner.”

The 38-year-old is cagey about his own forthcoming work, hinting only that a new series he’s been developing the last few months “is just clicking.” (No pun intended.) He’s also aware of the fact that people today are inundated with media, be it in a museum or on their phone. Attention is fleeting. That fact makes his job that much more exciting.

“It is an interesting challenge,” he says, tugging at a black beanie, “to create an image that could potentially stop people in their tracks.”