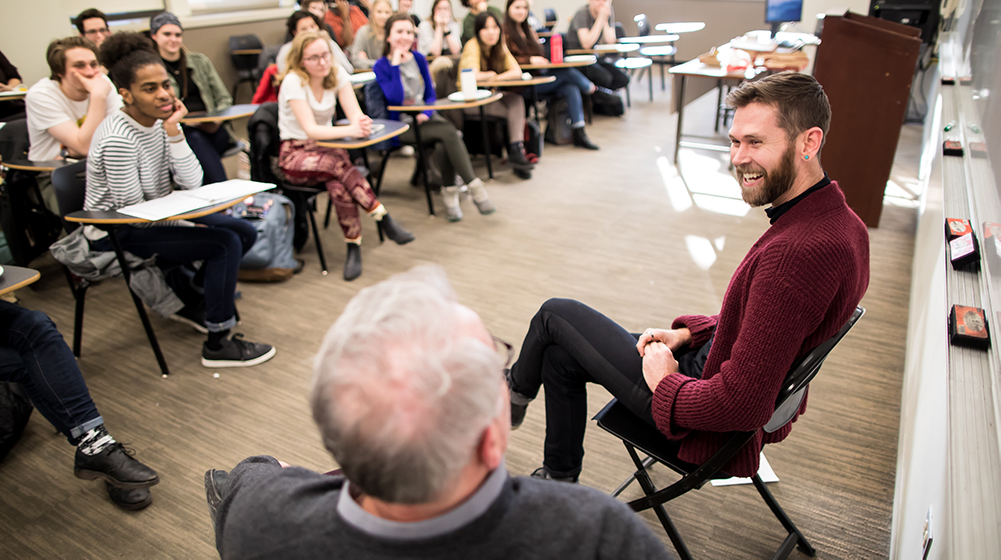 Philip Dawkins (BA ’02) shares wisdom with Loyola University Chicago theater students. The playwright dares audiences “to come and find out that we’re all the same, despite our vast differences.” (Photo: Lukas Keapproth)

Art with Impact Empathy on stage

A craftsman of the theater

A dramaturg is not quite a playwright, not quite an artistic director, not quite a producer. It’s a little of all of these things, but a job entirely its own. Some equate it to a kind of editor in a theater company: a person who solicits original scripts, reads and evaluates whatever texts come in, prepares adaptations and translations, and generally helps set that company’s artistic vision.

A few years back, a group of Loyola University Chicago theater students interested in dramaturgy organized an informal club. It’s a practical seminar, held on Friday afternoons in Mundelein Center—a way to build camaraderie in the Department of Fine and Performing Arts (DFPA), which is expanding its size and ambition. When the students are able, they host guest speakers. And every so often, they land a big fish like Philip Dawkins.

Dawkins graduated from Loyola in 2002. In the 17 years since, he’s built an enviable career as a prolific playwright, with shows routinely staged in influential theaters around Chicago (Steppenwolf, Raven, North Light) and beyond. Four of his plays have been nominated for Jeff Awards, the prestigious Chicago theater prize, including his critical breakthrough, 2011’s The Homosexuals. He was thrilled to hear that Loyola was staging its own production of Failure: A Love Story, his 2012 script about three sisters in the Roaring Twenties, at the Newhart Family Theater. So thrilled, in fact, that Dawkins carved out time to attend the opening performance and, three hours before curtain, entertain Loyola’s budding dramaturgists.

When Dawkins enters the classroom, he is wrapped in a bear hug by Mark Lococo, Loyola’s director of theater. (It doesn’t take much to corral Dawkins, who is rail-thin.) Then he assumes his position at the front of the room—legs crossed, a whiteboard at his back, three dozen students assembled before him. The set-up is reminiscent of Inside the Actor’s Studio, and Lococo stands in as the James Lipton-style moderator. As an interviewee, Dawkins is garrulous and articulate, with a mind that darts around quickly—wind him up and let him rip. After spending nearly two decades in the drama trenches, he’s accumulated all types of useful advice, too.

Playwriting is not a talent—like building a house, it’s a craft that anyone can learn how to do. (“You work hard, watch the house fall down, and then rebuild it.”) Write only when your ideas have had time to simmer; theater should be a “considered response.” Do all sorts of research and then put that research away. (“Don’t prove to the audience how smart you are.”) Don’t get cute and fall in love with your own voice. Show up and demonstrate your competence. Finding collaborators is like finding lovers. (“You know when it’s right, and you know when it’s not.”) Perhaps most importantly? “Remember that most theater is terrible.”

A culture of activism: See how dance instructor Sandra Kaufmann teaches her students to be a voice for change without saying a word. 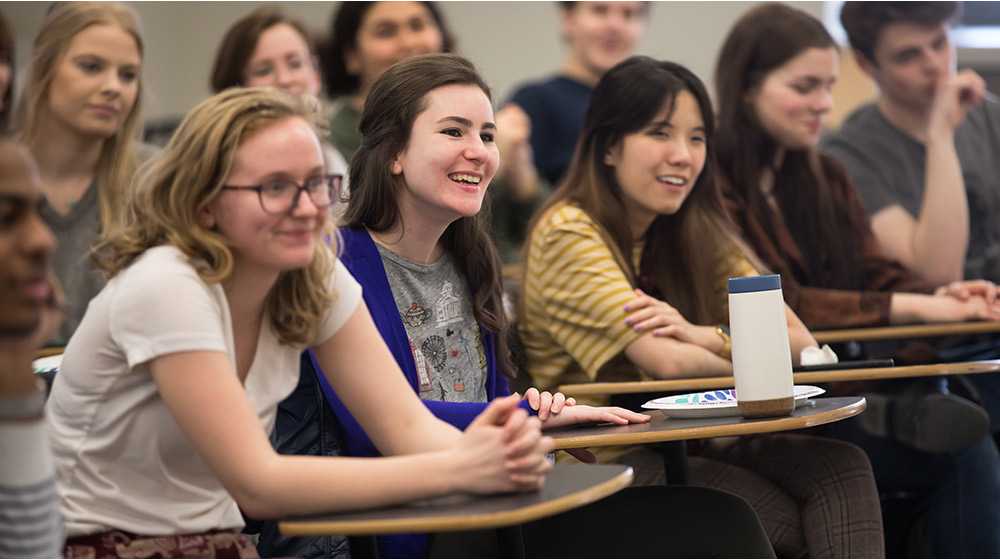 As a kid in Phoenix, Dawkins was first introduced to theater at the high school where his mother taught math. She would attend the school plays to support her students, and Dawkins would tag along, thrilled by the transportive pageantry. He started acting at the local theater company, Theater Works, and checking out from the library “old, hardback, Ivy-league colored” drama collections, absorbing material without fully comprehending all the nuances. At home, Dawkins would stage one-acts starring his GI Joes and Troll dolls. “I used to put on plays for my parents,” he says. “They must be very patient people.”

When he matriculated at Loyola in 1998, the theater department was slowly gaining its footing. At the time, there weren’t enough students interested in playwriting to fill a class, so Dawkins formed a four-year mentoring partnership with Nicholas Patricca, now a professor emeritus of theatre. (He earned a scholarship by performing an original monologue about lobsters.) By his senior year, the department produced Dawkins’ first full-length script, a loose adaptation of a Truman Capote short story. The whole operation felt slightly rag-tag, albeit in a creatively nurturing way. “The point of learning how to do this is to do it, and to do it in community, and to do it in service to the world,” he says. “[At Loyola,] that was very much how I experienced theater.”

Out on the job market, Dawkins learned to take risks, and to act calmly when complications inevitably arose. His costume design construction teacher from Loyola hired him as a freelance stitcher right out of school, which helped with bills. (Teaching drama would eventually cover the rest; hardly anyone gets wealthy writing plays.) To theater directors across Chicago, he made his availability and enthusiasm known, chipping in at dramatic readings whenever there were openings. And he wrote, and wrote, and wrote some more. He’d storyboard acts using Post-It notes slapped on the wall, or call himself and leave long voicemails of potential dialogue. The reception he received for The Homosexuals proved to him, once and for all, that he could  “write things and people will show up and watch it.”

Failure debuted at Victory Gardens (the old Biograph) in 2012. He’d been circling the idea of loss, of how people process grief and mortality. The real inspiration for the show came on a walk through an Indiana graveyard, when Dawkins and some friends came across an odd family headstone: FAIL. Could he write a set-piece about a clan of Fails? “I knew who my sisters were and what was going to happen to them right away,” he says. “The whole thing happened in my head, somewhere on the drive between Gary and Pilsen.”

Set in 1920s Chicago, the story centers on eccentric sisters who, on the precipice of the Great Crash of 1929, all fall for the same financial trader—Mortimer Mortimer—and subsequently die. The show’s tone is more reminiscent of a fairy tale than a horror story, though, and it evokes the central themes and styles that cut through the bulk of Dawkins’ plays. There’s charming banter, some grotesquery, dark wit, earnest sentiment, and a healthy heaping of empathy. “I like taking characters or stories that are very specific, that leave little wiggle room for universality,” he says, “and then daring people to come and find out that we’re all the same, despite our vast differences.” 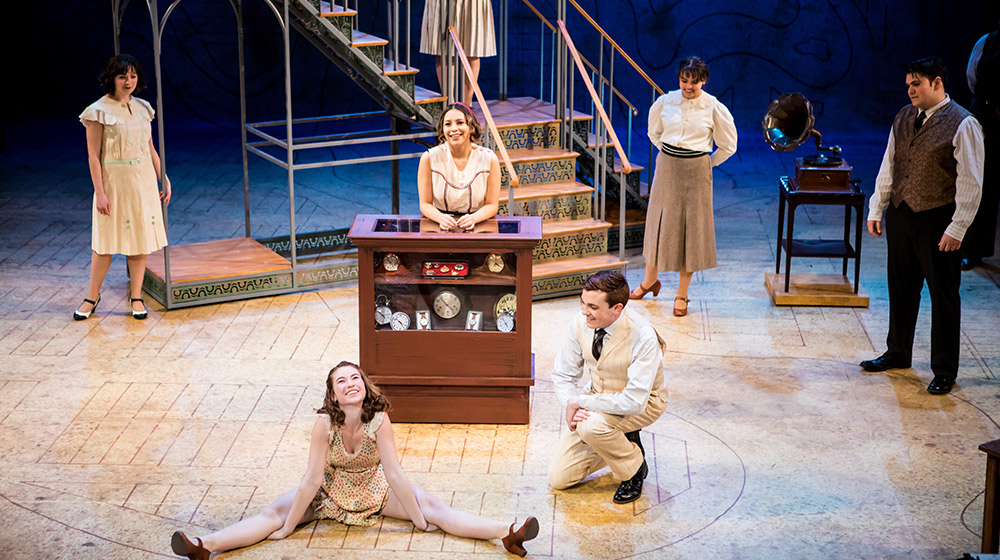 This spring, students from the Department of Fine and Performing Arts performed Failure: A Love Story, a 2012 production written by Philip Dawkins. Dawkins was on hand for opening night. (Photo: Lukas Keapproth)

When the last of the would-be dramaturgs exhaust their curiosity and file out of Mundelein, Dawkins accompanies April Browning, DFPA’s managing director, on a walk to Newhart. It’s serene inside the theater; a lonely technician shuffles along the catwalk, adjusting lights. Dawkins grabs a seat in the fifth row, easing into a plush red chair.

Opening night on his own college campus is an appropriate setting in which to reflect. Dawkins’ pace, he’ll admit, has slowed as he’s gotten older. “I’m not the person I was when I was 19 and didn’t know anything and thought I knew everything,” he says. “I’m made out of criticism now.”

Even so, he keeps plenty busy. On his docket at the moment: an historical script for a Minneapolis children’s theater company about a meatpacking plant strike, a translation of a Québécois play by Michel Tremblay, and a queer adaptation of A Christmas Carol. Ideas flow as freely as ever. There are plot devices and lines of dialogue that he’s never used and can’t quite shake. Titles, even. Before he retires, Phillip Dawkins will write a play called I Will Take You There and Leave You. He just needs to figure out what it’s about.