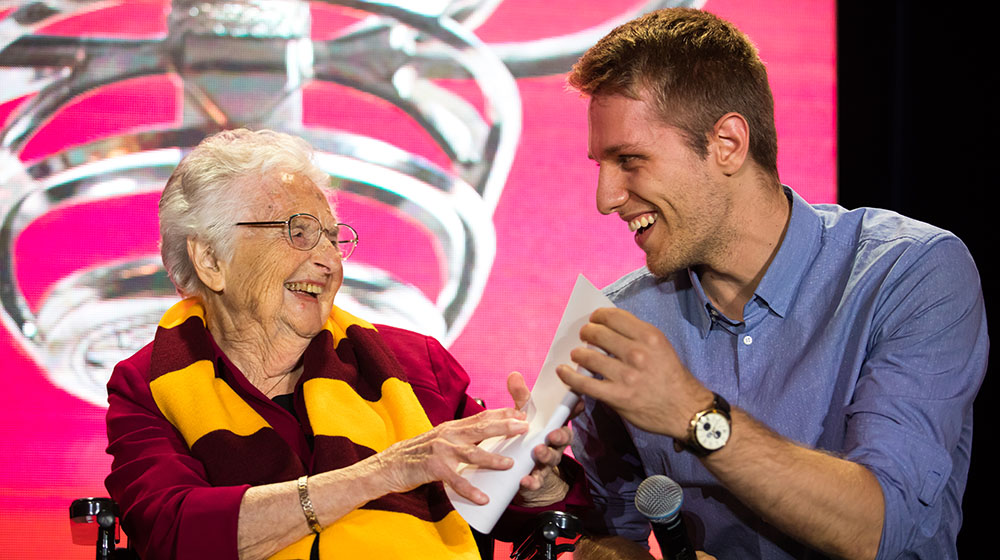 Sister Jean Dolores Schmidt, BVM, has always had a close relationship with student-athletes like Bruno Skokna, right. So it should come as no surprise that Sister Jean has been spending her stay-at-home time calling basketball players like Skokna to check in on how they're doing. (Photo: Lukas Keapproth)

Student experience Caring for one another

Loyola athletes may be stuck at home during the COVID-19 pandemic, but they've gotten encouraging phone calls from a familiar voice

Senior Bruno Skokna usually ignores his cell phone when unknown digits flash across the screen. He doesn’t know why he picked up a week ago, during the early stages of COVID-19 social distancing. Intuition, maybe? Or just a nagging feeling that someone important might be checking on him?

Sure enough, a quiet yet reliable voice greeted him from the other end. Was it Bruno, she asked? Did he have a few minutes to chat? “It was Sister Jean—I couldn’t believe it,” Skokna says. “I didn’t even know she had my number!”

When the chaplain for Loyola University Chicago men’s basketball team returned from Arch Madness in St. Louis, in early-March, she wrote customary emails of encouragement to the squad. In those messages, she requested they come to her office for an appointment, both to debrief on a successful season that was and to discuss a mission integration project they’d all been working on, about the “desires of the heart.” The pandemic disrupted all of those plans.

“I decided on March 16, after everyone got settled at home, that I would just give them a call,” Sister Jean says. She’d do a couple every day, not too early in the morning (in case the young men were catching up on sleep). So as not to bother their mothers, she’d dial their cell phones. She wanted it to be informal, reassuring. “I talked to them about how they are feeling and how their parents are feeling, how this is affecting their life at home, how they are going to do their courses online,” she says. “And then we talk about the next season of basketball, of course.”

She was especially concerned about Skonka, the only senior on the roster. His parents and brother had booked flights from their home in Croatia; they were set to make the long trek in May for Skonka’s graduation, the first visit to the United States for his mom and dad. He’d mentioned those plans to Sister Jean a few weeks prior, and she’d insisted the whole family swing by her office so she could meet them. “I was so excited to show them around, everything I have lived through these last four years,” Skonka says. “It was a huge deal for me.” 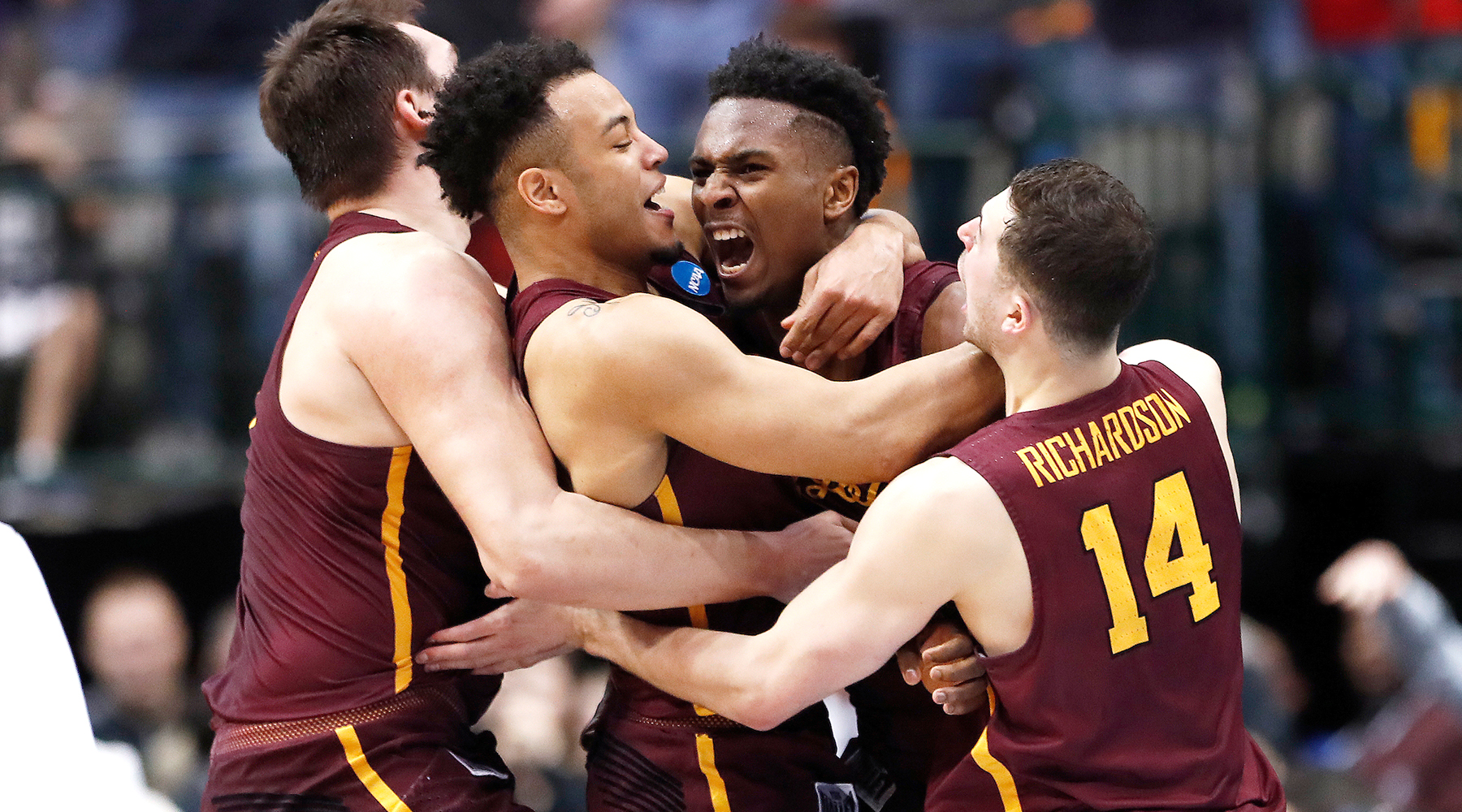 Did you miss the fun of March Madness this year? Take a look back and relive the excitement of Loyola's historic 2018 Final Four run. 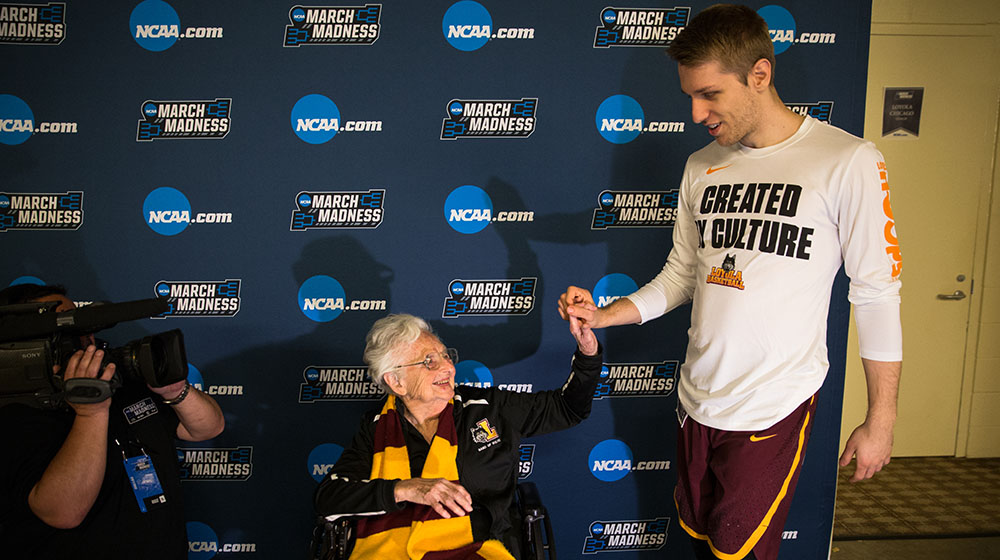 The call wasn’t especially long, but it was meaningful. She asked how the guard was holding up, if he needed anything. He volleyed the question right back at her. “Especially coming from her, being 100 years old and thinking about my family, it meant a lot,” he says. “She’s fearless, for sure.”

Skokna is hopeful his family can rebook their scratched trip to attend his postponed graduation later this summer. In the meantime, he’s adjusting to his new routine, holed up in his Rogers Park apartment finishing four classes remotely for his MBA in finance, which leads to “constant work and studying.” And he tries to get out and run at least once each day, even if his parents are anxious about his health.

Sister Jean isn’t worried about the team’s ability to finish the strange semester strong. “The athletes,” she says, “are the most disciplined young people we have at the University.” The chaplain is keeping herself characteristically busy, too, holding virtual office hours starting at 7 a.m. and going at least until 3:30 p.m., when Jeopardy! airs.

The most difficult adjustment, she says, is the absence of hoops: “Oh I miss it terribly. The end of the season is the hardest part of the year.”

It isn't just basketball players who are bolstered by Sister Jean's calming words. Her video message to the community during the COVID-19 crisis has become an international hit. Watch the video