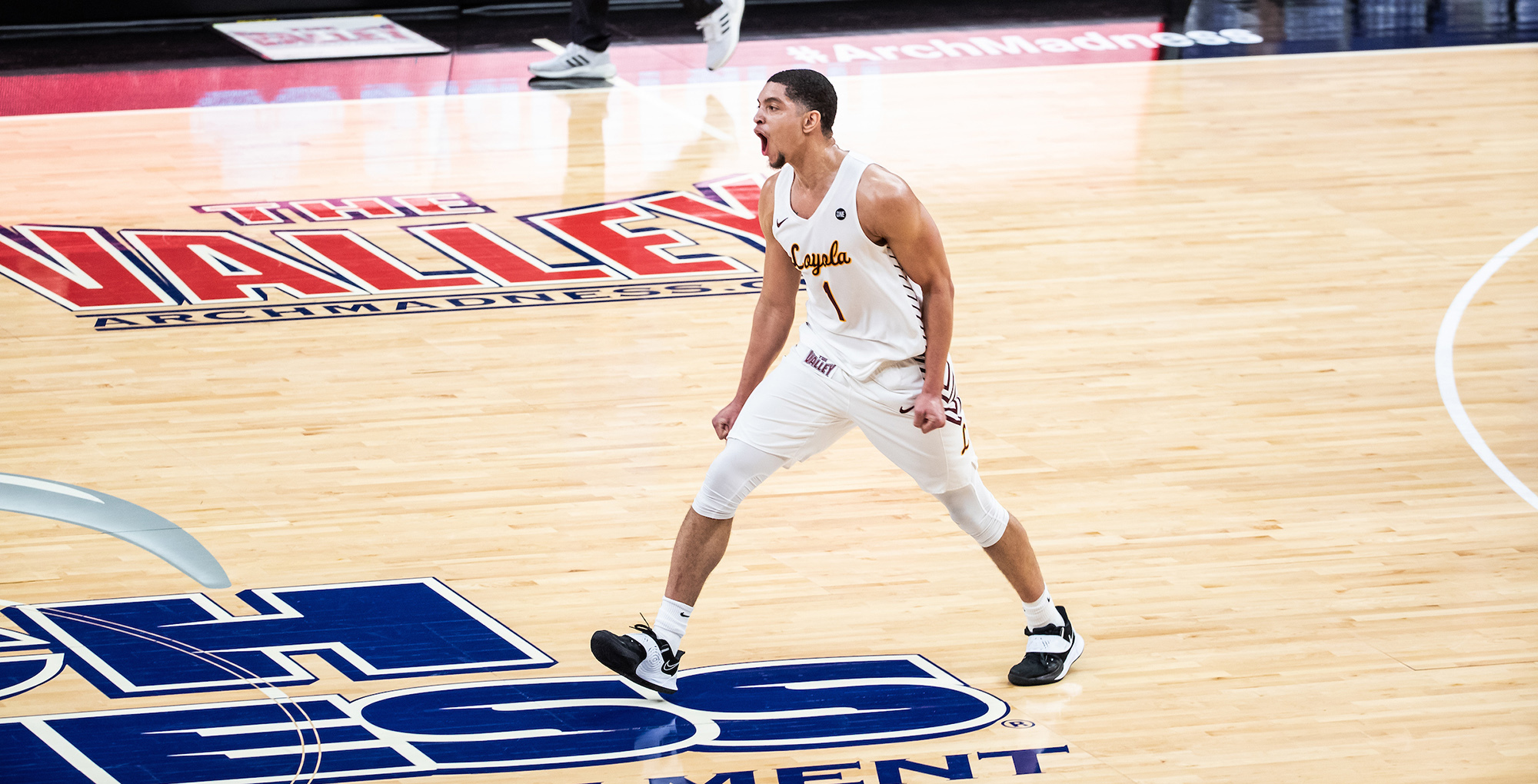 Senior men's basketball co-captain Lucas Williamson was just a freshman when he emerged as a key reserve on the 2018 Final Four team. This year, Williamson leads as a seasoned senior as the Ramblers head to March Madness once again. (Photo: Lukas Keapproth)

Sitting in a car on the way to a family member’s house on May 26, 2020, Lucas Williamson looked down on his ringing phone. A familiar name appeared on the screen and Williamson’s stomach churned. He felt like a fifth grader being summoned to the principal’s office.

“Whenever [Loyola University head basketball coach Porter Moser] calls me, I expect the worst,” Williamson says with an innocent chuckle.

On this day, Moser simply wanted to chat with Williamson, a rising senior and one of his team’s principal leaders. The day prior, video surfaced of George Floyd’s death in Minneapolis at the hands of police officer Derek Chauvin, a widely viewed act that would soon inspire loud protests in more than 150 American cities, including Chicago. Moser wanted to know how Williamson was feeling, an earnest question that put Williamson, admittedly disturbed by the circulating video of Floyd’s death, at ease. Moser assured Williamson that he was committed to finding solutions and interested in ways the Loyola basketball program could ensure an inclusive, respectful environment.

In Moser’s voice, Williamson recognized support, encouragement, and sincerity. And it mattered. “Hearing from coach let me know that other people were feeling the same way and are about this issue in the right way, and that gave me hope,” Williamson says.

When Williamson first arrived at Loyola in fall 2017, a self-described “curious kid” with big dreams, he was an 18-year-old leaving his West Loop roots for life on the North Side. Living on his own for the first time, Williamson wondered about his ability to conquer the challenges ahead. Could he compete in big-time college basketball? Could he balance athletics and academics? Could he position himself for a successful future?

As a freshman, Williamson emerged a key reserve on the 2017-2018 Loyola squad that earned the Ramblers their first NCAA Tournament berth in 33 years and their first Final Four appearance since JFK inhabited the Oval Office. That historic March Madness run elevated the profile of Loyola’s basketball program and its players, Williamson included.

Six months after the season’s conclusion, in fact, Williamson found himself at Loyola’s 2018 Founders’ Dinner, the University’s annual fundraising event for student scholarships. After Jill Biden offered a stirring keynote speech about academic accessibility, Williamson walked to the dais at Chicago’s Radisson Blu Aqua Hotel. “It almost felt like a setup, like how was I supposed to follow that?” Williamson recalls.

But as he did on the court amid nerves and glaring eyeballs, Williamson delivered. He spoke about education opening doors, his commitment to being a student athlete, and representing the Loyola community. As the room rose in applause at the end, Williamson smiled.

It can’t get better than this, he thought.

Don't miss an update about the Ramblers in the NCAA Tournament by following along on Loyola Athletics. 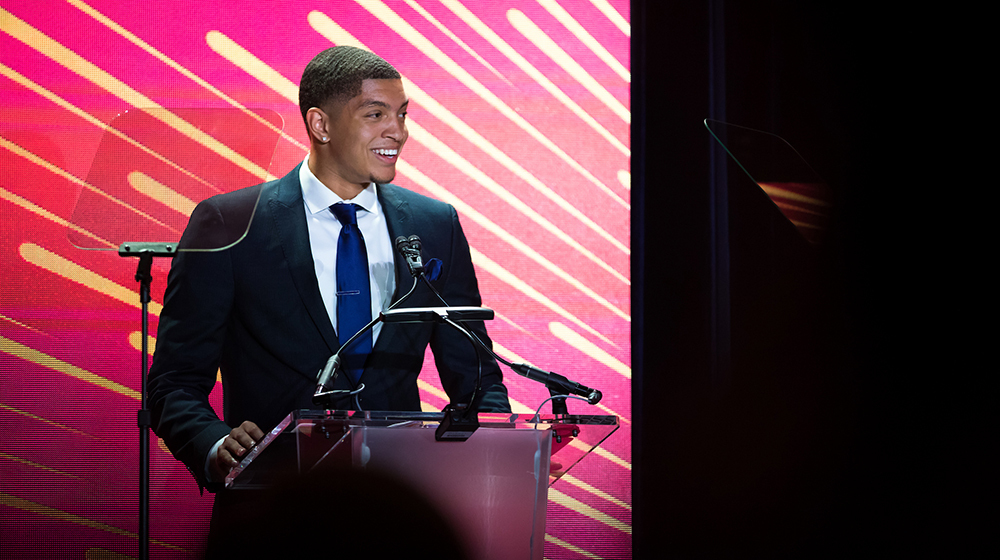 “Lucas is meant to impact people. His voice and actions are always meaningful and powerful, and he’s a young man who wants to influence change.”

- Porter Moser, Loyola men’s basketball head coach, on Lucas Williamson's ability to make change on and off the court

Following those opening-year highs, Williamson’s sophomore and junior years in Rogers Park offered lessons in resiliency and resolve. Williamson suffered two hand injuries and missed nearly half of the 2018-2019 campaign’s 34 games as the Ramblers endured a March without any madness. Williamson calls that season “the lowest point” in his basketball career.

The following year, with Loyola well positioned for a NCAA Tournament bid, the Ramblers fell to Valparaiso in the Missouri Valley Conference Tournament before the coronavirus pandemic took away any chance of post-season basketball.

Two challenging seasons provided Williamson tough-love lessons in patience and perspective. “Sometimes you have to sit down with your emotions, and that’s what I did,” Williamson says. “Rather than waking up and being angry with the situation, I found a way forward with a positive attitude.”

He also discovered immense support from his teammates and the greater Loyola community, finding reassurances and energy even as the memorable Final Four run faded further into the background. “Knowing I had people who believed in me, counted on me, especially in tough times, just inspired me,” Williamson says. “I felt people had my back.”

Off the court, Williamson pursued his upper-level journalism classes with a determined spirit. He savored the core journalistic principle of being direct and to the point. With sharpened writing and storytelling skills, Williamson crafted original multimedia stories and grew interested in meaningful news coverage that could inform and educate. This year, he’s been working on a feature-length documentary with an independent filmmaker, on which he is both a co-writer and narrator.

Through his coursework, Williamson began to better understand nuance and found himself increasingly eager to dig below the surface of issues to extract more meaning and insights. “When I got [to Loyola], I looked at life in black and white,” Williamson says. “Now, I see those shades of gray.”

Corey McQuade, who recently hosted Williamson as an intern at his Northwestern Mutual office, observed Williamson’s inquisitiveness firsthand as the two discussed social issues such as the wealth gap and diversity and inclusion efforts. “What I’ve seen in Lucas is a young man who’s continued to gain clarity and confidence,” McQuade says. “He’s curious, asks questions, and wants to be a catalyst for change.”

“Knowing I had people who believed in me, counted on me, especially in tough times, just inspired me. I felt people had my back.”

Speaking up, standing up

Two weeks after Floyd’s death and his candid talk with Moser, Williamson began penning an opinion piece for the Loyola Phoenix about race in America. Though Williamson had long shied away from discussing race, dreading the inevitable discomfort such conversations often bring, he felt the greater good overpowering any internal unease. “I understand these uncomfortable conversations are necessary if we’re ever going to bring about real change,” he says.

Armed with support from his teammates and coaches, skills cultivated in Loyola’s journalism classrooms, and a platform as one of Loyola’s most recognized students, Williamson sat with his computer. Empowered and confident, he wrote. “I felt more prepared, more experienced, and more developed as a writer,” Williamson says. “The words just flowed because I was writing how I felt. These were my emotions and they were strong.”

With direction and purpose, Williamson spoke of a fractured criminal justice system, and persistent inequities in education. He offered solutions, such as re-allocating funds “towards defeating the causes of crime in our impoverished neighborhoods,” and urged others to combat a virus that impacts quality of life and livelihoods. “Racism is a disease that, left unchecked, will plague our country perpetually,” Williamson noted in the June 15 editorial.

Four years ago, Williamson would not have been so outspoken. “Not a chance,” he admits.

But Loyola, Williamson insists, has transformed him. He’s more reflective, more thoughtful, more aware, and resilient. Moser has seen it firsthand, calling Williamson built “to lead” with passion and his beliefs.

“When Lucas was a freshman, he was just soaking everything in … and now he has really learned to lead with his voice and his actions,” Moser says. “He’s meant to impact people. His voice and actions are always meaningful and powerful, and he’s a young man who wants to influence change.”

Williamson considers that growth, his own personal evolution from curious, big-dreaming bystander to purposeful, active leader, the greatest gift Loyola could have provided. “I’ve spent the last four years living the dream,” he says. “I really consider myself blessed.”

Lucas Williamson's career wins, the most in school history

Lucas Williamson and Cameron Krutwig both started as freshmen on the 2018 Ramblers team, and like fellow co-captain Williamson, Krutwig has become a standout star in 2021. Learn more about Krutwig's impressive four years as a Rambler.