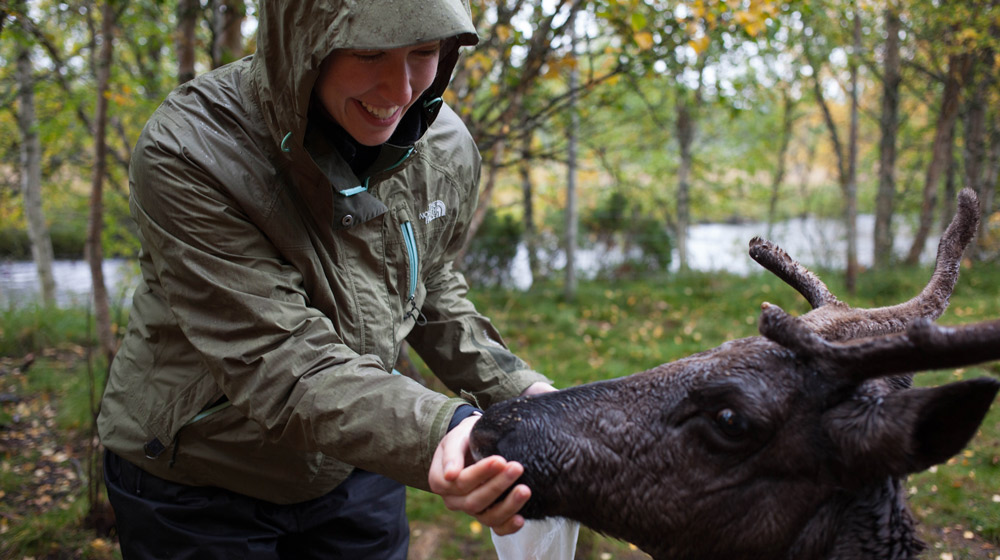 Olivia Urbanski ('18) feeds a reindeer in Grövelsjön, Sweden, while participating in Loyola's study abroad semester at the Newman Institute, a Jesuit university in Sweden.

Olivia Urbanski (BA ’18) has been interested in nature since she was a kid, when she traveled to the Bighorn Mountains in Wyoming with her family every year and led the Tree Huggers environmental club at her high school. She still has the club’s “tree hugger” sticker on her reusable water bottle today.

“When I was looking at colleges, I realized I could study what I really love all the time, as my major,” said Urbanski, who is from Eden Prairie, Minnesota. 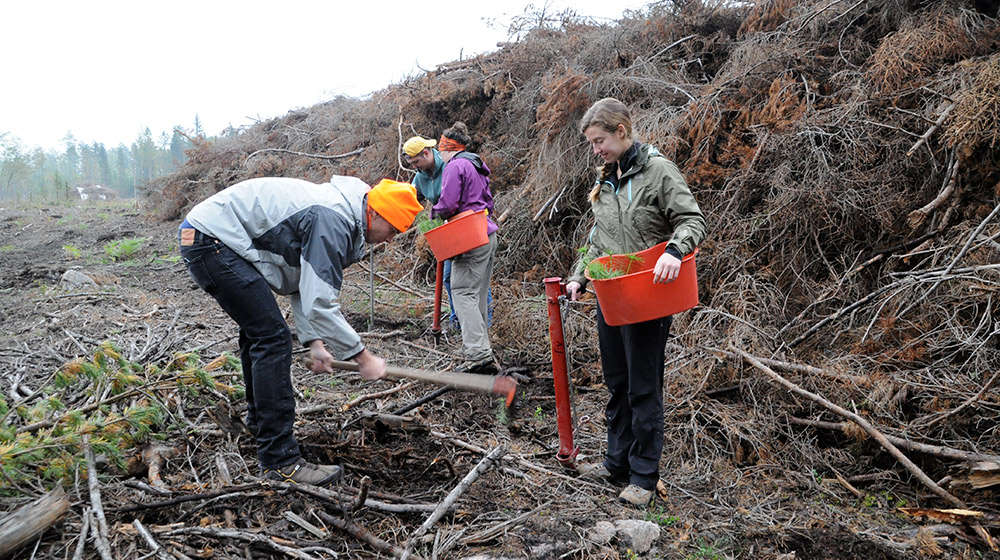 Urbanski and her fellow Loyola study abroad students plant saplings in a Swedish forest as part of the Newman Institute's sustainable forestry practices.

From Chicago to Sweden

Loyola’s launch of the Institute for Environmental Sustainability in 2013 coincided with Urbanski’s college search.

“Loyola’s IES program was up and coming, and had recently become its own school,” she said. “I thought it would be pretty cool to be at an institution that was just starting this, and I could be a part of that.”

She came to Loyola as an environmental studies and international studies double major.

Urbanski, who is also part of the interdisciplinary honors program, spent the fall of her sophomore year in Uppsala, Sweden, through Loyola’s partnership with the Newman Institute, a Jesuit university. Sweden is an ideal location to learn about sustainability and the environment—only 1 percent of the country’s waste ends up in landfills, making it one of the most sustainable countries in the world. One of her professors there was Andreas Carlgren, Sweden’s former minister for the environment and the architect of many of their national environmental policies.

Rachel Leamon, the executive assistant to the dean and an academic advisor in IES, encouraged Urbanski to take advantage of Loyola’s program in Sweden.

“When I first met Olivia, I could tell she was eager to try something new and soak up as much information as possible,” said Leamon, who is now Urbanski’s academic advisor. “Throughout her semester abroad, she would send me email updates about the experiences she and the other Loyola students had in Sweden, how she was making connections with international researchers and specialists, internships she was learning about, and more. When Olivia returned to campus the following spring, she was full of energy and ready to take on the world. I really believe that studying abroad in Sweden was a life-changing experience for her.” 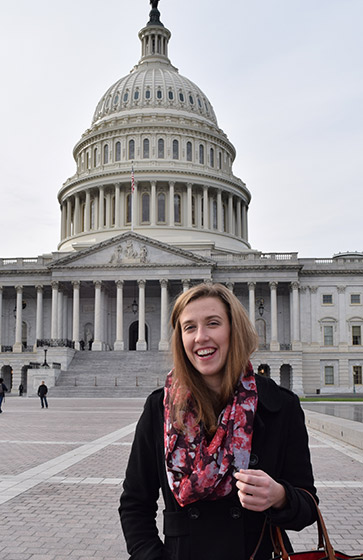 The semester in Sweden was only the beginning of Urbanski’s explorations. In Alaska, she interned with park rangers and ran the Junior Rangers summer program at the remote Lake Clark National Park and Preserve, which you can only get to by boat or plane. In Kenya in the spring of her junior year, she worked as a wildlife conservation intern for Ol Pejeta Conservancy, home to the last northern white rhinos in Africa. After experiencing the height of efficient sustainability in Sweden, Urbanski wanted to see how conservancy worked in a developing country.

Then it was back to the United States for a semester in Washington, DC, interning at the United Nations, a place she would someday like to work.

While she was in DC, Urbanski learned about Planet Forward, an online news site run by the George Washington University School of Media and Public Affairs that teaches, celebrates, and rewards environmental storytelling by college students. She has since signed on as one of 14 national campus correspondents, contributing articles, interviews, and videos to the Planet Forward website. She was also a finalist in their annual story competition.

After graduation, she wants to work for an environmental nonprofit or in environmental advocacy in DC. Eventually, she plans to go back to school for a master’s degree to study the environment and security.

“As climate change happens, we are seeing more intense natural disasters—like what’s happening in California with the wildfires and drought and in South Africa, where they are running out of drinking water,” she said. “And I saw that firsthand in Kenya, too; people did not have enough water. When people don’t have enough natural resources, it is going to come out in conflict and that instability of society is a national security issue. We have enough food and water on this planet, but it is not dispersed equally, and I want to be part of making sure that people have enough food, enough water.”