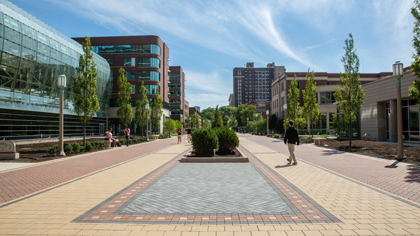 Results for the “Name Kenmore” contest are in and the street formerly known as Kenmore Avenue will now be called St. Ignatius Community Plaza. While the initial suggestion was simply St. Ignatius Plaza, the name has been slightly amended by the University and its president and CEO, Michael J. Garanzini, S.J., in order to be more inclusive of Loyola’s relationship with its host communities. We congratulate, and thank, Shireeta Allen for suggesting the winning name.

The contest generated more than 200 nominations, which were eventually narrowed to three finalists. Voting determined the winning name. The contest was announced in August at a ribbon-cutting ceremony to celebrate the new space—one of learning, sharing, relationship building, and most importantly, community.

Several events will be held at the St. Ignatius Community Plaza, with the first one scheduled for May 30, 2015. A fair will showcase the work of a partnership between Loyola’s Department of Fine and Performing Arts and Edgewater-based PIVOT Arts. The organization has been in residence at the University’s Mundelein Center since 2013. After that, Loyola students, neighborhood residents, and guests can look forward to an outdoor movie in the summer of 2015, and an environmentally themed October Fest in the fall. Both events will be held in partnership with 48th ward Alderman Harry Osterman, The Edgewater Chamber of Commerce, and the Edgewater Environmental Sustainability Project.