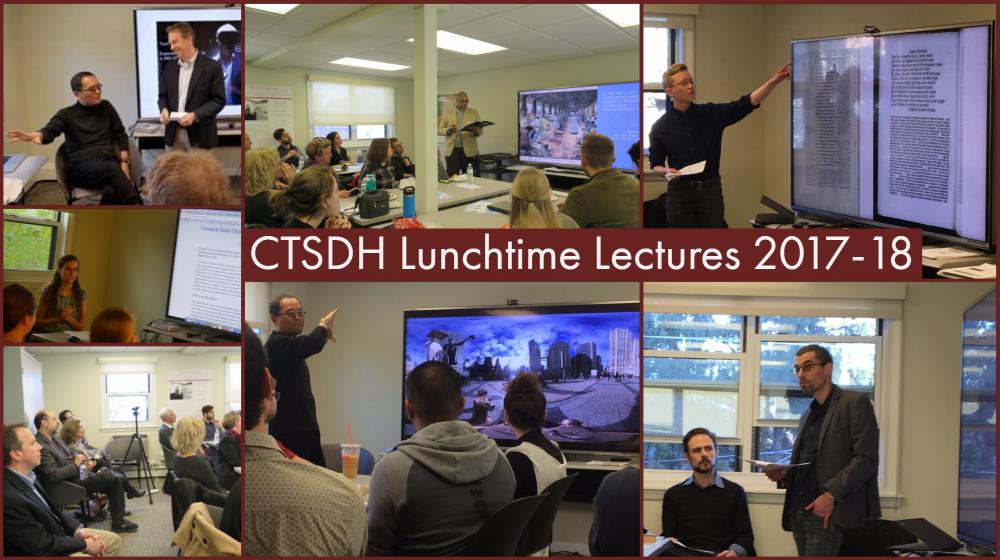 We've concluded our series of outstanding Lunchtime Lectures for Spring 2018! Thanks for joining us and keep an eye out for more great Lunchtime Lectures coming soon! In the meantime, be sure to join us on April 26 at 4pm in the CTSDH for our end of year celebration!

From the Attic to the Web: Building the May Weber Ethnographic Digital Collection

The May Weber Ethnographic Study Collection is housed on the fourth floor of Mundelein Center. Students, faculty, and university visitors pass by this room all the time without realizing it contains a trove of aesthetically compelling objects from cultures around the world. The Center-supported project, "Decolonizing the Museum Catalogue" is an effort to increase accessibility of the collection through a digital database, while also addressing concerns about knowledge: whose knowledge does the catalogue contain? How does this knowledge shape representations of other cultures?

This talk focused on the development of the catalogue by DH students enrolled in DIGH 500 during the Fall 2017 semester. They discussed progress made on the project, specifically some of the challenges they encountered in translating theoretical and scholarly critiques of digitized museum catalogues into a functional, web-accessible database.

Digital Affect and the Marginalized Body: Pondering an Autoethnographic Turn in the Digital Humanities

When utilizing digital methods to research such social phenomena as slavery and other forms of dehumanization, we face a sort of ontological crisis.  How do we prevent re-objectifying marginalized humans while reducing them, as a matter of course, to computational attributes?  Frederick C. Staidum (Department of English) discussed the successes and challenges of digitally mapping the shared topographies of slavery and tourism in antebellum New Orleans.  He shared insights regarding his embrace of an autoethnographic sensibility, which opens new interpretative possibilities and more effectively grapples with the human in Digital Humanities.

Fair Use in Teaching and Research

Margaret and Niam helped get us ready for Fair Use Week (February 26-March 2, 2018) with a guided discussion about what fair use really means and tips for telling if your intended use is allowed. They shared some ideas about how to use fair use in teaching and research, and how to share your own experiences with your colleagues.

The Spirit of Notetaking: Traditional Research and Writing Strategies for the 21st Century

Do the old ways of researching and writing work still work in the digital age? George Thiruvathukal (Professor of Computer Science) and David Dennis (Professor of History) shared their thoughts on the important topic coming out of their recent work creating ZettelGeist, a plaintext note-taking system, inspired by the ZettelKasten  Method, which supports the familiar tried-and-true method of organizing research using a card index. This was a great chance to learn about a promising new tool in development.

Explorations towards a new edition of Walton's Boethius

Boethius’s Consolation of Philosophy (c. 525) was one of the most influential literary works in medieval Europe. The Consolation was translated into English three times before the advent of print, but the most successful of these early English translations remains very little known to modern readers. Ian Cornelius, Nicholas Coteus, and Lex Podell discussed the thinking and process of creating a new edition of the 1410 English translation of this important work.

Turn Around – Experiencing a Story in 360 VR

When a camera covers all angles in a shot, how may a story be scripted in narrative? When nothing can be hidden around the camera, how may technical setup enhance storytelling? 360 VR visual production and presentation are facing challenges both in the methodology of telling a story and technology of implementing storytelling. In this presentation, Jamason Chen led the audience in an exploration of new ideas and methods of storytelling in a virtual reality environment.

Explore Common Sense (explorecommonsense.com) is a digital critical edition of the first British edition of Thomas Paine's pamphlet Common Sense, which is notable for the redactions that prevented the printer from being arrested for seditious libel. Creators Kate Johnson, Marie Pellissier, and Kelly Schmidt will discuss the process of working with an original copy of the text in University Archives and Special Collections, creating the site, and its potential as both an interpretive and learning tool inside and outside of the classroom.