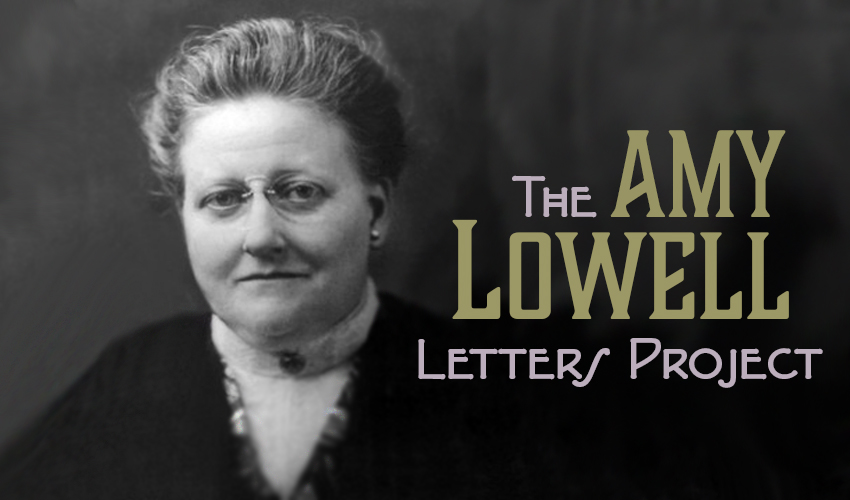 Congratulations to Dr. Melissa Bradshaw for receiving a Research Support Grant from the Office of Research Services for her digital edition project, “The Amy Lowell Letters Project.” The $5,000 grant will allow Dr. Bradshaw to continue working with Digital Humanities and English graduate students to continue encoding letters and assembling the online archive.

The Amy Lowell Letters Project (ALLP) is an open-access, digital scholarly edition of the letters of American poet, editor, and critic Amy Lowell (1874–1925). This project transcribes, annotates, and encodes letters written by Lowell, archived in her collected papers at Harvard University’s Houghton Library (MS Lowell 19.1). The letters have been scanned by Houghton Library from Lowell’s papers, and can be viewed through Harvard’s HOLLIS for Archival Discovery.

At the time of her death in 1925, Lowell was once one of the most celebrated and sought-after authors in America. Her tempestuous public readings drew crowds of thousands, and her books flew off bookstore shelves. Her critical reputation suffered in the years following her death, however, primarily because her successes in marketing poetry to popular audiences left her vulnerable to the accusation that she was less poet than propagandist, a charge registered most notably by fellow Imagist poet Ezra Pound, with whom she had a long-standing feud. Consequently, no representative collection of her letters exists, even though, according to the librarians at the Houghton Library, hers is one of the most accessed archives in the library, since she corresponded with virtually all the most prominent writers and publishers of her time. Her letters show the many roles she played as a poet, editor, critic, and de facto literary agent, involved in everything from designing book covers, to writing ad copy, advising marketing plans, and negotiating royalties.

Lowell’s collected correspondence is massive, containing almost 3,000 letters, almost half of which are written by Lowell and therefore open to use for this project. The initial phase of “The Amy Lowell Letters Project” (ALLP) will focus tightly on the years of Lowell’s career, 1910-1925, showcasing letters that offer insights into the battles, both public and private, surrounding modern poetry, and dramatizing Lowell’s role in the development and dissemination of a controversial, experimental poetics. Her letters show her in conversation with some of best-known American and European poets of the early twentieth century, discussing, reworking, and usually arguing about works we now consider canonical. But they also show her engaged in equally impassioned conversations with once prominent literary figures less well known today. Perhaps most importantly, her letters show the depth and complexity of her relationships with behind-the-scenes players whose roles in establishing what we now consider the modernist poetry canon are usually underrepresented or overlooked: editors of both little magazines and popular weeklies, heads of publishing houses, newspaper columnists, translators, booksellers, literature professors, and book sellers.

ALLP asks, how might correspondence metadata reveal the labor behind the modernist poetry canon: the queries, submissions, revisions, rejections, and financial transactions that bridge artistic creation and public consumption? More specifically, how might correspondence metadata from Lowell’s archive map professional relationships among modern poets, trace the lifecycle of poems, from drafts to publication, and support feminist recovery work by demonstrating the centrality of an overlooked literary figure?

Over the past year Bradshaw and a team of graduate students in Digital Humanities and English here at Loyola University Chicago have worked to develop the infrastructure for ALLP. They have transcribed hundreds of Lowell’s letters from facsimile to text, written the TEI header, designed encoding guidelines and a work flow, encoded sample letters, created a site index, and built a wire frame. (Encoding guidelines, work flow, wire frame, and metadata spreadsheets are on the ALLP GitHub site.) This grant will allow Bradshaw and her team to continue editing, annotating, and encoding Lowell’s letters.