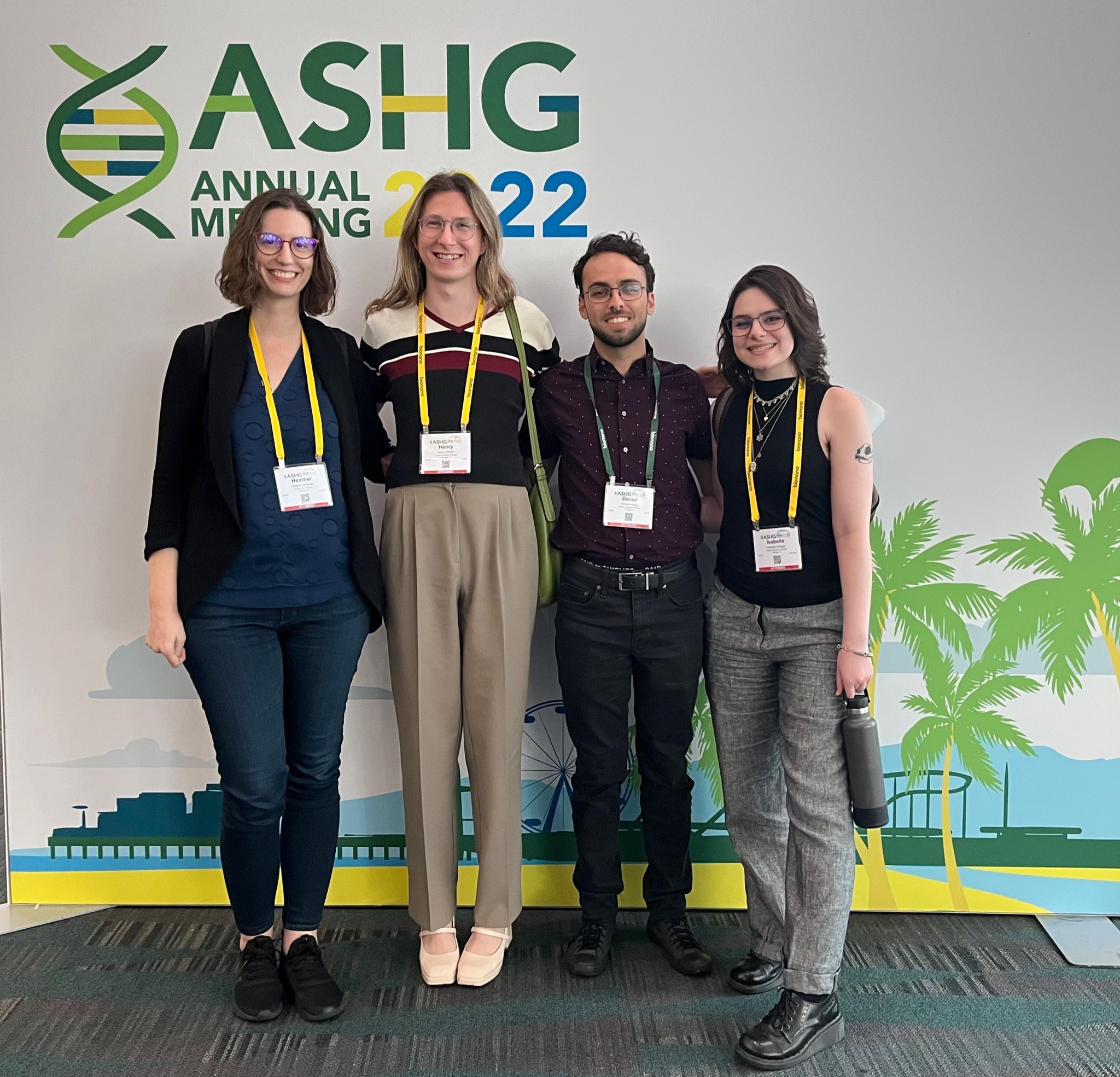 Over 7,000 researchers attended the October 25-29 American Society of Human Genetics (ASHG) conference in Los Angeles, CA, including two of Loyola’s MS Bioinformatics students, Daniel Araujo and Henry Wittich, who were both selected to give platform presentations at the meeting. This was the first time in three years that the meeting could be held in person, and of the over 2,800 abstracts submitted, only the top-scoring 333 were selected to give a platform talk. “I was nervous up until the moment I got on stage, then I just felt ready,” said Daniel about his talk, titled, “Multivariate adaptive shrinkage improves cross-population transcriptome prediction for TWAS in underrepresented populations.” His work involves creating models that better predict gene expression levels across diverse ancestral populations, as most of the models publicly available nowadays are built on data of individuals of European descent. After his talk, he had the opportunity to speak with attendees, including professors from different universities. “It was a valuable experience to show my work to other scientists, especially now that I’m thinking about applying to PhD programs outside of Loyola.” While Henry was also very nervous for his talk, he felt extra prepared after presenting at the 2022 Cohorts for Heart and Aging Research in Genomic Epidemiology meeting in Seattle two weeks before ASHG: “before my talk, I kept reminding myself that I knew what I was talking about, and that I had practiced my presentation many times, and it paid off in the end.” His presentation, titled, “Performing TWAS on proteomic data to understand cis and trans gene regulatory mechanisms underlying complex traits,” was about associating predicted gene expression with measured protein levels to discover regulatory relationships between genes. During the Q&A portion of his talk, Henry received many suggestions about future analyses he could perform. “I got some great ideas from the audience members and the other presenters in my session, and I’m excited to explore these new directions in my research once I get back to Chicago.”

Both Daniel and Henry are members of Dr. Heather Wheeler’s research lab, which mainly focuses on studying human populations and the relationship between genetic variation and complex traits. Also at this year’s ASHG conference, Dr. Wheeler was an inaugural winner of the Human Genetics and Genomics Advances' (HGGA) Early-Career Investigator Award for outstanding contributions to the field made by young investigators who have no more than five years of leading a research group at the time of acceptance. The award winning paper, Transcriptome prediction performance across machine learning models and diverse ancestries, included Loyola graduate Paul Okoro (MS Bioinformatics ‘20) as first author and Dr. Wheeler as last author. “It is wonderful to be recognized by my fellow human geneticists and am grateful to all my collaborators and the participants who made this research possible,” remarked Dr. Wheeler. “I am also grateful to share the ASHG experience with outstanding lab members, who represent the next generation of scientists and have a bright future.”

When asked about his experience at the conference, Henry commented, “Being at ASHG, it was exciting seeing how our work fits into the field, and how the research that we conduct has implications on the future of medicine.” Overall, Daniel and Henry were very satisfied with the conference, and grateful they could attend it, with financial support from the Loyola Graduate School travel award and Dr. Wheeler’s NIH R15 grant. Getting invited to give a talk at ASHG was a great honor to both Daniel and Henry, and following the conference, they are both invigorated to conclude their thesis work and move forward with their respective career goals.