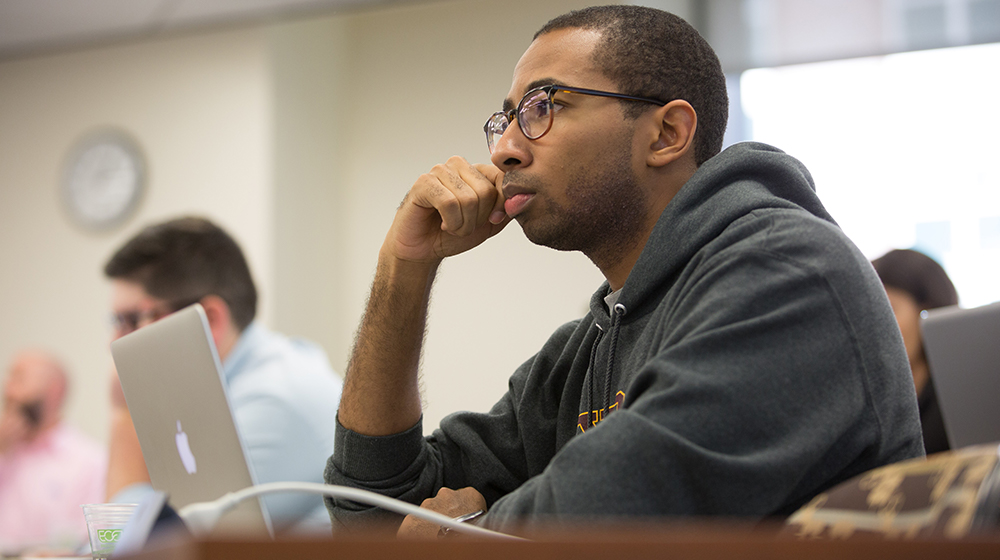 With two demanding jobs—Illinois state representative for the 26th district and executive director of the Democratic Party of Illinois—Christian Mitchell needed an ultra-flexible program when he decided to study law. “In addition to the six months the Illinois General Assembly is in daily legislative session in Springfield, there’s a ton of reading, drafting, and constituent work, which would have made a traditional evening program impossible,” he says. “Loyola’s innovative Weekend JD program is the only way I could have made law school work.”

LEGACY OF LEADERSHIP: Besides being attracted to the Weekend JD’s flexibility, “I chose Loyola because its legacy of training future leaders is peerless in Chicago,” Mitchell says. “One of my mentors, Illinois Attorney General Lisa Madigan, is an alum. So is the former managing partner of Winston and Strawn. So are the legislative leaders of both chambers of the General Assembly.”

FAVORITE PROFS: Dean Michael Kaufman and Professor Nadia Sawicki were the first two professors Mitchell had in the weekend program—“and they both made an indelible impression on me,” he says. “Dean Kaufman’s energy and ability to make details exciting and memorable is incredible. Professor Sawicki is brilliant, tough, and sets the standard for loving the law and taking it seriously.

‘I deal with constitutional law and its interaction with state law and jurisdiction every day as an elected official.

DUAL AREAS OF INTEREST: Mitchell is intrigued by both constitutional and health law. “I deal with constitutional law and its interaction with state law and jurisdiction every day as an elected official,” he says. “And, in my work with the state Democratic party, I know that election law is effectively a subset of constitutional law, and incredibly important to our electoral process.” The son of a longtime nurse and nursing administrator, Mitchell has four hospitals in his legislative district. “Health care comprises 18 percent of our economy,” he notes. “The legal challenges of integrating new technology and managing risk in order to deliver better health care to more people are exciting to me.”

INSPIRED BY THE GREATS: Both historical figures and lawyers in his own life serve as inspiration for Mitchell. “A dogged trial attorney overturned my own aunt’s wrongful conviction,” he says. “My interest in law and politics comes partly from the actions of legendary lawyers like Charles Hamilton Houston and Thurgood Marshall. Folks like the Equal Justice Initiative’s Bryan Stevenson and the ‘O’Hare Lawyers,’ who assisted airline passengers detained in the first days of the Trump administration’s travel ban, are modern-day heroes.”

HOLDING THE LINE FOR JUSTICE: “I believe that good lawyers—especially in an adversarial system with so much common law—are among the most important citizens in a democratic society,” Mitchell says. “They serve as business leaders, politicians, and advocates. They are often the line between justice and injustice. We need more of them.” (August 2018)

Learn more about our Weekend JD program, which is designed for working professionals.

number of weekends each semester the JD program meets