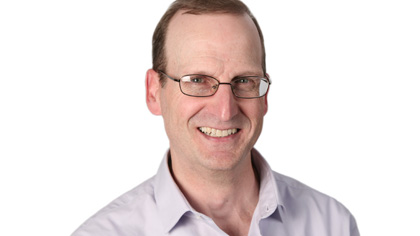 Professor Jim Calcagno has developed one of the first online courses available as part of TED’s new Ted Studies series. Dr. Calcagno’s 2012 Evolutionary Anthropology article “What Makes Us Human” served as the inspiration for the course, which features a set of curated talks on evolution from experts such as Jane Goodall.

The TED studies program seeks to utilize the organization’s existing talks by pairing them with learning modules that ask listeners key questions and terms from the talks. The organization has commissioned experts from around the world to develop these lesson plans.

Dr. Calcagno’s course explores humanity’s evolutionary history and possible future by presenting a set of talks from experts in anthropology and related fields that discuss subjects including skin color, moral behavior in animals, as well as technological advances helping us better understand evolution.

Dr. Calcagno said that when asked to create the course on evolution, he kept the theme “what makes us human” in mind as a focal point.

“It’s one of the most fundamental questions of anthropology,” Dr. Calcagno said, “but it’s one that researchers generally avoid because it’s such a big question. As my career progressed, I wanted to return to this basic question.”

This theme was also the focus of his 2012 article for Evolutionary Anthropology. For two years that publication has remained the top downloaded article in the journal for two years, which has the second highest impact factor of 81 anthropology journals.

Dr. Calcagno collaborated with 17 of his undergraduate students to develop learning modules for each of 8 presentations in the course. His students were responsible for reviewing several talks to pinpoint key terms and questions, as well as find supplemental readings. These students will be acknowledged by TED for their contribution.

“It put these students on the other side of the desk,” Dr. Calcagno said of their project. “Instead of answering questions, they were responsible for creating them, and providing the resources to find the answers. I think it gave them a new appreciation for how challenging that can be.”