The Future of Women at Work 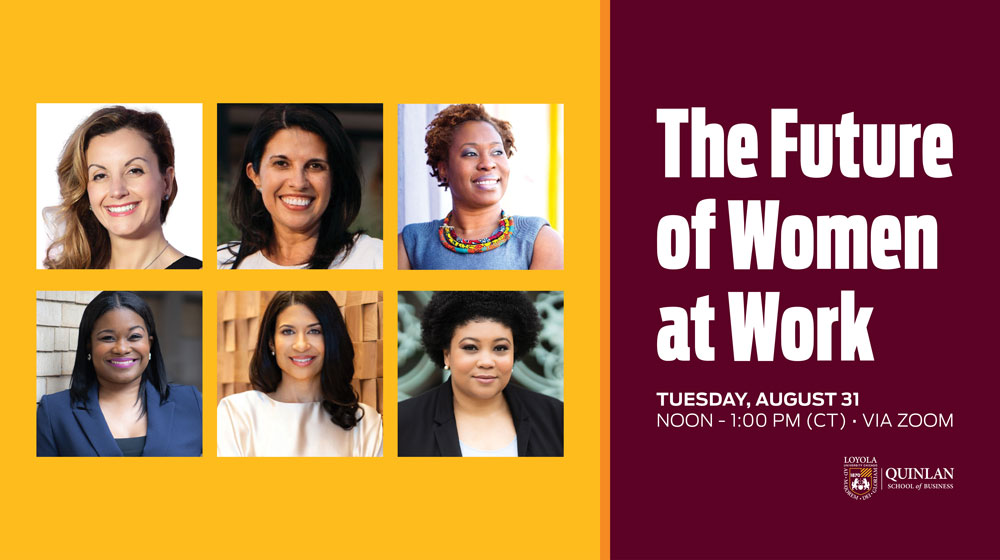 The United States is currently seeing some of the highest unemployment rates for women since the 1980’s, resulting in an estimated $64 billion  in lost wages and economic activity.

The workforce is experiencing what many are calling “The Great Resignation,” as the pandemic has caused 2/3 of US employees to reevaluate their purpose in life. Over half of those participating in the Great Resignation identify as women.

In search of answers, the Baumhart Center called upon Dr. Linda Tuncay Zayer, Ph.D., Quinlan School of Business, Loyola University Chicago, Lourdes Gonzalez of Workday, Carla Madeline Kupe of YWCA Metro Chicago, Tiara Muse of Koya Partners, and Nicole Johnson-Scales of Design Your Professional Joy for a panel conversation on the current work environment for women and what the future may hold.

With remote learning being the reality for many this past year, parents — specifically mothers — spent an increased amount of time caring for their children. “In heterosexual partnerships with both parents working, mothers with children under 12 had reduced their paid working hours four to five times as much as fathers,” Zayer explains. “Inegalitarian divisions of pandemic parenting were commonplace as couples relied on default gender stereotypes of men as the breadwinners and women as caregivers.”

Yet, as the world returns to “business as usual” and children go back to school, some mothers (and women in general) aren’t rushing to return to the office.

Muse believes some women may find an advantage in staying fully remote.

“There is an expansion of acceptance of remote work. Not that it’s preferred, but it surely does offer opportunities for women that want to take on leadership roles…So, maybe you’re based in Chicago, but there’s an opportunity based in DC that will allow you to be an Executive Director or in a leadership position where you truly can expand your reach.”

Muse gives the example of single mothers who may in the past have turned down opportunities because they didn’t want to move their children, “now you really do have the flexibility…to look at jobs in a completely different way.”

But for women that do want to return to the office, there is still some hesitancy.

“This pandemic has been a reset button globally and, in this country, for ourselves as individuals but also professionals…Coming back to the office for a lot of us, including women who like me identify as Black, and those who have been historically and systemically marginalized and underrepresented…why would I go back?” Kupe poses. “It’s up to the employers now to show that when you come back, things will be different.”

Gonzalez agrees, calling for employers to “rethink the employee experience.”

“Think about your audience,” says Gonzalez. “Are you starting with an 8 a.m. meeting knowing that many of the folks joining are caregivers? Could you move that meeting to later? If you start doing that, others will follow, and then organizations will recognize those behaviors of inclusion. The impact is phenomenal and it’s contagious.”

While Johnson-Scales agrees that employers have the responsibility to change workplace culture, she also believes, “we have the ability to proactively pursue the things that we want.”

Johnson-Scales participated in the Great Resignation herself, leaving her corporate job of almost twenty years because she decided she wanted something different – something that deeply aligned with her unique purpose.

“The workplace was created and designed for men. That structure didn’t work for women before the pandemic, and it blew up during the pandemic…This moment in time gives us the opportunity to create the future of work by getting in the driver’s seat of our careers.”

“What it takes, is us to say ‘enough.’ Enough to the things that don’t bring us joy. Enough to work environments that don’t support us. Enough to doing work we don’t love.”

She acknowledges, though, that for some women, saying “enough” isn’t always easy, but “we’ve got to recognize that we have the power to change all of these things…we have to have confidence in ourselves to create the change that we want to see.”

Watch the full conversation on The Future of Women at Work here.