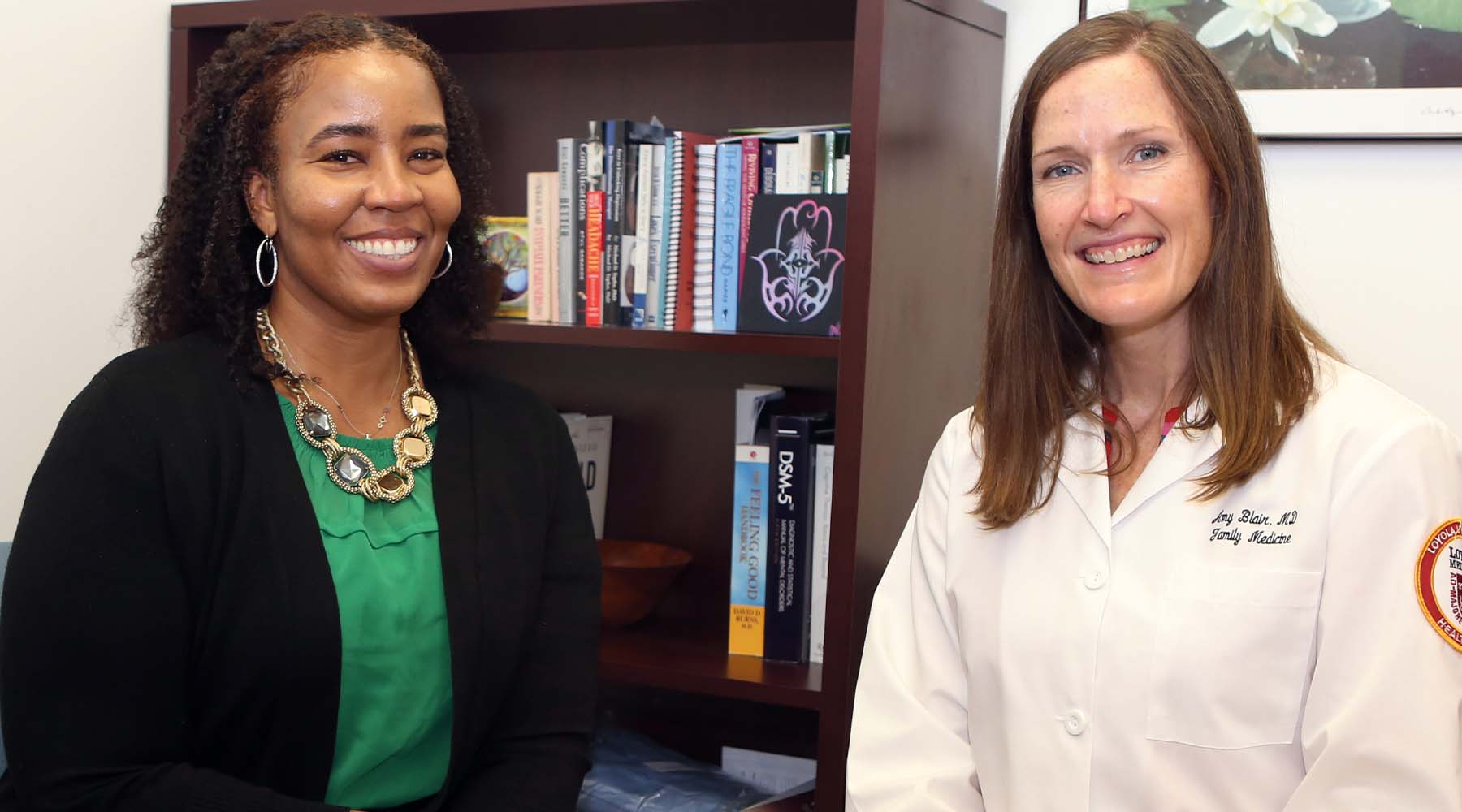 Maya Watson, LLM, director of the Maywood MLP, and Amy Blair, MD, partner to serve clients with a wide range of interrelated medical and legal needs.

A client referred to Loyola University Chicago’s new Maywood Medical-Legal Partnership (MLP) in February had an array of interlocking issues threatening his health. The man, who has physical disabilities, hadn’t had running water in his home for five years. His other utilities were on the verge of being shut off. Although he owned his home, he couldn’t afford his property taxes and was in danger of losing his residence.

“Our medical partners couldn’t fix all of this,” says Maya Watson, LLM, director of the Maywood MLP. “We were able to advise him on ways to address his delinquent property taxes and access funds to have his water turned on and make his other utilities current,” she says. “It took our whole team to assist him with the various issues he faced.”

The MLP in Maywood, Illinois, builds on the success of the School of Law’s Health Justice Project (HJP), an MLP that supports underserved clients and provides hands-on experience to Loyola law students. With referrals from Legal Aid Chicago, the HJP assists patients of the Erie Family Health Centers on Chicago’s Near West and North sides and in the northern suburbs.

Many residents of Chicago’s West Side and western suburbs also face a wide variety of health-harming legal needs and systemic barriers to health—so this year the Health Justice Project extended its reach by creating the Maywood MLP, an interdisciplinary partnership between the HJP, Loyola Medicine, and Loyola’s Stritch School of Medicine.

“Health outcomes can be impacted more by things happening outside the hospital or clinic than inside it,” says Amy Blair, MD, Loyola associate professor of family medicine and director of the Stritch School of Medicine’s Center for Community and Global Health. In her 15 years as a primary care physician, “it became clear to me that we needed to work with other disciplines,” she says. “So many of our patients need legal advocates to change their social and economic context.”

Blair, the MLP’s medical champion, continues, “In primary care, we see the patient’s big picture and make referrals if there’s medical expertise needed in cardiology, neurology, or another area. That’s the same thing we’re doing with the Maywood MLP. As health care providers, we do what we know we can to facilitate a healthy outcome, but we turn to our partners for help in other arenas that are crucial to our patients getting better.”

The MLP in Maywood builds on the success of the School of Law’s Health Justice Project (HJP), an MLP that supports underserved clients and provides hands-on experience to Loyola law students.

Most referrals to the Maywood MLP come from the Loyola Center for Health in Maywood, whose population is predominantly African American. The MLP also serves patients of the Loyola Center for Health in Elmwood Park; Gottlieb Memorial Hospital in Melrose Park; MacNeal Hospital in Berwyn; and the School-Based Health Center at Proviso East High School in Maywood.

Watson and her team work on many of the same issues as those addressed by the Health Justice Project: public benefits, disability, education, housing, and family law, but Maywood MLP’s clients also face some distinct challenges.

“For instance, water pricing in Maywood is a big issue,” Watson says. “In fall 2020, water shutoff notices were sent to about 10 percent of the town’s population. That was appalling to us, because outside of water being part of people’s daily needs, we were in the midst of a global pandemic and needed to maintain basic levels of sanitation.”

Maywood and nearby suburbs also were hit particularly hard by COVID-19, which has disproportionately affected communities of color and low-income individuals. The Health Justice Project has been an active participant in the COVID Equity Response Collaborative: Loyola (CERCL), an interdisciplinary team of law, public health, medicine, nursing, and social work students and professionals who have worked to reduce the harm from COVID to at-risk populations in Maywood and surrounding communities in nearby western suburbs of Chicago. CERCL’s activities have included testing, contact tracing, and providing support to quarantined individuals and those whose employers are not minimizing risk to their employees.

of Loyola Law students have an interest in health law 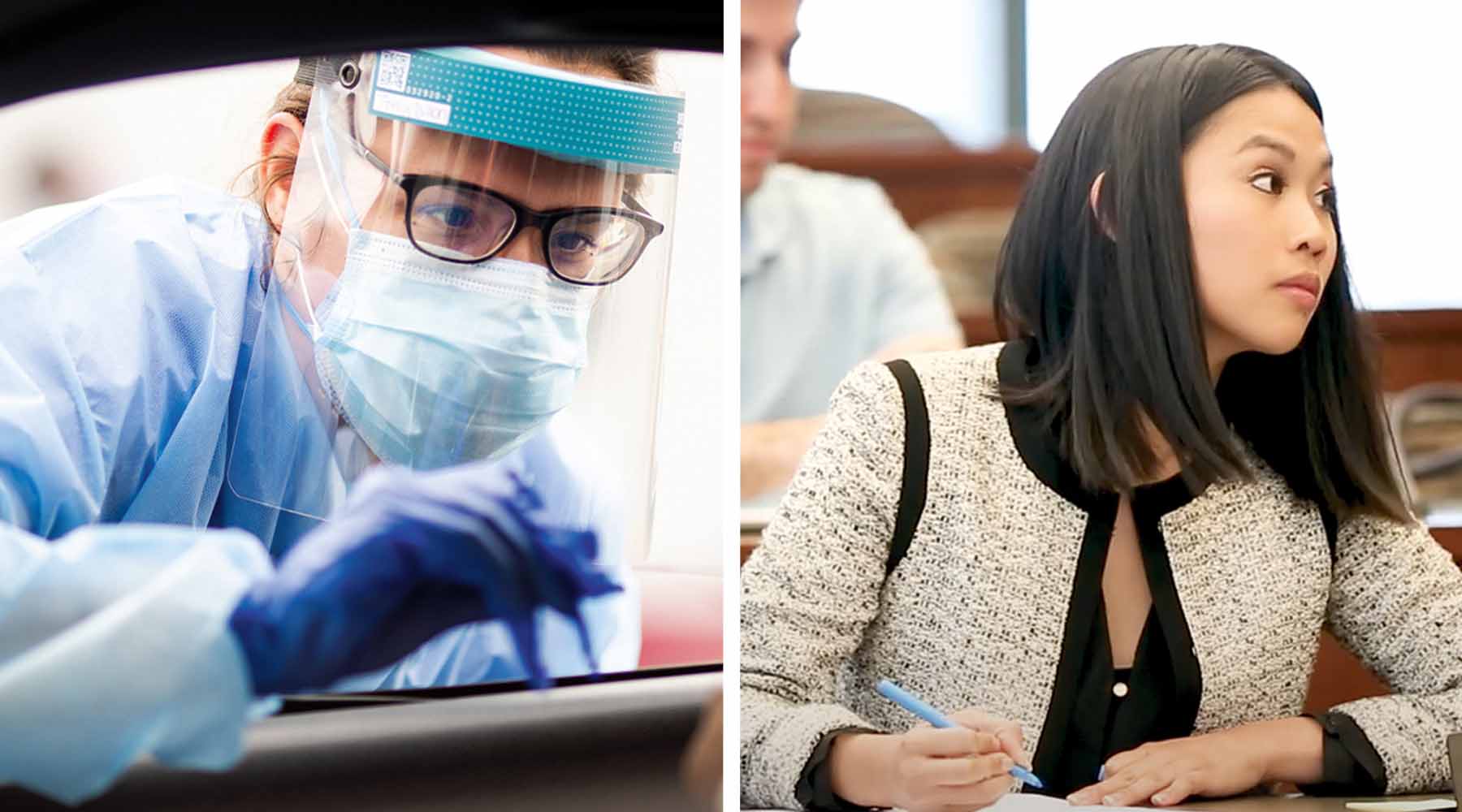 Loyola University Chicago provides free medical services to the Maywood community and Loyola law students use their classroom learning to tackle real-world challenges at the Beazley Institute for Health Law and Policy.

As part of the MLP collaboration, Watson serves one day per week in the clinic at the Loyola Center for Health on Roosevelt in Maywood. “That really helps with in-person communication and gives the health care providers opportunities to ask her opinion,” says Amy Blair, MD. Blair created a survey identifying key legal and social issues facing area physicians’ patients and has led the effort to educate local health care providers on the MLP’s services.

Beyond handling direct patient referrals, the Maywood MLP works on policy issues, which is invaluable to health care providers, Blair says. “I’m less of a direct participant in that kind of work,” she says, “but knowing that someone is looking at the high cost of water rates in Maywood, for example, makes me a better doctor.”

“Learning the law from a book or seminar is one thing, but working with a real client with real issues brings so much more richness to legal education,” Watson says. “Clinical experiences are key to legal education, and our Weekend JD students deserve that opportunity. –Gail Mansfield (December 2021)