Ready for his close-up 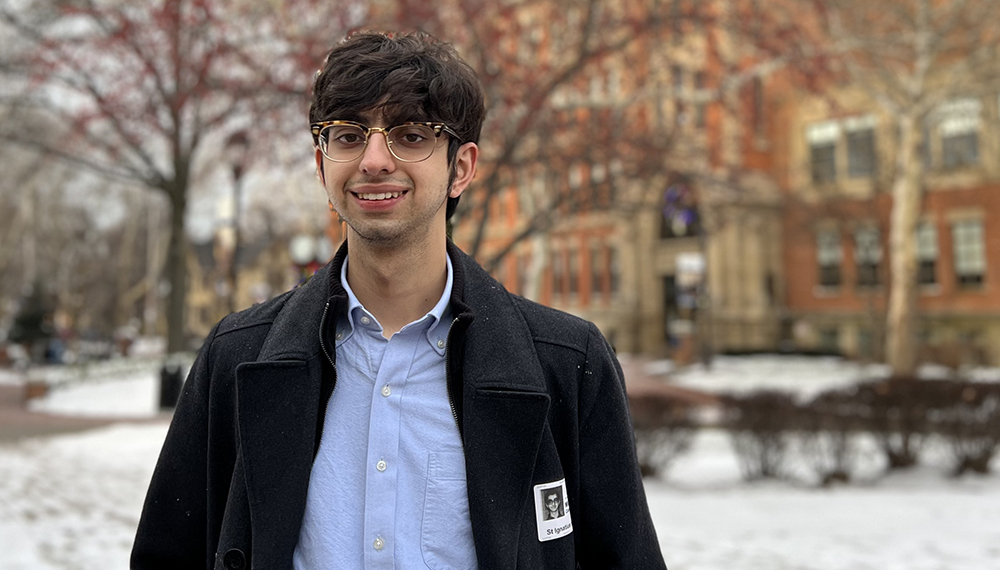 Michael Chopra, a sophomore Film and Digital Media student, will be appearing this fall in a new Netflix film

Michael Chopra, a sophomore Film and Digital Media student, will be appearing this fall in a new Netflix film by two-time Academy Award-nominated director Noah Baumbach. The film is an adaptation of Don DeLillo’s 1985 comedic breakout novel White Noise, a post-modern work dealing with everyday worries and existential fears. Chopra was cast as a college student, a role fitting to his real life experience. Before he knew it, he was called back and got to spend even more time working both on screen and behind the scenes. Below is an edited interview with Chopra.

You got word that you had been chosen for the film. What happened next?

I got the email in May 2021. It was a background role, playing a college student, and I thought it was the perfect opportunity. I got accepted, and the director liked the way that I looked, so he chose me for a more featured role. I went in June for my first day on set as a background character. It was a cool experience being on set. After that there was another email for the same production that said they were looking for a student with camera and on-camera experience. I had a video I made in Professor John Goheen’s class. It was shot and directed by me, and I was also an actor in it. I sent that in, and the casting director told me that I was selected to do that role. I was selected for a role playing a videographer. I was on set for two days for this role. The scene was supposed to be me filming something. I was given a 1980s camera to operate, because the movie is set in the 1980s. The director, Noah Baumbach, gave me instructions on how to operate it and what to do in the scene.

Can you tell me about your experience in Professor Goheen’s class, COMM 135?

I took Intro to Video Production with Professor Goheen. I was very impressed with the class because of how clear-cut it was. It wasn’t too advanced on video production, just teaching the basics. Each concept that we learned applied to the next assignment. I learned how to edit footage and create a short narrative for interviews. The foundation of my experience in creating videos and editing them came from that class. I still use the practices I learned in that class in my current student worker job. I’m a student videographer in the Department of Fine and Performing Arts in the Mundelein Center.

How did you go from being a background character to a more identifiable role in the film?

They sent an email to a few of the background actors that they wanted to come back. I flew back on a weekend in September. They were doing a scene with college students, and they wanted a few of us to speak to create more of an ambience in the film. The director wanted me to have a line in the film, and I think it was because he recognized me from working with him a month prior. He told me my line to say, and it had to do with things relating to being a college student. And at that point, I was technically upgraded to a cast member.

Did that upgrade carry any privileges?

Yes, it meant I got my name in the credits of the movie. And a pay upgrade!

As a Film and Digital Media major, do you feel more interested in being an actor in front of the camera, or being a creator behind the camera?

Initially, I wanted to be an actor. But at the same time, the production part enthralls me as well. I’ve been making little films since I was a kid. I started with Lego Stop Motion. I was really glad to be on set, because not only was I performing, I was seeing the process of moviemaking. Interacting with the director and sound people.

Did you feel intimidated at all on set?

I’ve wanted to get into film for a while now, since high school. I always knew that I would have to be comfortable with uncomfortable situations. People have to be able to see you if you want to go anywhere with it. Even in the background, I made sure that I was at the front of the lines, to make sure that people would see me. I was nervous, but I knew I had to move past it to be able to be successful, and I think that it worked. And luck too, that the director liked me.

What was it like working with Academy Award-nominated director Noah Baumbach?

He was a really genuinely nice person. The fact that he wanted college students specifically to play an active role, like the scene with the video camera, was very significant I think. It shows his openness to bringing people in.

Do you see this as a jumping-off point for your future career?

I do hope so. Noah was introducing me to the props guy, and he said, “This is Michael Chopra, he’s been with us throughout the duration of the film.” I also talked to the editor, he knew my name too. I think this is just getting myself out there. You have to show up and be seen in this industry. The fact that they wanted me to come back so many times showed me that I demonstrated my abilities to them. I can now say that I have experience on a film set if I’m applying somewhere. And I can say I’ve worked with Noah Baumbach. I’m very grateful for it, and I’m grateful for Noah’s kindness. If he didn’t care, I wouldn’t be here—but he cared.

That’s such an exciting experience with a talented director. What’s next for you? Do you have any internships lined up?

I’m going to be taking the Storytelling for Film and TV class, and I’m going to continue my job as a student videographer for the marketing department of Fine and Performing Arts. We’re making a one minute and thirty second promotional video for the department. I also applied to a Viacom internship for next summer. I actually met an alumna from Viacom at the SOC, the Dean introduced us. It’s really nice that our Film and Digital Media program really understands that getting a job in film is challenging, but they do a good job of helping people. The SOC Careers website helps, and the desire to help from the Dean and others is really encouraging. I took a class with Christopher Batte, Intro to Audio Production, COMM 130. He owns a film production company, and a lot of the stuff that he was talking about in class throughout the semester are things I actually saw on set in the movie I was in. It was a really cool experience being in the classroom and having been involved in the film industry itself. It was a really nice dynamic.