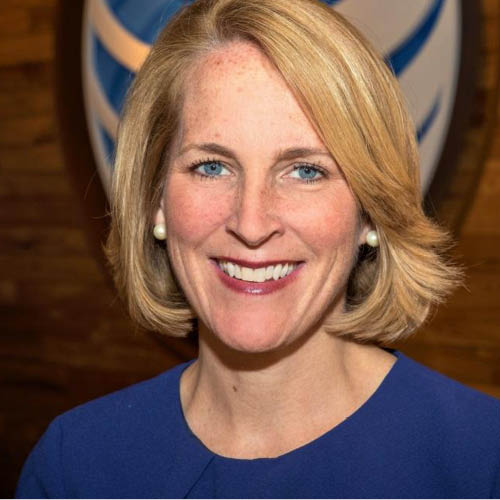 Eileen Mitchell is the president of AT&T Illinois, one of the state’s largest private employers. Mitchell is responsible for the company’s public policy, philanthropy and community relations initiatives in Chicago and throughout the state. She was appointed to the position effective December 1, 2018.

Eileen joined the company in 2003 and, as vice president of external affairs, led team campaigns to achieve numerous public policy objectives in Illinois. She also served in an expanded role as lead strategist and coordinator of designated AT&T legislative campaigns and initiatives in other states. Eileen directed planning and implementation of AT&T’s charitable giving and community relations initiatives in Chicago and across Illinois. After departing for public service in 2015, she rejoined AT&T in May 2017.

In 2018, Eileen was instrumental in the development of the company’s Believe Chicago℠ employee-inspired initiative, designed to help improve lives and lift 19 Chicago neighborhoods most affected by gun violence and high unemployment.

In 1992, she began her public service career in the office of Illinois Speaker of the House Michael J. Madigan. In 2015, after 12 years at AT&T, Eileen returned to public service to serve as the chief of staff in the Office of Chicago Mayor Rahm Emanuel.

As a volunteer, Eileen worked with Cardinal Blase Cupich to develop the Office of Violence Prevention for the Archdiocese of Chicago, and she currently serves as a volunteer for Misericordia and Marillac St. Vincent Family Services.

Born and raised in the Rogers Park neighborhood of Chicago, she is a graduate of Loyola University. Eileen and her husband, Jim, are the proud parents of three children, Bridget, Jack and Martin. They live in Chicago.