Why is there an angel on our webpage? 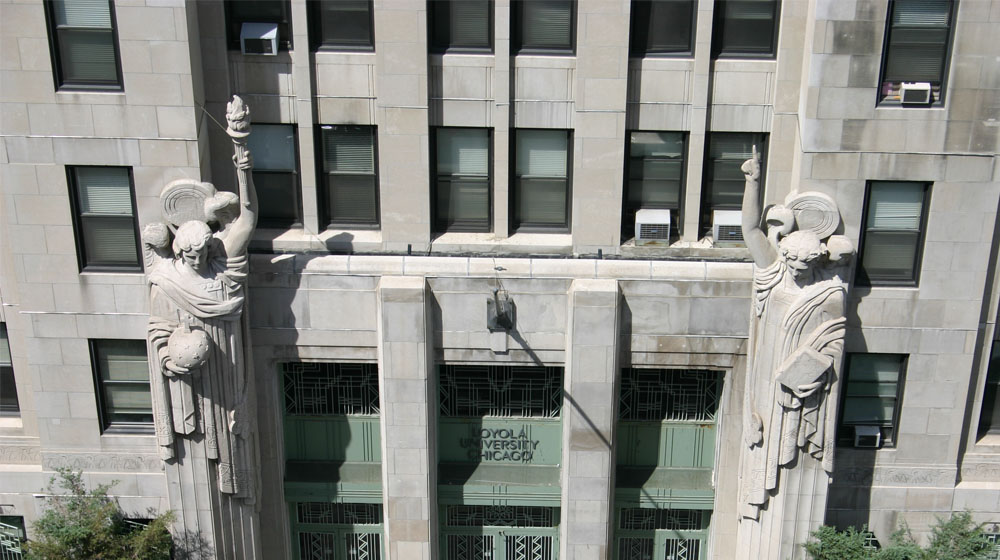 Flanking the entrance to the historic Mundelein Skyscraper, the four-story high stone angels, Uriel and Jophiel, are fitting guardians for what is now the Mundelein Center on Loyola University’s Lake Shore Campus. On the east side of the entry, the archangel Uriel holds the Book of Wisdom in his left hand while pointing with his right to a cross on the façade of the fourteenth story. His name means literally “light of God” or “flame of God,” and he is an icon of both wisdom and forgiveness. On the west side of the entry, the angel Jophiel lifts the torch of knowledge in his left hand and in his right bears the globe anchored by a cross. As the “Beauty of God,” Jophiel is known as the Remunerator who guarded the tree of knowledge in Eden and is the protector of those who seek truth.

These enormous guardian angels are representative of the virtues of education and culture emphasized by the founders of Mundelein College. Construction of the Mundelein Skyscraper began in 1929 with the intention that it would serve as the sole building of the self-contained college. Though more buildings were eventually added to the campus, for many years the Skyscraper served as the main building of Mundelein College. Made of limestone, these elegant and sleek figures have hand-carved bases while their more elaborate upper portions are molded. Today the guardian angels still serve as sentinels and icons for the learning, discovery, and wisdom that Loyola students strive for.

The Women and Leadership Archives was originally created to hold the records for Mundelein College and part of its mission is to keep the spirit of Mundelein ignited. Uriel and Jophiel serve as reminders of the role that Mundelein played in the strengthening of women’s education and leadership; we display a picture of them on our website to continue this legacy.