The creation of the Gannon Center is tied to the history of Mundelein College, a Catholic liberal arts college for women on Chicago’s north side. Established in 1930 by the Sisters of Charity of the Blessed Virgin Mary (BVMs), Mundelein College provided a comprehensive education focused on encouraging women to be leaders in all career fields and in their communities. After 60 years, declining enrollment and financial challenges compelled Mundelein to seek an affiliation with neighboring Loyola University Chicago. Since the affiliation in 1991, the legacy of Mundelein and its remarkable leaders lives on at Loyola in the form of its innovative programs, iconic architecture, and the Gannon Center for Women and Leadership.

Sister Carolyn Farrell, BVM is appointed to lead the institution through the affiliation process as the last president of Mundelein College. Sister Carolyn Farrell, BVM, forms a committee to lead efforts to create a center on Loyola’s campus to keep alive the spirit of Mundelein and continue its commitment to women’s education and leadership. Initial members of the planning committee included Ellen Waite, Barbara Bardes, Ph.D., Kathleen McCourt, Ph.D. and Linda Deanne, Ph.D. From the beginning, Sister Carolyn Farrell, BVM, intends to name the center after Sister Ann Ida Gannon, BVM, the respected and beloved president of Mundelein College from 1957-1975. Sister Ann Ida Gannon, BVM, also plays a significant role in establishing the Center and the Mundelein Archives.

1992: Dennis Keller, Chief Executive Officer at DeVry University, becomes an advisor and donor to the Gannon Center out of gratitude for past assistance from Sister Ann Ida Gannon. With Keller’s help, the committee set up an endowment that allowed them to move forward in setting up the center.

1993: A celebration and reception in honor of Sister Ann Ida Gannon, BVM, is held on May 25, 1993 sponsored by Dennis Keller. At the event, Keller officially announces the creation of the Ann Ida Gannon, BVM, Center for Women and Leadership. The Center is initially described as “both a space and a concept” that includes Loyola University Women’s Studies program, the Mundelein College archives and heritage room, the Women’s Conference, the Women and Peace Program, a Scholar-in-Residence Program, the Gannon Scholars program, and a variety of other scholarship and mentorship activities. The plans propose using space on the second floor of the Skyscraper to house the new center.

Gannon Scholars: The longest running program supported by the Gannon Center is the Gannon Scholars Leadership Program. The first Gannon Leadership Scholarships were awarded in 1984 at Mundelein College. The four-year progressive program provides scholarships and engages students in the development of leadership, service, and research. Each year, 10 incoming first-year women are selected for the prestigious program and join the peer community dedicated to personal growth, academic excellence, and commitment to social justice. 159 “Gannons” have participated in the program at Loyola University Chicago and previously at Mundelein College.

1993: The Women in Science Enabling Research (WISER) internship program is created to offer undergraduate women an introduction to laboratory research and encourage women to pursue careers in the sciences. 83 student interns have participated in the program under the guidance of 27 faculty mentors.

1994: The Women and Leadership Archives (WLA) officially opens within the Gannon Center. By July 1995, shelving and basic furnishings were in place for the WLA and up to forty individuals and organizations had pledged their papers to the fledging archives. Loyola University Assistant Archivist Valerie Browne devotes time to the WLA from the beginning and becomes the first Director/Archivist in 1996.

Students working with materials in the Women and Leadership Archives

1996: The Gannon Center becomes an official Loyola Institute with the ability to fundraise independently of the University.

The first Women in Business Conference is held by the Gannon Center. The conference seeks to heighten the leadership potential and skills of Chicago-area women in management.

1999: The Gannon Center meets its endowment goal of $3 million with the generous support of the BVMs, alumnae, and friends. Upon the death of Virginia Galvin Piper in June of 1999, the long-time benefactor of Mundelein and friend of Sister Ann Ida Gannon, BVM, bequests $200,000 to the project. The donation is used to evaluate and begin restoring Piper Hall, which becomes the new intended home for the Gannon Center. With the rededication in 2005, the historic mansion that had been named after Virginia’s late husband in 1975 was renamed the Kenneth M. and Virginia G. Piper Hall. 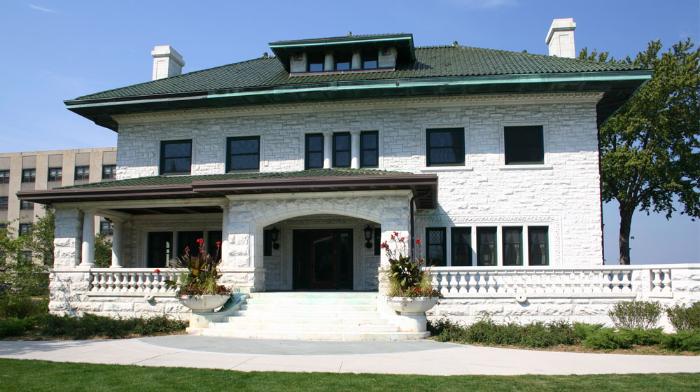 ‌2000: The Gannon Center creates a faculty fellows program for Loyola faculty. The fellowship supports faculty whose research focuses on women and leadership, advances the mission of the Gannon Center, and utilizes the resources at the WLA. There have been 30 Gannon Faculty Fellows.

2002: The first Coffey Award is presented to Tina Stretch (Class of 1966). Named for Sister Mary Justicia Coffey, BVM, the first president of Mundelein College, this annual award honors an alumna for her leadership in the community, accomplishments in industry, and service to others.

2005: The Gannon Center, now known as a Loyola University Center of Excellence, moves into the newly renovated Piper Hall along with the WLA and the Women’s Studies Program. The historic mansion remains the Gannon Center’s home today.

Susan Ross, Ph.D, a professor in Theology, is appointed as the new Director for the Gannon Center.

With a generous bequest from the Ann and Alvin Baum Family estate, the Gannon Center creates the Baum Speaker Series. The series focuses on bringing nationally and internationally recognized women to speak about issues at the intersection of women and leadership, public policy, and social justice. The Baum Speaker Series has featured 16 speakers.

2008: Dawn Harris becomes the Director of the Gannon Center.

2010: Janet W. Sisler becomes the Director of the Gannon Center.

2013: The Gannon Center unveils Mallinckrodt Scholars, a four-year scholarship and service program supporting undergraduate students. Created in collaboration with the Sisters of Christian Charity, the program is named for the religious order’s foundress, Mother Pauline von Mallinckrodt. The Mallinckrodt Scholars program honors the legacy of Mother Pauline by supporting students in looking beyond academic achievements and promote social justice as well as the collaborative developmental networks needed in order to improve social and moral conditions.

2014: The Carroll and Adelaide Johnson Scholarship Fund is created to offer students with demonstrated financial need with opportunities to conduct interdisciplinary research. Accepted students are mentored by a Loyola faculty member and conduct research on women and a social justice issue. The program has included 35 Johnson Scholars and 22 faculty mentors.

2018: With Gabrielle Buckley as its new Director, the Gannon Center celebrates 25 years of supporting women’s education and leadership at Loyola University Chicago.