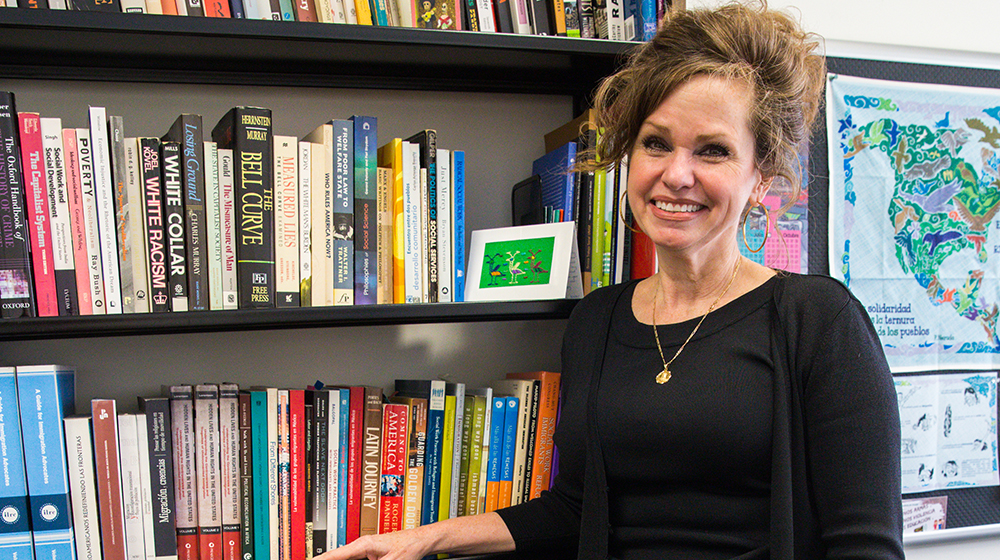 School of Social Work Professor Maria Vidal de Haymes, PhD, hit two milestones in 2017. This year marks her 25th year of teaching at Loyola as well as the honor of being named Faculty Member of the Year. She’s spent the past two decades teaching courses in the areas of social welfare policy, community organizing, and race and ethnicity as well as building relationships with Jesuit institutions across Mexico and Central America.

Learn about her contributions to Loyola and universities across the Americas in the interview below.

Tell me a little bit about your role when you started here 25 years ago.
I was hired pretty much straight out of graduate school to teach at Loyola. I spent one year at the University of Wisconsin in Milwaukee while I was finishing my dissertation. Loyola is where I cut my teeth teaching, and I’m still learning every day. I was initially hired to teach our social welfare policy and diversity courses as well as a community intervention course. That’s pretty much what I did up until about 10 years ago.

What changed 10 years ago?
There was a turn in focus to migration issues and that came out of my work with Jesuit Migrant Services. Maybe 11 or 12 years ago, there was a call from Fairfield University’s Father Rick Ryscavage, S.J., to Jesuit universities across the Americas. It invited the institutions to come together for a weekend seminar focused on leveraging Jesuit institutions of higher education and Jesuit refugee and migrant services to develop an opportunity for teaching, research, and service for migrants.

We were the only school of social work represented at that gathering. I went with one of our students at the time, Alejandro Olayo Mendez, S.J., who was a Jesuit scholastic at the time working on his master’s in social work. We were really moved by what we were hearing and energized and excited about the possibility of working with colleagues from across the Americas.

Father Valdés explained they were working on a certificate program in parishes along the Mexican migration corridor, which is one of the most heavily traveled migration corridors in the world. They were working with lay pastoral agents in these parishes who had made a commitment to studying the issue of migration and developing projects to tend to, address, or provide some sort of accompaniment to migrants.

This was a pretty significant commitment—it required the participants give up their weekends every other week for a year and a half. They invited folks from Jesuit universities across Mexico and us to develop the curriculum and teach the classes. They asked if we could bring a team to teach, so I went with Alejandro, Ivan Medina from the School of Social Work, alumnus Marta Arias, an immigration attorney with the Chicago Legal Clinic, and Bernadine Karge, a Dominican Sister. We all spent one to two months there and taught every day for eight hours.

What did you learn from the experience?
It was a super eye-opening experience. With the exception of Sister Bernadine, all of us were immigrants ourselves and social workers who had been working in immigrant communities. The work in these parishes revealed a huge blind spot. We realized how conditioned our understanding of migration had been. It was focused on migration from a country of destination: the United States.

We didn’t realize the impact of immigration in communities of origin and transit. Typically, we think of Mexico as a source country for migration, but the migration corridor has much more complicated dynamics.

What types of projects did you and Jesuit Migrant Services develop through this initiative?
Some of the parishes focused on creating mental health, self-help groups for the women who remained in Mexico while their husbands, sons, daughters, and fathers went north for work. There was depression, loneliness, anxiety—migratory loss from folks who were still there and out of reach in many ways. The Jesuit Migrant Services worked with the pastoral agents to start these groups. Other examples included shelters, soup kitchens for Central American migrants in transit, and programs to generate income for people to remain in place.

How did this all connect back to your work at Loyola?
I also started going to the Jesuit Migrant Services annual meeting. The first time I went, 11 years ago, I met Dr. Graciela Polanco who’s a psychologist at Universidad Iberoamericana in Mexico City, a Jesuit university. Between the two of us and with the help of Catholic Charities of the Archdiocese of Chicago, we started a two-way, fieldwork exchange for students. Now we’ve had more than 200 Iberoamericana and Loyola students participate in the exchange over the last 10 years, all working in migrant focused projects. Iberoamericana sends students year-round, usually about six students each semester, and they work on research projects with us as well as within different Catholic Charities’ programs. This gives the students an applied experience—experiential learning. At the School of Social Work, we also provide some academic accompaniment, and Jerry Overbeck, S.J. meets with the students once a month for a reflection. In turn, we get similar support for our students at Iberoamericana and now ITESO, the Jesuit university in Guadalajara.

We also received a grant from the Federal Department of Education and its counterparts in Mexico and Canada to develop a migration studies sub-specialization. Even though the grant has now ended, for the last eight years we’ve been hosting a two-week seminar in Mexico City with Iberoamericana and Jesuit Migrant Services of Mexico, under the direction of Arturo Garcia, S.J. More recently, we’ve added a spring break border immersion class with the Jesuit Kino Border Initiative. Another 200 plus students have participated in these programs.

What’s next for these programs?
We recently received a Plan 2020 grant to collaborate with the Center of the Human Rights of Children (CHRC). We jointly submitted for the grant with the CHRC, Ruth Gomberg-Muñoz in Anthropology, and some faculty from the Stritch School of Medicine. The goal is to take what we’re doing in migration studies and in these student exchanges and incorporate law and medical students so we can have more interprofessional courses and opportunities for research.

In this project, we are also working with our two Jesuit partner universities in Mexico, Iberoamericana and ITESO, to make the classes two-way. The goal is to create interdisciplinary and binational teams comprised of our students. We will provide an immersion experience in Mexico at the beginning of summer, then several months to work on projects collaboratively, and at the end of the summer, have an immersion experience in Chicago with an immigration institute. This will give students a broader idea of migration from the perspectives of source, transit, destination, and return migration.

What has kept you at Loyola so long?
Being at Loyola, I am inspired by the mission and my colleagues and students. It has also opened the door for me to work with colleagues at Jesuit institutions in Mexico, Central, and South America and given me a community not just for scholarship and teaching, but also for spiritual reflection and growth. In fact, the research project that I’m working on right now is analyzing data that we collected from interviews focused on the social and pastoral accompaniment of migrants by faith-inspired actors. We interviewed shelter workers, nuns and priests, volunteers, social workers who do work with migrants in Chicago and Mexico. All Catholic faith inspired actors and most are connected to Jesuit institutions and projects in the Americas.