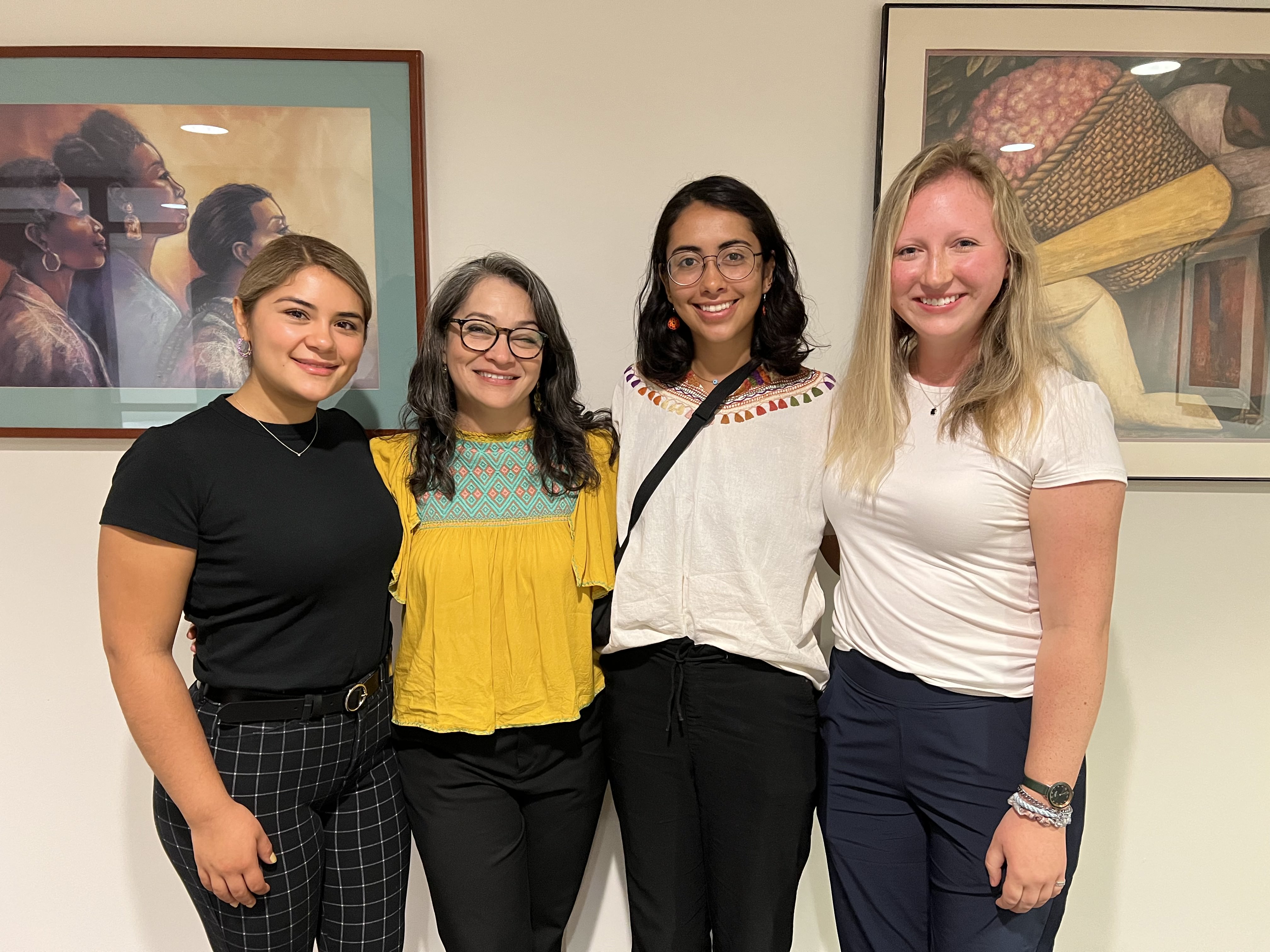 The community was naturally shaken and is still recovering from the events of that day. Dozens of volunteers rallied in response to the tragedy, including three bilingual Loyola School of Social Work students.

Director of Latino Affairs for Catholic Charities and Highland Park resident Cary Rositas-Sheftel was in charge of coordinating bilingual interpreters for a family assistance center (FAC) temporarily set up at Highland Park High School. She reached out to Loyola professor Maria Vidal de Haymes to see if any students were available to volunteer.

“I sent an email to Maria and 30 minutes later, one of the students told me, ‘I’m on my way.’ In the middle of the chaos, just to have that quick response and empathy from the students, it was incredible,” said Rositas-Sheftel. Two more students also joined the team.

Edith Reynaga, Camille Morhun, and Nohemi Rosales all chose to volunteer their time and skills to assist in the aftermath of the shooting. Reynaga just graduated with her MSW degree, and Morhun and Rosales each received their BSW and will complete their MSW degree in 2023.

The students joined other interpreters to greet Spanish-speaking individuals and families, guide them through the different resources that were available at the FAC, and accompany the clients through FBI interviews. In some cases, the interpreters even assisted during counseling sessions to help clients process the recent events.

“My training as a social worker helped me understand the impacts of this trauma and what different symptoms might look like,” said Morhun. “I also was able to advocate on their behalf with a counselor or with different agents at the tables. So, I was super grateful to be able to use my education to support this population.”

The volunteers spent over a week helping out at the FAC. During that time, more than 1,200 clients passed through the center, who were offered resources like mental health counseling, crime victims compensation applications, legal counsel from attorneys, and more.

Reynaga related the experience of working with victims of trauma to one of her internships she completed through the School of Social Work.

“I did a social justice internship at Catholic Charities in the immigration/naturalization program working with domestic violence survivors,” she said. “It reminded me of that experience because you take something very traumatizing that happens, and you use that as an advocacy piece to empower them. So even though it was really difficult for them to share these experiences, you tell them, ‘I know this is really hard that this happened to you but here are all these resources and everyone is here to help you.’ So it was using this very difficult situation to empower them to receive these services.”

Rositas-Sheftel said there were unique challenges to working with this population that were alleviated by the bilingual volunteers.

“In a mass shooting, the common feeling is fear of what happened,” she said. “But in the case of our immigrant community, because some of them are undocumented, there was also a fear about what would happen to them, if they came to seek help. So when the students were there, they knew how to make families feel welcome. They knew how to support them. So that was an added asset that they brought.”

Rositas-Sheftel said there was more inherent trust between them and the Spanish-speaking clients once they began speaking in their native language. The student volunteers agreed and said it was something they felt particularly prepared for thanks to their education at Loyola.

“There were various classes I took at SSW specifically focusing on the immigrant community and that’s helped me understand how to work with Latinx immigrants, which is primarily who we were working with,” said Rosales. “As a Latinx immigrant myself, I already had that understanding, but through Loyola’s coursework, it gave me a more professional lens in how to work with that population.”

The Importance of Bilingual Social Work

Vidal de Haymes has helped build the growing bilingual student population within the School of Social Work. She said she was extremely proud of these three students and they are examples of the many

“They were able to step into a situation like that and have the tools to respond to people,” she said. “And then on a human level, just the commitment I see in them. I’m really proud of the school adding this migration studies track. It supports and encourages the development of bilingual social workers.”

Rositas-Sheftel agreed that more bilingual social workers are needed in many communities across the country. She said the response from the community to these three students and the other volunteer interpreters shows the importance of having trauma-informed bilingual professionals.

“It will change the lives of all the people at the parade, but also the whole community, she said. “It’s very important to have this kind of support to help families in the healing process, and in the process of seeking justice for the victims. Having bilingual and bicultural services allows the people who came for these services to feel that they are welcome, they are understood, and they have nothing to fear. Because there is someone there who speaks the same language and looks the same as them and that there is someone to be their voice.”