THE PROMISE OF PEACE IN THE SHADOW OF HIROSHIMA AND NAGASAKI: POLITICAL, MORAL AND THEOLOGICAL REFLECTIONS 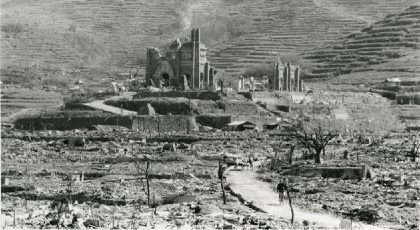 Please join us on Thursday, October 8, from 5:00 – 7:45 p.m., for a virtual program commemorating the 75th anniversary of the atomic bombing of Hiroshima and Nagasaki titled “The Promise of Peace in the Shadow of Hiroshima and Nagasaki: Political, Moral, and Theological Reflections. Keynote lectures will be given by the Archbishop of Nagasaki, Joseph Mitsuaki Takami, and Daniel Ellsberg, who famously leaked the Pentagon Papers in the hope that they would end the Vietnam War and author of “The Doomsday Machine: Confessions of a Nuclear War Planner.”

The Promise of Peace in the Shadow of Hirsohima and Nagasaki: Political, Moral and Theological Reflections

5:15 - 6:00 p.m.
Lecture by Daniel Ellsberg, "Renouncing the Doomsday Machine: Reflections on the Ethics of Threatening Omnicide"

6:15 – 7:00
Lecture by Archbishop of Nagasaki Joseph Mitsuaki Takami, “What is True Peace?”

Archbishop Joseph Mitsuaki Takami, P.S.S., has served as the Archbishop of Nagasaki since 2003 and as the President of the Catholic Bishops’ Conference of Japan since 2016. Archbishop Takami was born in Nagasaki in March 1946 and was educated and trained at the Saint Sulpice Seminary of Fukuoka, Pontifica Università Gregoriana, and L’Institut catholique de Paris. He is an atomic bomb survivor (He was in his mother’s womb at the time of the bombing). He is also a descendant of Japan’s “hidden Christians” who were persecuted for over 250 years. Archbishop Takami has been an influential leader in Japan’s Catholic and interreligious efforts to promote the vision of a world without nuclear weapons. The archbishop will speak about the history of the Catholic Church’s engagement with nuclear weapons-related issues in Nagasaki, where approximately 8,000 Catholics perished in the bombing, as well as broader theological issues concerning the relationship between forgiveness and justice.

In 1959, Ellsberg became a strategic analyst at the RAND Corporation and a consultant to the Defense Department and the White House, specializing in problems of the command and control of nuclear weapons, nuclear war plans, and crisis decision-making. Ellsberg joined the Defense Department in 1964 as Special Assistant to Assistant Secretary of Defense (International Security Affairs) John McNaughton, working on the escalation of the war in Vietnam. In 1965 Ellsberg transferred to the State Department to serve two years at the U.S. Embassy in Saigon, evaluating pacification in the field.

After returning to the RAND Corporation in 1967, Ellsberg worked on the top-secret McNamara study, U.S. Decision-making in Vietnam, 1945-68, which later came to be known as the Pentagon Papers. In 1969, he photocopied the 7,000-page study and gave it to the Senate Foreign Relations Committee. In 1971 he gave it to the New York Times, the Washington Post and 17 other newspapers. Ellsberg’s subsequent trial on twelve felony counts, posing a possible sentence of 115 years, was dismissed in 1973 on grounds of governmental misconduct against him, leading to the convictions of several White House aides and figuring in the impeachment proceedings against President Nixon.

Since the end of the Vietnam War, Ellsberg has been a lecturer, scholar, writer and activist on the dangers of the nuclear era, wrongful U.S. interventions and the urgent need for patriotic whistleblowing. He was awarded the 2006 Right Livelihood Award in Stockholm, Sweden “…for putting peace and truth first, at considerable personal risk, and dedicating his life to inspiring others to follow his example.”

Ellsberg is the author of four books: The Doomsday Machine: Confessions of a Nuclear War Planner (2017); Secrets: A Memoir of Vietnam and the Pentagon Papers (2002); Risk, Ambiguity and Decision (2001); and Papers on the War (1971).  He is a Distinguished Research Fellow at the Political Economy Research Institute (PERI) at the University of Massachusetts – Amherst; a Distinguished Researcher at UMass Amherst’s W.E.B. Du Bois Library; and a Senior Fellow of the Nuclear Age Peace Foundation.