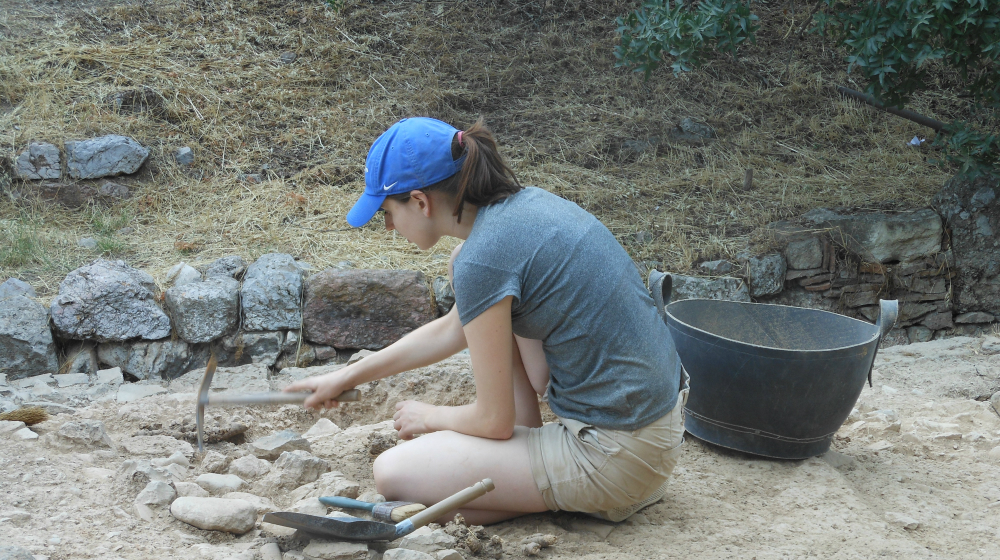 Professor Laura Gawlinski spent her first summer digging up artifacts at the Athenian Agora in Greece nearly 20 years ago. Now, she’s giving her students at Loyola a chance to do the same.

Dr. Gawlinski is a field supervisor for the Athenian Agora Excavations, an archaeological project run by the American School of Classical Studies at Athens. The program has been bringing in volunteers for decades to spend the summer excavating artifacts left in the ancient city square during the Bronze Age, Classical, and Medieval periods.

Dr. Gawlinski first learned about the project through a Greek professor when she was an undergraduate student at Randolph-Macon College. After spending her first summer in the eight-week program, she returned almost every year after, eventually earning a position as a site supervisor for the excavations.

In her time there, she’s participated in the excavation of what may have been the headquarters for a group of government officials, and has found objects ranging from ancient coins to storage vessels – and a lot of pottery.

“Our director jokes that everyone in Ancient Athens was either making or breaking pottery.”

When Dr. Gawlinski came to Loyola in 2008, it had been almost ten years since the last student from the university had participated in the program. Admission to the program is competitive, but Gawlinski was able to recommend students who had first taken her Archaeology class.

Since 2009, she’s taken six Loyola students with her to Athens, almost all of whom ended up excavating for more than one summer. One former student was even promoted to assistant supervisor after spending four years with the program.

This summer, Dr. Gawlinski was joined by Hannah Slough, a senior classical studies major at Loyola.

Slough was particularly interested in Greek mythology and art while growing up, and spent a great deal of time pouring through the history and fables of the country.

After first learning about the opportunity two years ago, she took Dr. Gawlinski’s class last spring and applied and earned a spot in the program.

Student volunteers like Slough are given housing and a food stipend, and the chance to work directly with ancient artifacts. But with it comes intense labor: a typical day for excavators starts bright and early at 7 a.m. The digging continues until about 2 p.m., when the summer heat is at its worst.

“There are a lot of long and grueling days,” Slough said, “but I’ve found that the hard physical labor gives you an even deeper connection to what you’re doing.”

Slough plans to return to the Agora, and is interested in pursuing museum work in the future as well.

“It was incredible to get that hands-on experience,” Slough said. “Dr. Gawlinski really helped bring literary and material history together for me.”