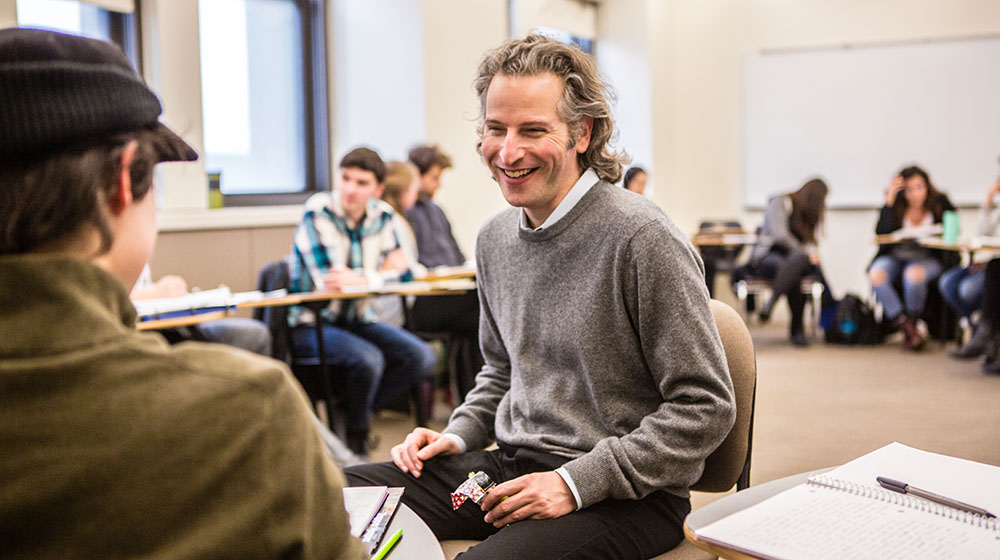 English lecturer Howard Axelrod teaches the "Literature from a Writer's Perspective" course in the Mundelein building at Loyola's Lake Shore campus in March 2017. Axelrod's memoir, "The Point of Vanishing: A Memoir of Two Years of Solitude," was released last year. (Photo: Heather Eidson)

Howard Axelrod’s road to Loyola is an unusual one for an educator.

It started in 1994, while he was a student at Harvard University and was jabbed in the eye during a pick-up game of basketball—a freak accident that left him permanently blind in one eye. Five years later and after a failed romance in Italy, he decided to move into a small house in the woods of Vermont.

Out of that experience came his memoir, The Point of Vanishing: A Memoir of Two Years in Solitude, which made the “Best of 2015” lists for publications such as Slate and the Chicago Tribune.

Now, Axelrod is bringing the knowledge he gained from living in almost complete isolation to his creative writing courses at Loyola.

“I feel like it’s my job, and really the job of a college education, to help you develop the kind of mind that you want to live with, that you’re comfortable living with, and that is going to help you live well,” Axelrod said.

It’s an approach he brings to his nonfiction-writing workshop, where creative writing majors work together developing their personal stories and the tools to pen them.

“I haven’t talked to them too much about my memoir,” Axelrod said. “But I’ve had friends Skype into the class who have also written memoirs. Then students can ask them questions, and that’s just gone great in part because my friends are generous people—but also because the students had such good questions.

“They could see that everyone struggles with writing, and everyone has different approaches. So, it’s not as though I’m giving them some sort of party line.”

When it was released, Axelrod’s memoir was compared to Henry David Thoreau’s Walden and Jon Krakauer’s Into the Wild. Today though, what sticks with Axelrod are the individual responses from readers who found that his story resonated with their own painful experiences.

“They would tell me very personal stories,” Axelrod said. “For three readings in a row, there was someone who had a child die in a car crash. There’s no way to respond other than to listen.  It’s so much worse than anything I’ve gone through. That’s what surprised me the most: the emails and all the letters I got from people saying how the book connected with their lives.”

For Axelrod, the experience has shown him the importance of continuing in the footsteps of the writers who impacted his life—something he’s been able to bring to his teaching as well.

“Now I’m also thinking who is going to come after, and that’s part of what is so gratifying about teaching,” Axelrod said. “When you see students who are talented or who are really engaged, you think, ‘Oh literature is going to be in good hands and it’s going to keep going.’

“My job is to be another link in that tradition and to write my books, but it’s also to pass on the tradition—pass on what other writers have passed along to me.”