The 42nd annual Edward Surtz Lecture in the Humanities 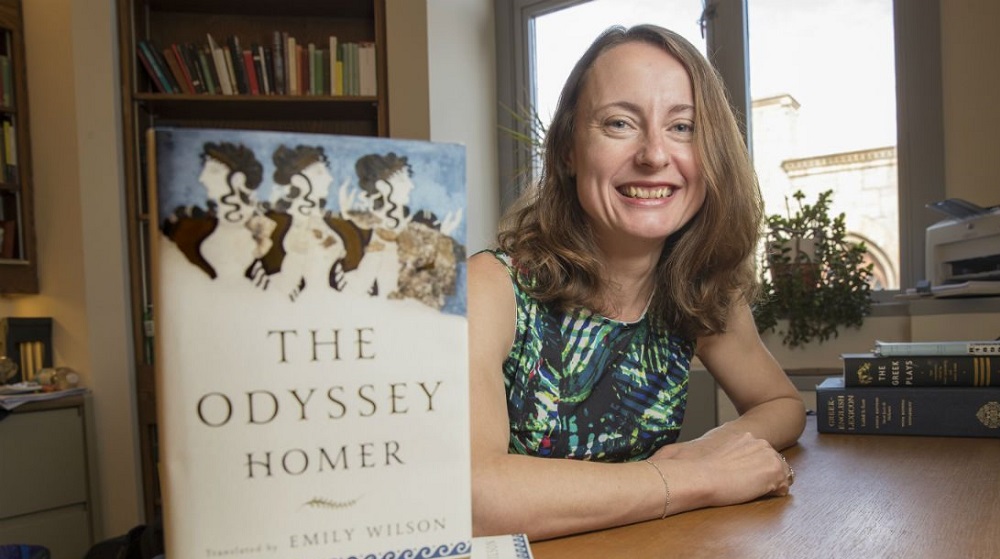 Professor Wilson will read from her new translation of the Odyssey and discuss her approach to this project. Her translation appeared from W.W. Norton in November 2017. It has received significant press attention in the New York Times Magazine and elsewhere.

Wilson is Professor of Classical Studies and Chair of the Graduate Program in Comparative Literature and Literary Theory at the University of Pennsylvania. She holds degrees from Oxford and Yale in Classical Studies, English Literature, and Comparative Literature. Her previous books include Mocked with Death: Tragic Overliving from Sophocles to Milton (2004), The Death of Socrates: Hero, Villain, Chatterbox, Saint (2007), The Greatest Empire: A life of Seneca (2014) and verse translations of the tragedies of Seneca and Euripides. She is also classics editor for the new Norton Anthology of World Literature.

Founded in 1973, the Surtz lecture aims to promote interdisciplinary and trans-historical humanistic inquiry in the university today. This annual endowed lecture honors the memory and scholarship of Edward L. Surtz, S.J., a beloved member of the Loyola faculty and distinguished scholar of early modern literature and renaissance humanism, perhaps best known for his work on the writings of Thomas More. Previous speakers have included Jaroslav Pelikan, Caroline Walker Bynam, and Katherine Hayles. The 2016/17 lecture was delivered by Ato Quayson, who spoke on “Postcolonial Tragedy and the Education of Desire.”

In conjunction with this year’s Surtz lecture, the Departments of English and Classical Studies announce a competition in creative writing. Current Loyola undergraduates are invited to respond, in five pages or fewer, to the following question:

“Where are Odysseus and Penelope today?”

Entries may be verse or prose. Authors of the top three submissions will be awarded signed copies of Emily Wilson’s translation of Homer’s Odyssey. Winners will be announced on Tuesday, April 10, at the 42nd Annual Edward Surtz Lecture, where Professor Wilson will read from her translation and speak about her approach to translating Homer.

Entries are judged blind. Your name must not appear on your entry. Instead, choose a pseudonym containing more than one word to avoid possible duplication, and put the letters ps (for “pseudonym”) in parentheses after it. Print your pseudonym and the title of your submission at the top of the first page. For example:

All entries should be double-spaced and accompanied by a separate covering sheet containing the following information: (1) your real name; (2) your pseudonym; (3) the title of your submission.

Submit three copies of your contest entry and one copy of your covering sheet to Stephen Heintz in the English department office (Crown Center, 4th floor). Entries must be received by 5:00pm on Thursday, 5 April.