The Present, the Past, and the Material Object: the Svaglic Chair's Inaugural Lecture 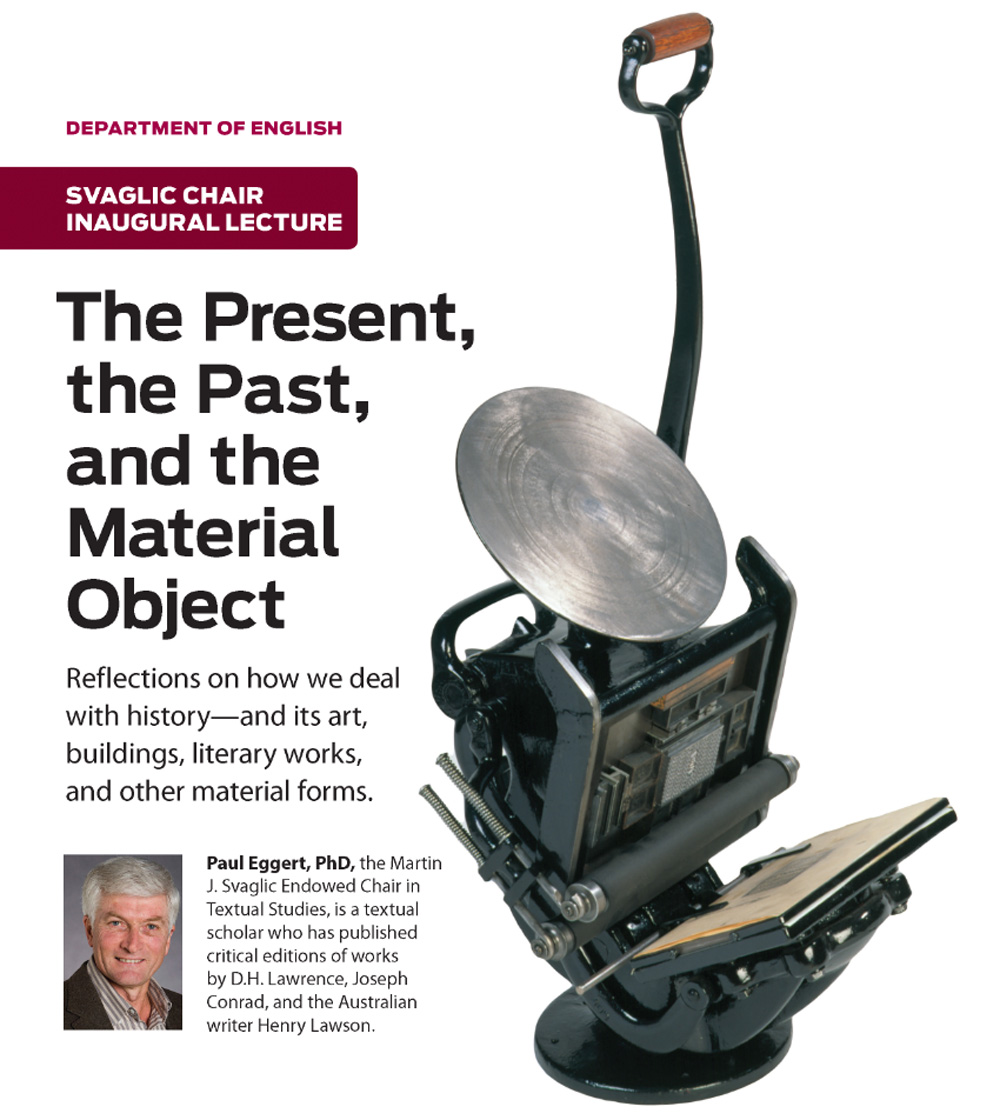 C‌lick here‌ to download a PDF version of the flyer.

Thomas Hardy the poet, and famously the author of Tess of the D’Urbervilles, had previously been a professional architect and restorer of medieval church buildings. When he could afford to do so he gave up his professional life for writing, but an abiding attitude toward the past and its material manifestations links the two. In his literary works he frequently returned to the possibility of recovering the past, to the conditions of that recovery and thus to the nature of its ongoing life in the present. Not only the ancient natural landscape but also the historic built environment served as the vital link.

Prof. Eggert’s lecture will start with discussion of a poem of Hardy’s that will serve as a spur for a reflection on the general conditions of our dealings with the past, especially as engaged by its material forms, whether in buildings or art works or literary works. Distinctions between the forms are of course necessary but, he will argue, continuities remain: the mute testimony of the material object concerning the agents of its creation; the role of the viewer or reader in realizing the work; the hand of the editor or conservator; and the role of time in its successive forms of existence.

This line of reflection issues finally in some predictions about the forms that scholarly editing and archiving will soon take, now that their material basis is changing. In the digital realm, what relation will the two responsibilities have to one another now that that they can be disaggregated rather than presented with the seamless continuity and stability expected of the printed form?

Emeritus is an editorial theorist, scholarly editor and book historian. Earlier this year he moved from the University of New South Wales in Australia to the English Department at Loyola University Chicago to take up the Martin J. Svaglic Endowed Chair in Textual Studies.

In his book Securing the Past: Conservation in Art, Architecture and Literature Eggert extended the purview of editorial theory to encompass the different but, as it turned out, parallel discourses surrounding the conservation of historic buildings and art works, and the nature of forgery. The book was published by Cambridge University Press in England in 2009; it won the Society for Textual Scholarship’s Finneran Award as the best book of editorial theory for 2009–10. Eggert subsequently served as President of this US-based society for 2013–2014.

His later thinking about the empirical realities of the textual condition may be found in his Biography of a Book (Pennsylvania State University Press, 2013). Over the years, full-scale scholarly editions of works by D. H. Lawrence, Henry Kingsley, Rolf Boldrewood, Henry Lawson and Joseph Conrad have appeared under his hand. The most recent of these, an edition of Conrad’s novel Under Western Eyes, was published in 2013 in the Cambridge Works of Conrad series.

An elected fellow of the Australian Academy of the Humanities since 1998, Eggert served as the general editor of its Academy Editions of Australian Literature (10 vols, 1996–2007) and received the Centenary Medal of the Commonwealth of Australia for services to the study of literature in 2003.

A recent article of Paul’s in Textual Cultures, his presidential address to the Society for Textual Scholarship entitled ‘The Hand of the Present’, may be found at http://www.jstor.org/stable/10.2979/textcult.7.2.3