Modernism and Its Texts 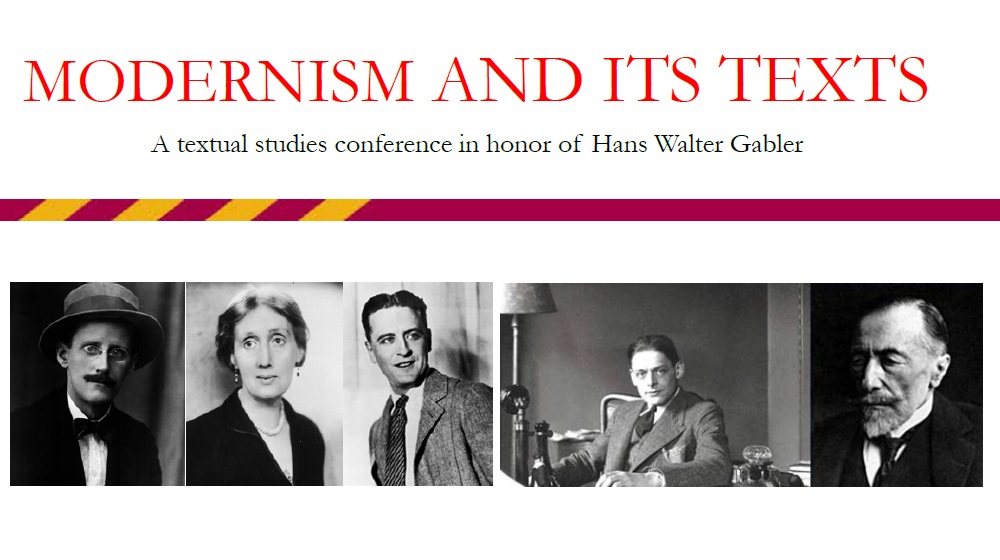 This gathering of distinguished general editors and editors of scholarly editions of the works of some of the major figures in Modernist literature will be the first of its kind. It will offer the opportunity to assess the diverging trends and methodologies in editorial procedure in both print and digital editions that have been emerging over the last few decades. The role of a press, questions of audience, shifts in the understanding of textual authority, and attendant theoretical-empirical issues will receive discussion as a future for editing is brought into focus.

Day Conference: Modernism and its Texts
In honor of Hans Walter Gabler

Plenary Lecture:
Roger Osborne, The University of Queensland, Editor in the Cambridge Works of Conrad “The Implications of Editorial Disagreement: The Cambridge, Penguin, and Norton Editions of the Works of Joseph Conrad”

Jane Goldman, University of Glasgow, Scotland, Co-General Editor of the Cambridge Works of Virginia Woolf, “Is There a Feminist Textual Editing?”

Book launch during the reception (4.15pm): Peter Shillingsburg’s Textuality and Knowledge (PennState UP, 2017), to be launched by James West (10 minutes) with a reply from Shillingsburg (5).

Dinner for speakers and respondents

Hans Walter Gabler, emeritus professor at the University of Munich, was famously responsible for the highly contested critical and synoptic edition of James Joyce’s Ulysses (1983), a brilliant achievement whose legacy in textual studies and digital humanities continues to this day. He subsequently prepared critical editions of Joyce’s Dubliners and Portrait of the Artist. He has more recently turned his attention to the textual study of Virginia Woolf. The theoretical implications of his editorial work have ramified through a series of powerful essays in editorial theory making him one of the most influential editorial thinkers in the field today.

James L. W. West III is Edwin Erle Sparks Professor of English at Pennsylvania State University.  He is a biographer, book historian, and scholarly editor.  He is currently at work on a Variorum edition of F. Scott Fitzgerald’s classic novel The Great Gatsby (1925).

Roger Osborne has taught Australian and American literature at several Australian universities. He is a contributing editor to the Cambridge Edition of the Works of Joseph Conrad (Under Western Eyes and Nostromo), and publishes widely in the fields of book history and digital humanities. His Joseph Furphy Digital Archive was published in 2015, and his book with David Carter, Australian Books and Authors in the American Marketplace 1840s-1940s, is forthcoming from Sydney University Press.​

Ronald Schuchard, Goodrich C. White Professor of English, Emeritus, at Emory University, is the author of Eliot’s Dark Angel (1999) and The Last Minstrels: Yeats and the Revival of the Bardic Arts (2008). He is the editor of Eliot’s Clark and Turnbull Lectures, The Varieties of Metaphysical Poetry (1993); co-editor with John Kelly of The Collected Letters of W. B. Yeats, volumes 3, 4 and 5 (1994, 2005, 2017); and General Editor of the eight-volume Complete Prose of T. S. Eliot: The Critical Edition, five volumes of which appear online on Project Muse, Johns Hopkins University Press.

David E. Chinitz, professor of English at Loyola, is the author of T. S. Eliot and the Cultural Divide (Chicago, 2003) and Which Sin To Bear? Authenticity and Compromise in Langston Hughes (Oxford, 2013). He is most recently co-editor, with Ronald Schuchard, of The Complete Prose of T. S. Eliot. Volume 6: The War Years, 1940-1946 (Johns Hopkins, forthcoming).

“Leading a Scholarly Edition into the Digital Age:
Forty Years of Steering James Joyce's Ulysses Through Turbulences of Textual Scholarship”

It was back in 1973 that I first heard of hopes that the future for scholarly editing might lie in computer support. In the same year, I gathered early outlines of challenges ahead for whoever might muster the courage to edit James Joyce’s Ulysses. Here was a peak in World Literature of the 20th century for which notes, manuscripts, typescripts, serial publications of 14 chapters, and multiple proofs of the first edition had been preserved; and for which the first edition published in 1922 carried the note of apology: “The publisher asks the reader’s indulgence for typographical errors unavoidable in the exceptional circumstances.” Closer scrutiny soon revealed not just the typographical errors deplored. It laid bare, rather, a wider field of departures in the first edition from the text progressively written for Ulysses and successively inscribed by Joyce into the range of documents preserved. Editorial methodology in the United States and Great Britain was not comfortably equipped to handle archival diversity as extant for Ulysses. By contrast, diversities of the kind were familiar to German scholarly editing oriented towards the composition and growth of texts. Yet the German editorial school, in turn, knew little of the rules prevalent for Anglo-American critical editing. What Ulysses required in terms of editorial procedure was a merger of the methodologies. An editorial recording and unfolding of the novel’s pre-publication history of composition in particular, moreover, cried out for a harnessing of computer support. From all extant evidence of Joyce’s writing Ulysses, and with the double aim of both displaying the growth of the text from fair copy to first edition, and of critically establishing a reading text, a team of dedicated collaborators and I in Munich edited Ulysses afresh from the ground up. Work began in 1978; the three-volume Critical and Synoptic Edition was published in 1984. In my talk, I will first dance through some patterns of our editorial work and the formats of the edition’s book-page presentation, as well as mention passing turbulences during the years of editing. I will then outline the veritable roller-coaster reception the edition received, with high praise as well as some fierce, albeit temporary, turbulences of opposition against it. In conclusion, I will demonstrate how today’s updating of our digital archive of the 1978-1984 editing period has enabled a generation renewal of the Critical and Synoptic Edition of 1984 in book form into a dynamic online Digital Critical and Synoptic Edition which now, in younger hands, is well under way to be fully realized for the engagement and use of future readers, students, and researchers of James Joyce’s creativity and workmanship in writing Ulysses.

“The Implications of Editorial Disagreement: The Cambridge, Penguin, and Norton editions of the Works of Joseph Conrad”

In this paper Roger Osborne traces the history of scholarly editions of the works of Joseph Conrad from the foundational textual scholarship at Texas Tech in the early 1970s through to the present day. Osborne considers the aspirations for a digital edition of Conrad's works alongside the editorial rationales that have guided the flurry of scholarly and commercial editions published in recent years. He pays particular attention to the Cambridge editions and the  "disagreements" of Paul B. Armstrong's Norton more 2016 edition of Heart of Darkness. Osborne argues that such editorial disagreement should inform the theoretical and practical framework of any future plans for scholarly editions of Conrad's work in either print or digital forms.

“Yeats and Eliot Redivivus: The Collection and Digital Presentation of T.S. Eliot’s Multiform Texts in The Complete Prose”

The late Valerie Eliot’s commission of The Complete Prose of T. S. Eliot: The Critical Edition, with six of the eight volumes “live” on Project Muse of Johns Hopkins University Press, has made possible an expanded conception of what constitutes a “Complete” edition. In addition to the major collections of prose from The Sacred Wood (1920) through To Criticize the Critic  (1965), the edition includes all of Eliot’s uncollected prose, including his Criterion Commentaries, over 200 printed items unrecorded in the Gallup bibliography, and over 100 unpublished items, all arranged in chronological order of publication or composition from 1909 to 1965: juvenilia, undergraduate and graduate essays, reviews, letters to the press, syllabuses, broadcasts, prefaces and introductions, addresses to charities, schools, and churches, prefaces and introductions, documents signed with multiple authors, lectures reconstructed from partial transcriptions and reports. This paper will discuss a selection of texts from this vast repository, focusing on the role of the Eliot, Faber, and institutional archives, the creation of an electronic database, the editorial procedures and principles for editing and annotating published and unpublished texts, copyright laws and the exclusion of most American editions as copy-texts, the role of Emory digital encoders, Johns Hopkins Press, and Project Muse, and the relation of the digital edition to the forthcoming print edition and digital platform.

“The Cambridge Fitzgerald: An Intentionalist Edition”

In this paper West will outline a history of the 18-volume Cambridge Edition of the Works of F. Scott Fitzgerald—its founding, progress, and approaching completion.  The Cambridge Fitzgerald is an intentionalist edition; it publishes what Fitzgerald wrote, not what various of his editors thought he should have written.  This effort has been aided enormously by the fact that Fitzgerald was a pack rat.  He saved an extensive archive of holographs, typescripts, proofs, correspondence, and other materials that make it possible to trace the compositional history of much of his oeuvre and to discern his intentions, in so far as editorial skill and imagination can allow.  West will offer examples from the published volumes of the Cambridge Fitzgerald and from the recently completed Variorum edition of The Great Gatsby.

The question of how much annotation is too much has dogged the editing of T. S.
Eliot’s texts since 1996, when Eliot’s apprentice poems were published as Inventions
of the March Hare with copious notes by Christopher Ricks. For different reasons, the
question has arisen again—though only behind the scenes—with respect to the
ongoing Complete Prose series. It seems surprising that few reviewers of the recent
two-volume scholarly edition of the Poems, edited by Ricks and Jim McCue, have
expressed any qualms, since the same methods that were controversial two decades
ago have been employed in these volumes’s extremely generous annotations. Beyond
suggesting possible reasons for this change of critical heart, I will show that,
depending on what one considers to be the proper function of annotation, the Poems
may even be in some respects underannotated. Moreover, the different critical
perspectives from which these various judgments may be rendered are not arbitrary
or capricious; rather, they reflect divergent ways of looking at and in turn
representing Eliot and modernism generally.

“Is There a Feminist Textual Editing?”

This paper is in three parts:
(1) Authority and the Cambridge Woolf – An Edition of Record;
(2) Queenly Authority in the Textual Apparatus & Explanatory Notes of the Cambridge University Press Edition of Orlando: A Biography;
(3) Hans Walter Gabler and To the Lighthouse.
The paper reflects on my work for the Cambridge Woolf as general editor and volume editor, drawing on arguments in recent and forthcoming presentations and publications on editing Woolf. It considers the possibilities and ramifications of a feminist textual editing; it explores the critical stakes of a startling textual variant in the early impressions of Orlando recently discovered by the Cambridge editors; and it will also engage with Hans Walter Gabler’s productive insights into some of the challenges of editing To the Lighthouse.