The Arts of Adaptation 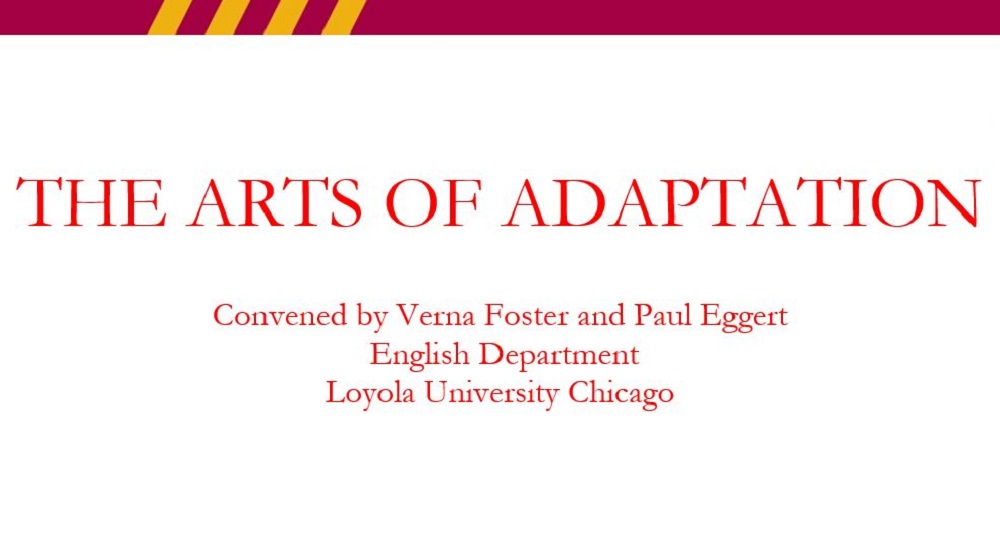 "Adaptation is almost coterminous with literature, indeed with all of human creativity. Almost every work of art can be seen as adapted from something else: from another work of art in the same or a different genre or medium, from mythology, history, biography, current events, scientific research, nature. The list of possible and potential sources is as endless as the ways of adapting and the forms of adaptation. Cave painters adapted scenes from hunts, the Greeks adapted myths, Shakespeare adapted stories and historical chronicles, and innumerable authors have adapted the Greeks and Shakespeare. In the mid-twentieth century when scholars embarked on the academic study of adaptation, they began with dramatization: that is, with the remediation of literary works into the contemporary dramatic medium of film. Today, adaptation studies cover intra- and intergeneric as well as intermedial adaptations in film, fiction, drama, poetry, and digital media."

Verna A. Foster is Professor of English at Loyola University Chicago, specializing in dramatic genre, dramatic adaptations, and their relation to reception. Her publications include The Name and Nature of Tragicomedy (2004), the edited collection Dramatic Revisions of Myths, Fairy Tales and Legends: Essays on Recent Plays (2012), and numerous articles. Her work in adaptation studies includes essays on dramatic revisions of Chekhov’s The Three Sisters and Woody Allen’s reworking of A Streetcar Named Desire in his film Blue Jasmine. Her most recent article is “Meta-melodrama: Branden Jacobs-Jenkins Appropriates Dion Boucicault’s The Octoroon” in Modern Drama (Fall 2016).

Paul Eggert is Martin J. Svaglic Endowed Chair in Textual Studies, Loyola University Chicago. He most recently edited Henry Lawson’s While the Billy Boils: The Original Newspaper Versions (2013). This followed editions for the Cambridge Works of Lawrence and the Works of Conrad series, as well as for the Academy Editions of Australian Literature. A theorist of the editorial act, Eggert’s principal arguments are brought together in Securing the Past (2009) and Biography of a Book (2013). He is past president of the Society for Textual Scholarship and a corresponding fellow of the Australian Academy of the Humanities.

Trained as a literary scholar at Columbia and Yale, Thomas Leitch drifted into cinema studies when he discovered a love of storytelling that transcended literature. Even before he came to the University of Delaware to direct the Film Studies program, he had already begun to explore this love in his first book, What Stories Are: Narrative Theory and Interpretation. Since then, he has continued to build bridges between literature and cinema studies in ten books and over a hundred essays. Since preparing an annotated bibliography of his teacher Lionel Trilling, he has published extensively on narrative theory, genre theory, and popular culture. In addition to Perry Mason and Crime Films, which was nominated for an Edgar Allan Poe Award in 2003, he has written two books on Alfred Hitchcock and coedited a third. For the past ten years, most of his work—especially Film Adaptation and Its Discontents: From Gone with the Wind to The Passion of the Christ—has focused on the process of textual adaptation and its broader implications for the teaching of English. His most recent books are Wikipedia U: Knowledge, Authority, and Liberal Education in the Digital Age and The Oxford Handbook of Adaptation Studies. He is currently working on The History of American Literature on Film. He regularly reviews mystery and suspense fiction for Kirkus Reviews, where he is Mystery Editor.

Siobhan O’Flynn, a digital humanist, has extensive experience working in and consulting on interactive storytelling, digital media, and experience design. She is currently working on a monograph for Routledge, to be called Mapping Digital Narrativity: Design, Practice, Theory, which examines the impact of digital media on storytelling by recontextualizing Aristotle’s theory of tragedy and catharsis as a form of experience design.

‘Why Adapt? The Cultural Work of Dramatic Adaptation’

After surveying some of the cruxes in adaptation theory, including the relationship between text and performance in dramatic adaptation, this paper focuses on the cultural work performed by intrageneric dramatic adaptations with special reference to Mabou Mines Dollhouse, contemporary Medea plays, and Branden Jacobs-Jenkins’s An Octoroon.

‘Textual Criticism and the Curious Art of Adaptation: The Ned Kelly Story’

Replication and revision is a definition of Adaptation study. Textual criticism is the study of versions. Must these related pursuits continue to proceed in ignorance of one another? The paper addresses this question squarely, based on a case study of the versions and adaptations of the Ned Kelly outlaw-bushranger story-type.

‘Screening (Out) the American Short Story’

Although Hollywood has looked since its earliest days to novels and plays for properties that could be profitably adapted to the cinema, it has rarely drawn its source material from the American short story, despite the genre’s prominent status in American literature. This presentation investigates the reasons why.

In the digital world, multi- and trans-media elements, situations, and contexts deliberately invite audience participation in experiences allowing entry into the ‘storyworld,’ to co-create and extend content. Originating in the field of Human Computer Interaction, and now central to game design, marketing, and top-tier branded transmedia productions, experience design recognizes its media-fluent audience (i.e. people) as a medium.