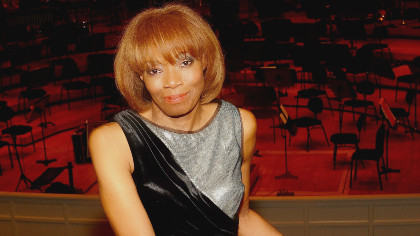 Receiving a PhD is a difficult feat. So is receiving a Grammy. But Loyola Professor Willetta Greene-Johnson can say she has achieved not just one, but both in her lifetime.

As one of the first African-American women in the country to obtain a PhD in theoretical physics, Dr. Greene-Johnson has taught at Loyola University for over 25 years for the Departments of Physics and Chemistry.

At the same time, Dr. Greene-Johnson has created a name for herself in the music world as an accomplished composer, arranger, and songwriter. She wrote the lead song, “Saved” on the 2004 CD by choir group Brooklyn Tabernacle Project, which won the Grammy Award for Best Gospel Choir Album that year.

Local publication and historical newspaper The Chicago Defender even named her one of the Women of Excellence in 2010 for her notable achievements in music.

In addition to her songwriting, she has been involved with the Chicago-Sinfonietta for over six years, serving this year as a guest conductor for their annual Martin Luther King Concert, for which she arranged two of the four pieces featured.

Here, Dr. Greene-Johnson discusses her work and how both music and science have enriched her life.

What influenced your decision to become a professor?

My parents were both scientists. My mother, a research chemist, was one of the first dozen black women to receive a PhD in Chemistry, and my father was an engineer who trained Tuskegee Airmen. I was always skilled in science and math, but I also wanted to study music in college. My parents steered me in the opposite direction, knowing science would pay the bills.

With both your parents’ backgrounds being in science, how did music play into your early life?

Although we heard a lot of science terms growing up, my parents greatly enjoyed music too. My mother would listen to artists like Ella Fitzgerald and Barbara Streisand, and my dad was fond of bands such as The Beatles and Earth, Wind, and Fire. It was a wonderful mix of genres that swung from Beethoven to James Dean.

With so many genres of music around you, what attracted you to orchestra and gospel music?

One of my earliest memories is being taken into an auditorium for a concert when I was in second grade. The moment they started playing the music – Beethoven’s Fifth Symphony – I sat straight up in my seat, I was so struck by the music.

There’s something amazing about hearing all those different instruments working together. Their differences make something exquisite.

If only people could come together in the same way!

Some songwriters begin with lyrics and build around it. I tend to get the melody first and play with it until the right words associate, until they fit the melody.

Before I wrote “Saved,” I had this beautiful melody in my head for quite some time. Although that song was inspired by my mother’s death, I like to write about religion, love, and social justice as well. Music can bring people together in this way.

Do you ever struggle to balance your career as a professor and your music?

I am privileged to have a career that allows me three months each summer to work on my music. Although I’m typically immersed in teaching during the academic year, I split my time in the summer between researching physics topics, creating lessons, and writing and recording music.

Moreover, I feel that Loyola fully allows me to foster my creativity; the environment is very congenial and much different from other schools.

There’s been an increased focus on STEM education in K-12 schools as of late; how can we encourage science and math learning without forgetting about the arts?

The arts can help us in a lot of abstract ways. There are studies to show how music can improve cognitive skills, teamwork, and emotional well-being.

There is also a lot of math you can learn from music! It makes sense when you think about how many scientists have had an affinity for music. Many of my colleagues also enjoy playing instruments in their spare time; Dr. Gordon Ramsey even teaches a course on the Physics of Music.

I typically keep my music and teaching separate, but I’ve found that singing to students during a certain moment in class can calm them down - It’s comforting. Music is a healthy outlet for emotion; why would we want to take away something that can be a safe space for students?

Finally, knowing how successful you’ve been as a musician, would you have pursued music exclusively, instead of science, if you could go back in time?

I don’t think I would change anything. Science has enriched my life, as have my colleagues and students; they keep me young!