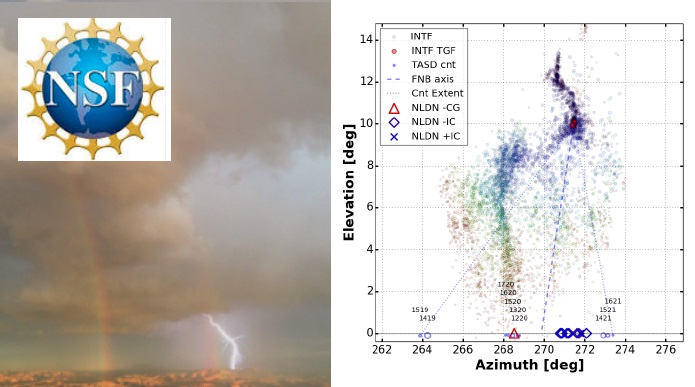 Even though thousands of terrestrial gamma-ray flashes (TGFs) seem to be produced inside thunderstorms, the mechanism responsible for producing them and how intra-cloud discharges relate to TGFs is still unknown. It is unknown how intra-cloud discharges are related to the TGFs that are primarily observed by orbiting satellites. Scientistst hope that TGFs observed from the ground can help us have a better understanding of the mechanisms responsible for producing TGFs. Dr. Rasha Abbasi, an assistant professor in the Loyola Department of Physics, recently published a new paper in the Journal of Geophysical Research: Atmospheres titled "Observations of the Origin of Downward Terrestrial Gamma-Ray Flashes" addressing some of these questions. This paper presents new observations of several events in which fast negative initial breakdown pulses (IBPs) produced the leader-stage energetic gamma-ray showers. These showers were observed by a broadband interferometer and fast spheric sensor in addition to the TA surface detector, lightning mapping array and slow antenna providing key information on their origins and the possible nature of the breakdown processes at work in atmospheric lightning.

Dr. Abbasi is also co-Primary Invesitgator on a National Science Foundation (NSF) grant ("Investigation of Downward Gamma Ray Showers from Natural Lightning") from the Division of Atmospheric and Geospace Sciences to study the origin of TGFs using the Telescope Array Surface Detector in Utah. We are trying to answer important questions in lightning research, such as how is lightning initiated and how can our own atmosphere produce energetic radiation in the x- and the gamma- ray region? With this grant, we will use the surface detector of the telescope array, in conjunction with existing and new lightning instruments, to understand how observed gamma flashes correlate with the initial breakdown pulses and energetic in-cloud pulses of lightning.