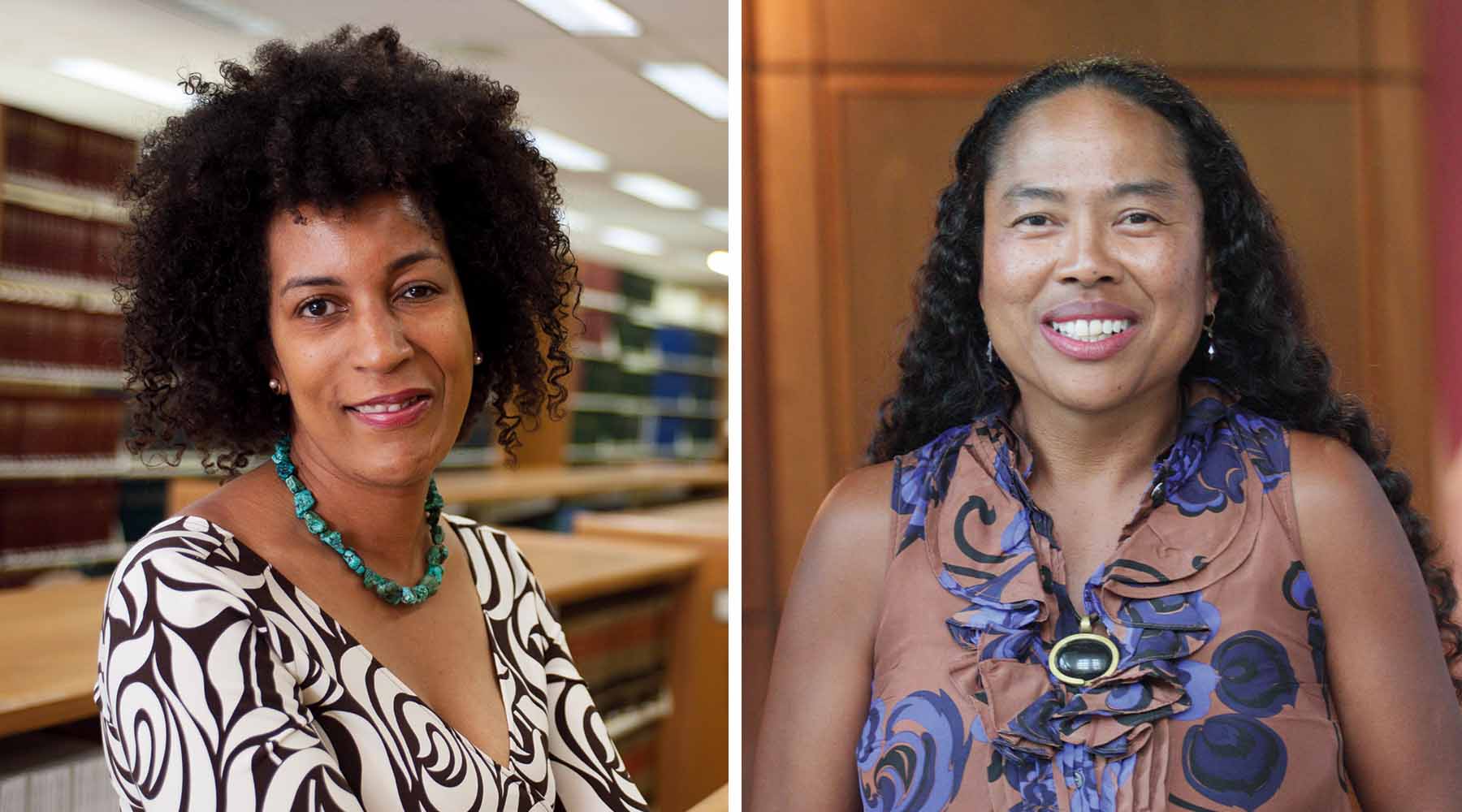 Jeannine Bell and Blanche Bong Cook will join the School of Law faculty this summer as Curt and Linda Rodin Professors of Law and Social Justice.

Loyola University Chicago School of Law is proud to announce that Jeannine Bell and Blanche Bong Cook will join the faculty this summer as Curt and Linda Rodin Professors of Law and Social Justice.

Professor Jeannine Bell will join us from Indiana University Maurer School of Law, where she is the Richard S. Melvin Professor of Law. A nationally recognized scholar in the areas of policing and hate crimes, Professor Bell has written extensively on criminal justice issues. Her research is broadly interdisciplinary, touching on both political science and law, and relying on her empirical expertise.

Her scholarship has appeared in the Harvard Civil Rights-Civil Liberties Law Review, Law & Society Review, Law & Social Inquiry, the Boston University Law Review, the Journal of Legal Education, and many other publications. Professor Bell’s research and writings have received national media attention in ProPublica, The New York Times, and USA Today, among other outlets.

She is an elected member of American Law Institute (2019). In 2018, she was honored with the Leon H. Wallace Teaching Award, the highest teaching award bestowed upon a faculty member of Indiana University Maurer School of Law.

Professor Bell earned her AB from Harvard College and both her JD and PhD from the University of Michigan.

“I look forward to working with Loyola students and my new colleagues as we search for answers to some of this country’s most difficult legal problems.”

As a Rodin Professor, she plans to use her Rodin funding to continue conducting research and producing scholarship in the areas of hate crimes and policing. This includes working this fall on a book based on more than 80 interviews with citizens who share their experiences with the police.

“I am very excited to join the faculty at Loyola Law School,” says Professor Bell. “The law school’s commitment to preparing students to serve as compassionate lawyers in a ‘diverse and interdependent world’ aligns with my own goals as a teacher and a scholar of hate crime and policing. I look forward to working with Loyola students and my new colleagues as we search for answers to some of this country’s most difficult legal problems.”

As a leading expert on sex trafficking and the commercialization and exploitation of women and girls, Professor Cook is actively involved in shaping the discourse on sex trafficking and victims’ rights as it relates to evidentiary issues, race-class-gender profiling, victim blaming, and sex-trafficking statutes. She writes in the areas of sex trafficking, victims’ rights, police violence, implicit bias, criminal procedure, critical race theory, human rights, race and gender discrimination, Black feminist legal theory, womanist thought, and the normative gaze of identity.

Before working in academia, Professor Cook served as an assistant U.S. attorney with the Department of Justice, where she specialized in large-scale drug and sex-trafficking prosecutions. As a federal prosecutor, she briefed and/or argued more than 44 federal appeals.

Professor Cook clerked for the Honorable Damon J. Keith of the U.S. Court of Appeals for the Sixth Circuit. She also served as an associate at Miller, Canfield, Paddock, and Stone in Detroit and Seyfarth Shaw in Chicago, where she specialized in employment discrimination, labor law, and sexual harassment litigation and prevention training.

Her years of practice in the public and private sectors inform her teaching philosophy and passion. Her mission is to deconstruct and make readily accessible and transparent the principles and practices of law in ways that are meaningful to students, not only for professional development, but also as a means of augmenting the role that advocacy plays within law and litigation.

Professor Cook earned her BA from Vassar College and JD from the University of Michigan.

As a Rodin Professor, she will use her Rodin funding to host an April 2023 sex trafficking conference, which will act as a capstone project for students taking her spring seminar. Panelists and moderators will include students taking the seminar, activists, prosecutors, defense attorneys, scholars, and politicians. In addition, she will be publishing a sex trafficking textbook through Westlaw.

“Loyola’s long commitment to social justice thoroughly inspires me, particularly during troubling times,” says Professor Cook. “Chicago is my historical home, and Loyola Law is my spiritual destiny. I cannot thank the leadership and faculty of Loyola Law enough for this blessing. It has taken me 16 years to get back home. I could never imagine a better way to do it.” (May 2022)