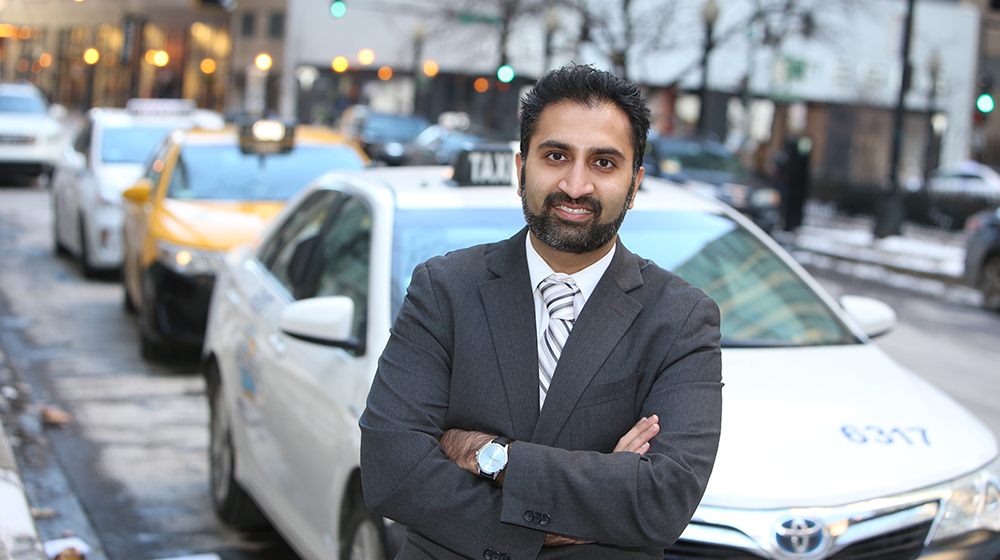 It’s no secret that the taxi industry has been decimated in the last few years by the rise of ride-hail services like Uber and Lyft. In Chicago, taxi medallion owners who once paid $350,000 to buy one of the city’s 7,000 licenses have seen their value plummet to less than $35,000. While it’s hard to argue with paying less for the same service, it’s not hard to see how unfair it is that the City of Chicago holds these drivers to two different standards.

“Now anyone can become a driver,” said Furqan Mohammed (BA ’08, JD ’12), who quit his job as a commercial litigator at a major Chicago law firm to help these small business owners who were at risk of losing everything. In early 2017, he cofounded Mohammed, Shamaileh & Tabahi, LLC, in Glenview, which has become the leading law firm in Illinois for negotiating and settling medallion debt.

“For decades, taxi operators leased a medallion and saved up to eventually buy one of their own,” he said. “For many immigrant families—from India, Pakistan, Ethiopia, Somalia, and other countries—medallion ownership was a way to build a middle-class life in America. But now many are severely underwater on their loans. Worse, it wasn’t just the medallion values that dropped, but also the income they generated.”

While providing free legal advice at a community center on Devon Avenue several years ago, a woman from Cab Drivers United asked Mohammed if he could talk to drivers who were behind on their payments. Their contracts were long, dense and backed by a personal guaranty. “They were on the hook personally, so every asset they had could be seized if they defaulted.”

Many of his clients came here 30 years ago thinking they would use a medallion as a retirement nest egg. Instead, they find themselves working 60 hours a week to earn half of what they used to earn.

Mohammed and his firm have renegotiated or settled numerous cases. Some lenders are willing to lower the payments, while others allow for a discounted cash buyout. But others refuse to budge, forcing these taxi operators to give up and file bankruptcy or work unsustainable hours to pay the loans.

“It breaks my heart to see these families suffering, and I’m grateful I was in a position to step up and help. I will continue fighting on their behalf.”